Excerpt from "Saint Theresa" by Andi Caldwell in 'If"

Andi Caldwell, and several other members of the Circle 8 Writers group, have been Facebook friends with me for a few years now. This talented group of writers has put together many anthologies of their collected short stories. Check out an excerpt from the story "Saint Theresa" by Andi.

Read an excerpt of "Saint Theresa"

When the doorbell rang, the last thing Theresa had expected were two policemen looking for her mother. When she told them she wasn’t home, they asked if they could wait. She had called her father and told him to come home. Since he owned the gas station around the corner from the house, he was home in ten minutes. One of the policemen started asking her questions. Still after so many years had come and gone, Theresa shook her head at the memory of how innocent she had been. When her mother had finally come home, the policemen arrested her. It had sounded like a television show.

“Mary Copeland, you are under arrest for having unlawful sexual relations with a minor. You are entitled to an attorney…” he said.

But it hadn’t been a television show. Her father had blustered and argued, but the police took her mother away. When she asked for an explanation, all he would mutter was, “Patrick, she’s been sleeping with Patrick.” Then he had gone to the cupboard and taken out the whiskey bottle. 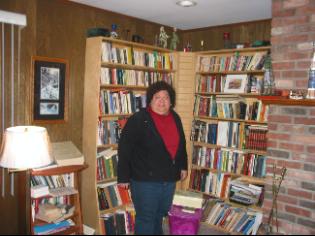 
Andi Caldwell has been writing short stories as long as she has been reading them. She is also a freelance writer and a teacher of special education students. She lives with her husband, two daughters and two cats.