Excerpt from "Protecting Molly" from 'Innocence End' by Angel Sharum

Angel Sharum and I have been in many writing groups together over these past few years. I got chills when I read the first line of her short story "Protecting Molly," which now appears in her latest collection, Innocence End. You can read that first line and more in this excerpt. The collection is a bargain, at a mere 99 cents on Amazon! 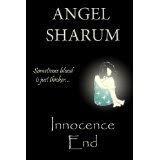 In a dramatic departure from her trademark tales of fun and horror, Angel Sharum offers within Innocence End two short stories of the real world many children have experienced but most adults would rather ignore:

1) The Beat Goes On portrays the brutality inflicted frequently on a daughter blamed for the death of her mother.

2) Protecting Molly takes the reader into the world of a girl whose father treats her not as a daughter as much as his substitute wife. Caution: Sharum holds nothing back in her depiction of the things one daughter will do to protect the youngest daughter from the brutality and depravity of their alcoholic father.

Though neither short story is for the squeamish, both are a herald of the return of the understated Southern narrative voice of such classic authors as Harper Lee and Truman Capote to American literature. ___Robert L. Arend, editor and contributing author of the Circle 8 Writers Group anthologies.


My sister grabbed my hand under our threadbare blanket and held on tight. I lay perfectly still, hoping our father would stumble back out the door. I should have known my luck wasn’t that good, but until that night I still had dreams that life would get better.

We both watched him teeter this way and that around the room. When he reached our pallet, he dropped to his knees. Molly and my hands clenched under the covers, but otherwise, we didn’t make a sound. We were waiting. I don’t believe either of us knew what we were waiting for, but, somehow, we knew things were about to change.

He grumbled under his breath, but I couldn’t make out what he was saying. When he started moving his hand back and forth in the darkness, me and Molly drew our legs up as far as we could. In the end, it didn’t matter. He still found me.

He grunted in satisfaction and pulled my legs back down. Then, while he held me in place with one hand, I heard him unbuckle his belt with the other. From her indrawn breath, I knew my sister heard it as well. We both braced ourselves for the beating we thought was coming.

Turns out a beating would have been a blessing.

Biography
Angel Sharum is a Georgia Peach who sometimes writes stories that are rotten to the core. Never one to shy away from voicing her opinion, Angel found the perfect venue to share her thoughts when she started writing non-fiction articles for online publications.

Writing short stories allows her to take readers on journeys of imagination that linger beyond "The End" and poetry offers a way for her to shake up people's emotions and make them think. According to Angel, when she accomplishes her goals a truly special connection exists between her and her readers.

Posted by Andi at 12:00 AM
Labels: childhood, Kindle, short stories