'The Problem With Power' Book Tour - Review and Interview 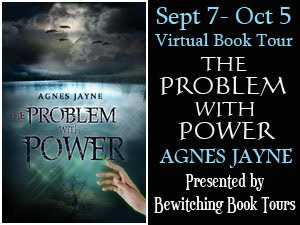 Welcome to the book blog tour for 'The Problem With Power' by Agnes Jayne! Check out my thoughts on the book and read some of the author's thoughts. 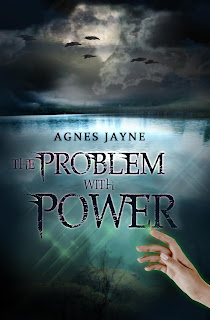 The Problem with Power by Agnes Jayne

Emily VonPeer hopes that she never meets the man of her dreams. For years, she's been haunted by visions of an unknown lover destined to die in her arms. When her aunt's death brings her home to her family's estate in Upstate New York, she meets Nicholas Flynn, an agent of Paladin, an enterprise dedicated to the study and eradication of demons, and the hero of her nighttime fantasies. He arrives on her doorstep seeking answers for a slew of magically-related murders tied to the VonPeer family.

Although his intentions are suspect, Emily follows Nicholas into the investigation, hoping to spare him the fate promised by her premonitions - at least, that's what she tells herself. When their exchange with a demon goes awry, Emily sustains an injury that threatens to turn her into a monster. Her transformation places her in the crosshairs of sorcerers, senators, and a seductive stranger who promises eternity.


Emily watched from the kitchen window as the lights from the far shore played on the waves of the river. She heard the ghost of a voice whisper to her, but she ignored it. The voice would wait until morning. Maybe the sunlight would settle her, stop the spinning in her soul from the flight, the funeral, and the horrible ache that came from the realization that for the first time in her life, she was truly alone. Even the moon had abandoned her, its thin light concealed by the clouds overhead. She rubbed the bridge of her nose, willing the loop of events to stop flashing through her mind, yet the pictures remained sharp as blades, begging her to remember, to fight, to avenge. But she didn’t know how or where to start. She only knew why. A single word popped into her mind.

Even now, the idea pulsed like blood in her head, but there was nothing that she could do. Someone had stolen the only thing that mattered from her, and at twenty-six years old she was, once again, an orphan.

It’ll be better in the morning, she thought.

She pulled the edges of Aunt Maeve’s bathrobe closer; it was a shade too tight across the shoulders. She went to bed searching her mind for a shred of meaning or a moment of significance to light her path. All she found was a memory.

**My thoughts**
Emily has grown up with her aunt, who appeared to merely be a healer who used plants and herbs. The House in which she lives is its own living entity and communicates with her. Somehow, she never really fathomed that she came from a family of witches, nor that she had her own powers. It was never discussed at home, just a part of her everyday life.

Emily's strength grows as she comes into her powers and fights alongside Nicholas. Nicholas also develops as he strives to prove himself to The Paladin. Together they become a dynamic duo of sorts, whose adventures would be fun to read in another novel.

I think one of my favorite characters is The House, who serves as the wise sage and protector.


Thank you for having me and allowing me to share a little bit about my debut novel, The Problem with Power.
Please share a little about yourself, your genres, any other pen names you use.
I work as an English instructor at a community college by day. I write literary fiction and poetry, but I’ve only had a few small works published to date.
Tell us a little about your latest or upcoming release.
The Problem with Power is a paranormal about a young woman, Emily VonPeer, who is struggling to come to terms with the death of her aunt. She is the last surviving member of an ancient family of witches, but the important part of the legacy is that she is left in charge of the family estate, Laurel Grove, an ancient stronghold of magic. As it turns out, a lot of people (and a monster or two) are very interested in Emily and her fate for their own selfish reasons.
Are you a mom (or parent)?
I am a mother to a wonderful boy who is about to turn six.
If yes do you find it hard to juggle writing and parenting?
I write very early in the morning so that I can concentrate. Sometimes I’ll get up as early as 4 a.m. to work on a story.
Have you ever based your book or characters on actual events or people from your own life?
No. I try to respect the boundaries of my friends and family in that way. However, there are certain traits of some of the characters that I see in people I know.
Is there a theme or message in your work that you would like readers to connect to?
You should question the institutions that claim to protect you.
Of all the characters you’ve ever written, who is your favorite and why?
Steph is my personal favorite character in the book. He’s quirky and strange, yet very powerful.
What book are you reading now?
On Writing by Stephen King and The Complete Works of Sherlock Holmes by Arthur Conan Doyle.
About the author:
Agnes Jayne began her writing career as a reporter for her high school newspaper in a small town in Northern New York. She completed her undergraduate degree in English and Political Science from Binghamton University. Upon her graduation from Binghamton University, she won a prestigious journalism fellowship at the New York State Senate, and went on to complete a Master of Arts Degree in English at the University of Albany. Following this, she worked as a political writer, producing speeches and other government documents for state and local politicians.
These days, she splits her time between writing and teaching classes in composition and literature at a small college in Maryland. She lives high in the Blue Ridge Mountains of West Virginia with her husband, son, and a plethora of adopted pets.
Website: www.agnesjayne.com
Twitter: @AgnesJayne
Facebook: https://www.facebook.com/pages/Agnes-Jayne/129185533835792
Goodreads: http://www.goodreads.com/book/show/13188328-the-problem-with-power
Posted by Andi at 6:48 AM
Labels: Bewitching Book Tours, excerpts, interview, paranormal, paranormal romance