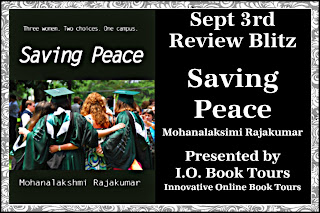 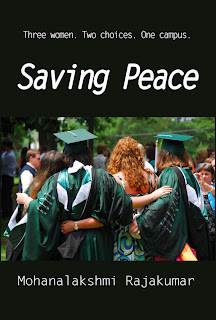 Thirty years intervene in the friendships begun at the all female Peace College.

Sib, the local news anchor with dreams of going national.

Saving Peace is the story of promises made and broken, love found then lost, and redemption sought for the past.

The idea of close girlfriends who had a strong bond in college, only to drift a few decades later, is one that can be a familiar one to may readers. It's natural for us to drift as our lives ebb and flow. One can only hope, though, that our lives are generally happier than those of the women in this story. All three of them are living a distorted illusion of the lives they had once dreamed for themselves. The happiness that they thought they knew when they were at Peace College could be a figment of their imaginations, but has to be based in some fact. They ache for those days and are reminded of it when they hear that their beloved college is going co-ed. There was something sacred about it being all-female. It created a solidarity between them that could stand the test of time, no matter how far apart they became.

I enjoyed the story about the three friends, how their relationship grew, and how they drifted. My only real problem was some anachronisms that appeared during the flashback scenes. For example, they kept referring to themselves as "Bridezillas" in the 1970s and 1980s as they were getting married. That term wasn't used for another 20 years. Also, they are watching The Golden Girls almost a decade before it aired, and talking about a cordless phone before those were even available. I had to go back to make sure I hadn't missed an update in the dates for that part of the book. And if I do the math correctly, Mary Beth's youngest child was born when she was around 50 years old.

The story ends with all of the women just beginning to see the truth about themselves. They are shocked, yet not surprised as they start to see who they are. While this book is designed to stand on its own, I think you could come up with a sequel as they try to fix all of the wrongs they have done over the years. I definitely think there is more to the story between Mae and Jackson, Siobhan and Mary Beth's kids. I would be willing to read it. 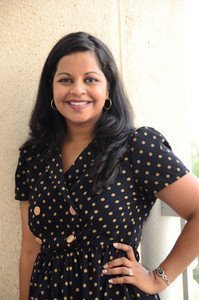 Mohanalakshmi Rajakumar is a South Asian American who has lived in Qatar since 2005. Moving to the Arabian Desert was fortuitous in many ways since this is where she met her husband, had a baby, and made the transition from writing as a hobby to a full time passion. She has since published five e-books including a mom-ior for first time mothers, Mommy But Still Me, a guide for aspiring writers, So You Want to Sell a Million Copies, a short story collection, Coloured and Other Stories, and a novel about women’s friendships, Saving Peace. Most recently, From Dunes to Dior, is a collection of essays related to her experiences as a female South Asian American living in the Arabian Gulf. After she joined the e-book revolution, she dreams in plotlines. Learn more about her work on her website at www.mohanalakshmi.com or follow her latest on Twitter: @moha_doha .