Review of 'As Time Goes By' 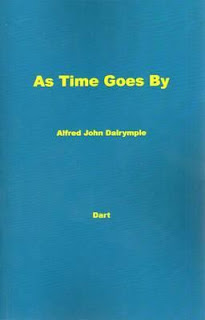 On the Everest trail, Alfred hires Nell Barton, Jangmu Sherpa to be porter, and to listen when he reads from his new book. Alfred believes that the Ground of Being is consciousness. He thinks time, distance, and size are part of it as is mass and its laws. He says consciousness affects this as to movement and immediacy allowing energy to be mass. Energy equals mass. E = M. The immediacy of consciousness allows the separable nature of reality assuring free will. The human "I" can make choices as separate from genes, other men, or the "I" of the Ground. Nell tells him his mother's milk had laughing gas in it. She questions, criticizes, and often agrees. Then very near the sun, they shower together and wash away the dust of human thought.

I honestly couldn't even finish this book. It made absolutely no sense to me. There was no way that the characters would have really been having this conversation. Perhaps there is something that I am missing. Perhaps there is a philosophical message within this text that I just do not have the mind to grasp. I am sure that some people are going to read it, love it, and understand it.

I'm not sure what it was that I was expecting. I think I was drawn to the part of the book description that said it was the story of a man traveling up Mount Everest with his Sherpa and I was hoping for some kind of an adventure. I am a sucker for those adventure stories. Obviously, this wasn't it.

I received an eARC of this book via NetGalley in exchange for my honest review.

Check it out for yourself: Kindle | Paperback.

I was born in Portsmouth, New Hampshire in 1933...and attended the oldest primary school in  America...the Haven...just west of the Pilgrim's Strawberry Banke place. And I played baseball against  Puddle Dock, up the street (that's where the smaller olde boats could pull away from the Piscatequa River's powerful current and drop anchor in a protected pond).

But...my dad was a submariner in WW11...so I'll skip ahead to just before the Japanese bombed Pearl Harbor, and me and my brother and Mom were living in the Waikiki area. I went to a Japanese dentist and was given ether. The short story: I was slow in regaining consciousness. I heard one dentist say to the other: "I hope he doesn't come out of it! I hope he dies! I hate Americans!" When I came out...I loudly told my mother what I heard. She replied: "Oh, no! He wouldn't say that!"

One day my brother, age nine, a friend, age eight, and I were walking In the vicinity of Waikiki...and two Japanese came to us. One was about my age, the other perhaps fifteen. The older one stopped us and pointed to his young companion. "He'll beat you up! If you try to resist, I'll beat you up!" Then he pointed at me. "Start with him!" So...the kid stepped to me. He seemed very happy at the prospect of being able to freely hit us. I flattened his nose (if a kid seven years old can do that), and we scattered. The big kid never could catch any of us.

I went to a Brooklyn Dodger tryout camp when I was thirteen, and a scout took my name, and said he wanted to follow my progress through school. But that was the last I saw of him, because my dad was yet in the navy and it was time to move on.

I lived in Pawquanock (spelling?)Bridge, Conn. for a year when I was ten and Green Cove Springs,Florida, when I was fourteen.

I'll get to my point: probably also speaking for the reader, a person could write a book about every part of his life...if he wanted to go back and relive it.

You'd need to spend a few years on each book...to get it right. If I wrote about Hawaii, I'd need to mention that after I punched that little boy in the nose, and was running away, I heard him crying. I don't know when it entered my emotions to feel bad for the kid, but I did. He, too, was in the grip of the big boy...the leader. Anyway, I did what I had to do.

In nineteen sixty seven I moved to the Aleutian Islands, to Unalaska/Dutch Harbor, a fishing community...of three hundred souls. Now...in 2012...the usual population is about six thousand. Taught school, fished salmon, halibut, cod...worked for the Unalaska Corporation, and Tribe...was Parks manager ten years. One day my kayak was flipped by a fifty knot gust, and after drifting awhile, an air sac escaped from one end of the craft. As the end sank I would have bet heavily on my imminent demise. But...it gave me something pointed to hold on to. The other end had its air sac in place.

A lot to write about, but I won't go back that far. I hit the Japanese kid about seventy years ago...and I just about sank down into the dark of the Bering Sea about forty four years ago. It's done with...in the sense of not wanting to write about it.

During the Korean War I was in Germany...and we went into Berlin by air, because the Russians controlled land around it. But...I went there to play baseball, so don't be impressed by my military exploits during the few months I was transferred away from my outfit...in order to be an athlete and entertainer. (but I did meet Anneliese, in Berlin)...(and, in Frankurt, I met Doris)

I was educated at the University of New Hampshire and Columbia University.

Probably the reader will agree that a brief autobiograpy is not a waste of time, but it shows almost zero of what a person has done, or what he essentially is. Even if a person wrote ten books about different parts of his life, he wouldn't be known very much. Oh, sure...you'd get some of him or her. But, it's better just to get what he or she has to say in his work.

My hair is brown...and I don't breath hard when escaping a bank robbery (just kidding)...but I might be dead tomorrow. If you read my books before I'm gone, I'll be able to afford taking a bus to the book show...and maybe have a bowl of chili.

I won't write anymore...because when I look over my words, here, I feel I've said almost nothing that let's you know me.
Posted by Andi at 7:37 PM
Labels: mount everest, NetGalley, philosophy