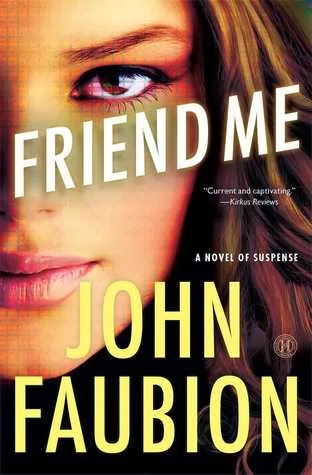 “You’re afraid you are becoming unfaithful, aren’t you?”

Scott and Rachel’s marriage is on the brink of disaster. Scott, a businessman with a high-pressure job, just wants Rachel to understand him and accept his flaws. Rachel is a lonely housewife, desperate for attention and friendship. So she decides to create a virtual friend online, unaware that Scott is doing the exact same thing. But neither realizes that there’s a much larger problem looming. . . .

Behind both of their online creations is Melissa, a woman who is brilliant— and totally insane. Masquerading as both friend and lover, Melissa programmed a search parameter into the Virtual Friend Me software to find her perfect man, but along the way she forgot to specify his marriage status. And Scott is her ideal match. Now Melissa is determined to have it all—Scott, his family, and Rachel’s life.

As Melissa grows bolder and her online manipulations transition into the real world, Scott and Rachel figure out they are being played. Now it’s a race against time as Scott and Rachel fight to save their marriage, and their lives, before it’s too late.

Join in the celebration on Saturday, March 15th from 3-6 pm EST!

We already have one contest going on!! Want to win a $25 Amazon card? Send your tweets to #FriendMeCelebration and you could be our winner! You must be a part of the event to be eligible, so don't forget to join!

Who is John Faubion?

John Faubion has spent many years in Asia as a missionary with his family. Since returning to the United States, John has worked as a senior software developer for a large appliance chain. He teaches an adult Sunday school class and enjoys writing and driving his 1949 Packard automobile. John lives near Indianapolis with his wife, Beth, and their daughter.