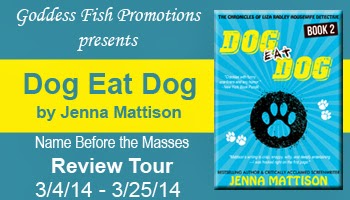 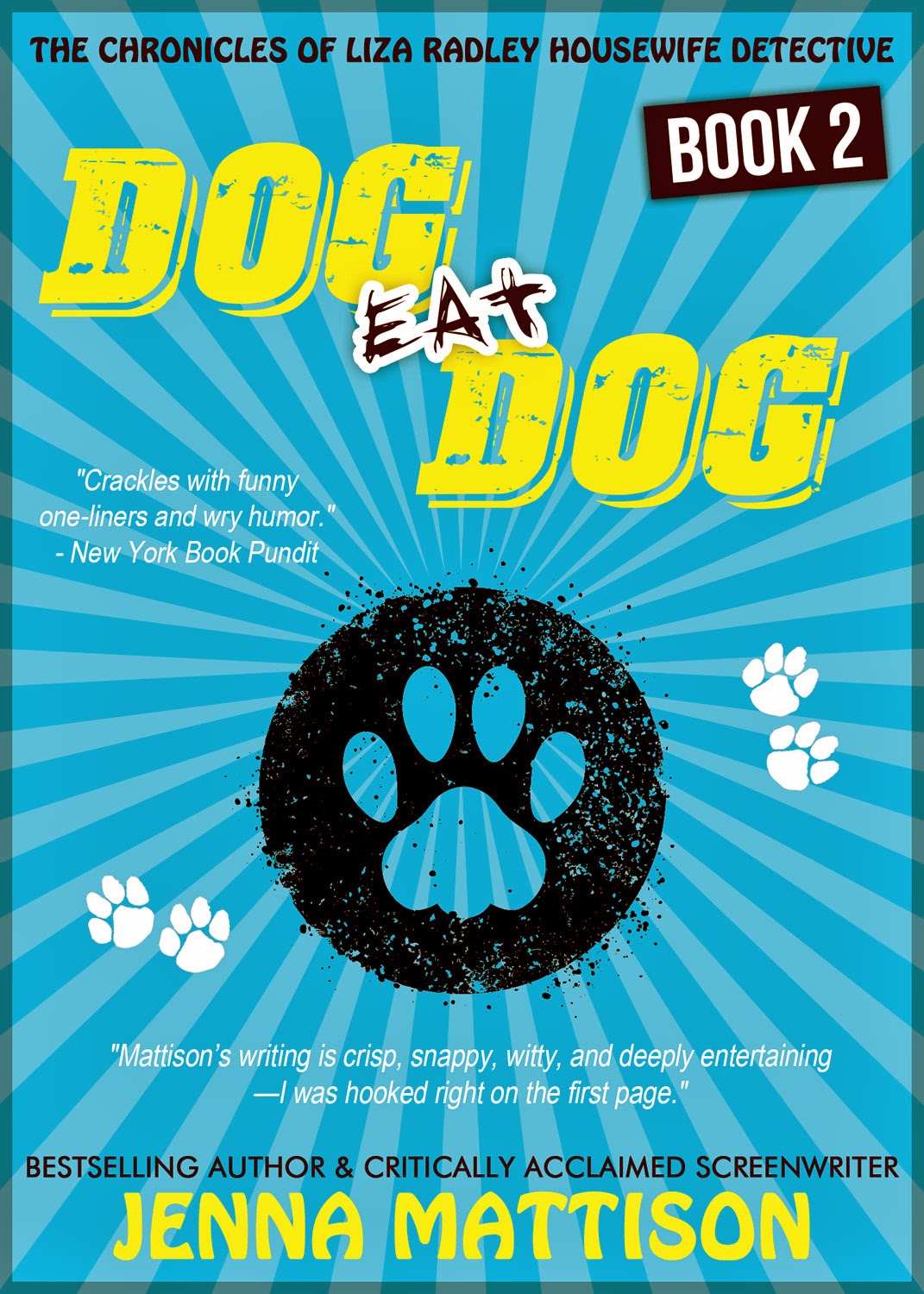 Book Two of the Eye Spy, Chronicles Of Liza Radley Housewife Detective, series brings back the antics of Liza & Jack in Dog Eat Dog. The two are knee deep in dognappers and heiresses at their newly opened Crimes Of The Heart Detective Agency. In between their investigations the will they or won't they drama of their complicated relationship is still front and center…and in the middle.

The line is long, as usual, and I grab a seat near the window as Jack orders our sandwiches. Mine sans bread. He saunters over waving a paper ticket stamped with the number 43. The red LED light behind the counter reads 34, so we’ve definitely got some time to kill. Luckily, I get a reply text from Buckmaster. Looks like the mansion belongs to an old boxing champion.

“The house belongs to an Xavier Martinez. Ring a bell? Wasn’t that the guy who bought a gold plated bathtub for his ex-wife? Maybe I’m getting him confused with someone else.”

Parella’s face lights up. “Different guy. Martinez was a middleweight. Took the prize in 2005 but kinda went nuts after that. Bit some guy's cheek off. Last I heard he lost all his money and was doped up on prescription drugs.”

“How’s he afford that mansion?”

“Not a clue. Maybe he’s got dirty fingers these days.”

I rack my brain for a clue. “Didn’t Lenny say Jameson was taken in the middle of the night but that he never heard any barking?”

“That means whoever was the dognapper either knew the dog well enough to not incite a bark or they were a professional.”

“Professional dognappers?” I snort and cock my brow.

“Okay, maybe it’s a stretch. I’d say Pinky’s still our prime suspect. If we get a hold of her credit card bills maybe we can figure out where she’s staying. We got lucky with the hairstylist tip from Lenny but I don’t think she’ll be going back there any time real soon.”

Liza Radley is still trying to figure out who she is, following her separation from her philandering husband. I say separation, because for whatever reason, she just can't bring herself to sign those divorce papers that are still in the bottom of her purse. She continues to eat her feelings, particularly drawn to Dunkin' Donuts and other tasty carbs. She is so consumed by food and diet that she often interrupts her narrative to mention it and to justify her decisions. She is also consumed by her partner in solving crime, Jack. He taunts her and she tortures herself by not giving in.

Liza has a knack for getting herself into weird situations both within and outside of the cases on which she and Jack are working. I started calling her Jessica Fletcher long before her friends did. She has some intuition that can serve her well. Sometimes, though, I think it is just pure luck.

This series is written in a first-person narrative that reads like a play-by-play in the present tense. This can work in some books. To me, it can be hard to handle at times, reading closer to a script than a novel. I can see Mattison's background as a screenwriter shining through this style of prose. It reminds me of reading a film noir. Other readers are going to better relate to the characters this way, or may prefer this style of writing.

Because of the present tense in first person, chapters tend to be short and choppy at times. In a way, this makes the book go by faster, especially if you are prone to reading in bursts. You feel like you're flying through because you can read three chapters in the time it normally takes to read one.

Is this my favorite book? No. Will I continue to read the series? Yes. I do like to find out what happens to characters!

Mattison started her career in Chicago appearing on television and radio. She founded Cheshire Smile Productions, bringing to life and penning her first feature film FISH WITHOUT A BICYCLE, a festival winning coming of age comedy, which was directed by Brian Austin Green. “Fish” is now available on Netflix and garnered a limited theatrical release.

Mattison also wrote Cheshire’s second release THE THIRD WISH now available at Blockbuster and distributed by the Hallmark Channel. Lionsgate’s FOR THELOVE OF MONEY, based on a true story of Jewish gangsters set in the 1970’s starring James Caan, Paul Sorvino, Edward Furlong and Jeffrey Tambor was also produced and written by Mattison and was released theatrically in the US & Israel. In 2012 The Academy Of Motion Pictures Arts & Sciences honored Mattison by displaying her screenplay of For The Love Of Money in the permanent collection of their library. Most recently Jenna wrote COMMITTED, a TV movie which wrapped production this spring to premiere on television under the title Deadly Revenge. In development is GHOST STATION which she will pen and co-produce with Michelle Weisler (The Ring, The Trouble With The Curve) to be shot in Canada summer 2014.

Her bestselling debut novel The Tree Of Jesse, a paranormal romantic thriller, was released this spring to critical acclaim and is available worldwide. Mattison’s most recent novel Eye Spy, the first in a comedic romantic suspense series, was released in July and hit bestseller status within the first week. Book two of the series, Dog Eat Dog, will be released this fall.

Jenna will be awarding a digital copy of Dog Eat Dog to a randomly drawn commenter at every stop during the tour. Follow the tour for more chances to win!
Posted by Andi at 7:18 AM
Labels: book promo, book review, comedy, excerpt, giveaway, Goddess Fish, mystery