Review of 'Before We Say Goodbye' by Julie MacLennan 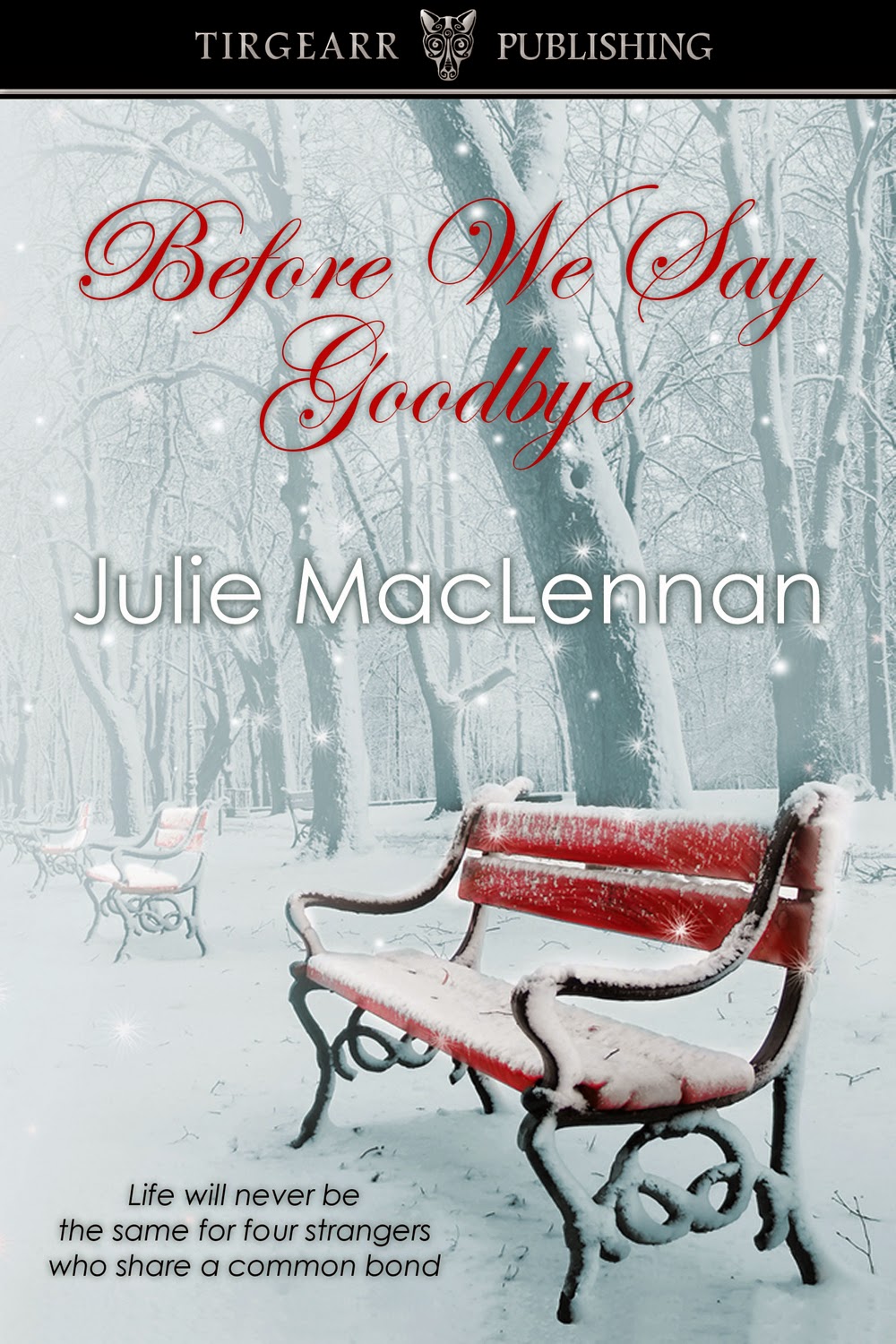 Before We Say Goodbye

Life is about to change forever for four strangers who share a train journey just before Christmas.

He waited for the click on the line and braced himself for what was to come.

Edward Blake, slurring his words viciously, didn’t even wait for Damien to finish the sentence before erupting into a tirade of fury.

‘Don’t take that fancy tone with me, you bastard! What the hell do you think you’re playing at? We had a deal.’

Damien’s tone was icily cool as he responded to the man who had been a business partner until the day before.

‘Yes, Ed, you’re correct. But you defaulted on our agreement’.

‘It was one payment. A short term cash flow problem. I can fix it. You know I can. I want my hotel back, do you hear me? You can’t do this. I won’t let you!’

‘I have no choice, Ed. We went through the terms of the agreement very thoroughly before we both signed up to it. I’m sure you haven’t forgotten.’

‘But you’ll leave me with nothing. I’ll be finished! You can’t do this to me…’

Damien tried to soften his tone a little, speaking more quietly now in an attempt to diffuse the situation.

‘Believe me, Ed, I take no pleasure in it, but a deal is a deal. And you were more than happy at the time. If I remember correctly, you treated yourself and your lovely wife to a round-the-world cruise to celebrate your good fortune. In fact, from what I hear, you’ve been celebrating quite a lot over the last few months. At my expense, it would seem.’

‘That’s not true. I’d never cheat you. I left it with my accountant to deal with while I was away. You know I had no choice. My family needed me. I couldn’t be in two places at once. It was an oversight, that’s all. I can put it right. I’m back now. I can sort it. I know I can.’

‘Maybe. But you took your eye off the ball long enough for your employees to let you down. You should have known better than to trust your life’s work to someone else.’

Edward Blake was rambling now and obviously very drunk. His breathing had become strained and erratic and Damien felt a twinge of sympathy for him. But he couldn’t back down. He had a business to run. And a reputation to uphold. If word got out that he was losing his touch…

This book took me a little bit to get into. There are so many characters being introduced in the first few chapters. Not only do you have everyone who is riding on the train, but also everyone who is trying to get in touch with these characters. The third-person point-of-view keeps shifting from character to character. You can tell they are all intertwined, but are not quite sure what exactly is the thread that is keeping them all together. About a quarter of the way through, I finally felt like I was clear on who was whom, and what a lot of their relationships were.

Each person is damaged. They are all suffering from a loss. What they don't realize is that their chance meetings are going to change their lives forever.

I spent some time trying to figure out which character was my favorite. I feel particularly drawn to Kate. She has been underappreciated all of these years, and is treated terribly by her stepdaughter. She is getting to the point where she is becoming somewhat forgetful as she struggles to make heads or tails out of her situation. She just wants to be loved and for people to be kind to her. I felt a motherly draw to her, and just wanted to sit next to her and give her a big hug.

I also really liked Alessandro's boys, particularly Luca. He is the charmer who sees the good in everyone and wants to always do right. I've taught children like him before and am always drawn to them.

This was a different kind of read for me, yet an interesting one. It will be interesting to see in which direction this newly published author will go in the future.

Julie MacLennan lives and works in Inverness in the Highlands of Scotland.

This is her first published novel although she has been writing for as long as she can remember.

Some of her earliest memories are of sitting by her grandfather’s chair and being fascinated by the books he read. Later, encouraged by her grandmother’s gift for writing and her mother’s imagination, she began to transfer her own short stories and poetry to paper.

Her shared love of football with her father inspired her to write the poem “Farewell, Our Friend” which was read out and televised around the world at George Best’s funeral in late 2005.

More recently, she was honored to be asked by the Royal British Legion if they could use another of her poems, “The Promise”, as part of their commemoration of the First World War.

She is now working on her second novel.

Julie will be awarding a $50 Amazon or B/N GC to a randomly drawn winner via rafflecopter during the tour. Follow the tour for more chances to win!