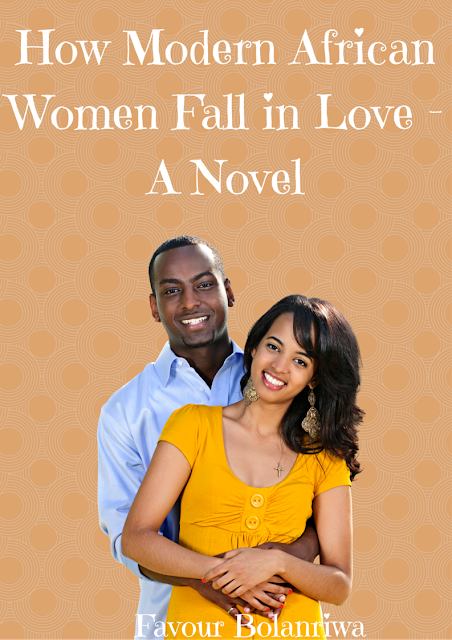 How do modern African women fall in love? Meet them....

It is London sometime in the 2000s. Five Nigerian young women — Lola, Funmi, Temmy, Maureen, and Titi — are caught up in the usual London hustle, doing the career thing and still finding time to look pretty at parties and bars. But their lives aren’t perfect, especially for Lola, who is nursing a broken heart and hanging on to a job as a financial analyst, that she doesn’t like. At a house party organized by one of the girls, she meets Wole. The attraction is instant, but in her classic African-girl approach to romance, she is hesitant, and worried about “losing all sense of caution.” But when unexpected tragedy strikes in the form of a murder, the force of desire heightened by the pain of loss drives Lola into Wole’s arms. Will Wole reward her need for comfort with love or will his dark past destroy their chance for happiness?

Available on Amazon
US / UK

We were still carrying on about the previous night when Titi knocked on the door to the bedroom and reminded us that she was having a party later in the day. If things were to go smoothly we had to get a move on. We stumbled out of bed, cleaned our teeth, washed our faces and trooped to the kitchen downstairs to have breakfast.
“I’m starving. Titi what have you got?” Maureen asked, opening cupboards.
“Let’s see, you can have toast, cornflakes or instant oats.” Titi said.
“I’ll have oats.” Maureen said. “I haven’t eaten a proper breakfast in a long time.”
“Why?” Funmi asked.
“Oh, because I sleep and wake up at all odd hours of the day.”
“You need to take better care of yourself.” Funmi said. “No wonder you’re so skinny.”
“Maureen can eat like a horse and still remain a stick.” Temmy said. “I’m so jealous.”
“Yeah, me too.” I said. “I have to work hard to maintain my figure.”
“Since you’re making oats, Maureen, make enough for all of us.” Titi said. “Let me get my list of things we need to do.”
“Miss Organised,” I teased.
“I have to be.” Titi replied. “Okay, here’s the menu. Who wants to do what?”
“I’ll make the jollof rice,” I offered.
“I’ll help with the chicken and beef,” Funmi said.
“Put me down for salad and fried plantain,” Temmy said.
“Great!” Titi said. “So that leaves Maureen to make the finger food. I’ve got some filo prawns, spring rolls and stuff like that.”
“Is that everything?” Funmi asked.
“Let’s see, I need to pick up my birthday cake, and get some disposable plates and cups from the supermarket.” Titi said.
“What about music? I can help you sort out a playlist,” I said.
“Thanks Lola.” Titi said. “I think that’s everything.”
She turned to leave the kitchen when I noticed something.
“Hey, Miss Organised, you’ve forgotten something. What about drinks?”
Titi turned around. “Oh drinks have been taken care of.”
“Where are they?” Maureen asked. “Let’s put them in the fridge now so that we won’t forget.”
“Oh, they are not here, somebody is bringing them in the afternoon.”
At that point we all looked up and turned to face her.
“Who?” The four of us asked at the same time.
“Somebody, a friend of mine is bringing the drinks...” Titi said blushing and lowering her face.
“Who is it?” I asked with feigned and exaggerated curiosity. “Does he or she have a name?”
Titi mumbled something under her breath.
“Say that again.” I said, cupping my hand over my ear in a mock attempt to hear her better.
“My friend, his name is Dayo.”
“Eh, who is Dayo?” Funmi asked.
“He’s this wonderful guy I just started seeing.” Titi said, the smile on her face, giving her away.
“Hmmm, na wa o Titi,” Funmi said. “When did you become so secretive?”
“I’m not! I only just started seeing him two months ago.”
“Ohhhh ... so is that why you cancelled on me the last time I asked you to come to the new bar with me? Temmy asked, pretending to be hurt.
Titi didn’t respond.
“See, she is guilty.” Maureen said.
“You guys let’s leave her alone for now.” I said “We’ll meet the guy today and deal with Titi later.”
“So you won’t even give us any information?” Funmi asked.
“Alright, alright.” Titi finally said. “I met him at a conference. I noticed him right away because he was the only black guy there. Throughout the conference our eyes kept meeting and afterwards, he came to say hello to me and we got talking. He took me out for a drink and we exchanged numbers.”
“What does he do?” Maureen asked.
“He’s a lawyer too, it was a legal conference.”
“That’s cool,” Funmi said. “So why the need for secrecy now?”
“Well, since you guys will see him today, I might as well tell you.” Titi paused. “He’s older than me.”
“How much older?” Temmy asked.
“He’s thirty-six.” Titi replied. “So he’s like eight years older than me.”
“Thirty-six! I couldn’t date a guy more than four years older than me.” Maureen said.
“I know.” Titi said, looking downcast. “That’s the only problem.”
“Actually, I don’t see why that is a problem.” Funmi said thoughtfully. “Eight years is not that bad.”
“I don’t see a problem either.” I added. “When you said much older I was already assuming like fifteen to twenty years older.”
We all laughed, and Titi said, “Lola! Fifteen years? He doesn’t even look that old.”
Maureen said, “Okay maybe it’s not so bad. At least he should be more mature than guys our age.”
“Tell me about it.” Funmi said, rolling her eyes. “I could do with a mature guy right now.” Funmi’s last relationship had ended sadly because her boyfriend’s mother did not approve of their relationship and he had refused to stand up and defend her.
“Exactly.” I said. My own ex-boyfriend Gbenga had given me no reason for our break-up before he packed up his things and left to travel the world. He had left me wondering what the hell I had done to deserve that kind of treatment.
“Yeah call him and tell him to bring his single friends along this evening.” Temmy said.
“Temmy! Are you serious?” Titi said and we all burst into laughter. Temmy was the only one among us in a relationship at the moment.

Favour Bolarinwa is a British-Nigerian writer of romance and contemporary fiction stories. She draws her inspiration from complex relationships.
Posted by Andi at 4:59 AM