Notes and Roses by RJ Scott writing as Rozenn Scott 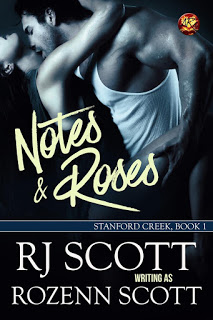 
It’s time to stop running and take a stand…for love.

Former boy-band singer CJ Taylor is starting a new life. His stalker is behind bars, he’s taken back his birth name, and he’s bought a house in a small Vermont town. As Cody Brennan, he finally feels safe and wants to write new music and forget about his tragic past, but an accident nearly ruins everything.

Florist Megan Campbell is horrified when a stranger, covered in blood, collapses in her shop. Cody’s erratic behavior startles her at first, but as he recovers she becomes very attracted to him. Her family thinks she should curb her feelings, and worries about her safety—she worries about her heart.

From her amber eyes to her tempting smile, Megan is everything Cody promised himself to avoid. The more he gets to know her, the more he wants to stay. When his past begins to catch up to him in the form of violent threats, will they stay safe long enough to fall in love?

RJ Scott is the bestselling author of over ninety romance novels and novellas. From cowboys to millionaires, SEALS to cops, her stories are passionate, sexy, and always come with a guaranteed happy ever after. RJ also writes as Rozenn Scott for her new line of strong men and women who find that it’s always worth overcoming obstacles to find a forever love.

RJ lives just outside of London, and has never met a bottle of wine she can’t defeat.

For more information on other books by RJ/Rozenn, visit her website: www.RJScott.co.uk

3 Copies of an ARe A Shades of Naughty ebook
a Rafflecopter giveaway
Posted by Andi at 3:00 AM
Labels: Bewitching Book Tours, book promo, contemporary romance, giveaway