Review of A Fairytale Bride by Hope Ramsay with Giveaway 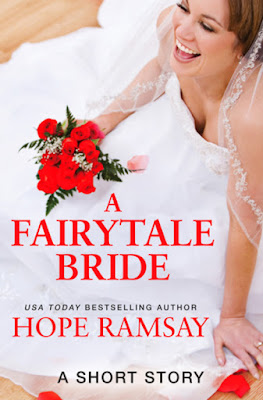 A CHAPEL OF LOVE SHORT STORY

After a very public career disaster, journalist Jeff Talbert-Lyndon wants to escape from the world. Picturesque Shenadoah Falls, Virginia, seems like the perfect place to relax and regroup before heading back to real life. But when he discovers the charming bookstore Secondhand Prose - and its lovely, slightly overwhelmed owner- he finds a part-time job and a very tempting reason to stay...

Melissa Portman is fighting a losing battle when it comes to saving her grandmother's store - and selling the historic building may be her only option. Yet when a handsome stranger wanders in one day, she wonders if her very own fairytale is just beginning...


Melissa Portman almost laughed in the man’s face. He was most definitely not the teenager Grammy had been searching for when she’d put the “Help Wanted” sign in the window three months ago.
He was a grown man, probably her age or a little older, in his late twenties or early thirties. He wore clothes that branded him as someone who came from way, way out of town: a brown tweed jacket with elbow patches, a striped button-down shirt, and a pair of skinny jeans that showed off his muscular thighs. All in all, he gave the impression of a hot college professor.

He also had dark, soulful brown eyes, too-long black hair that curled over his forehead like a sensitive poet’s, and a well-groomed scruff of beard that Melissa found way too attractive for her own good. To top it all off, he held Hugo in his arms like a man who knew something about cats. In fact, just watching his long fingers stroke the cat was vaguely erotic.
No question about it. He was delicious eye-candy. And she wasn’t stupid enough to believe that he needed a job. The guy was flirting.
Wow, that hadn’t happened in, like, forever.
She arched her eyebrow the way Grammy used to when faced with the utterly absurd and said, “You want to work here? Really?” She invested her voice with just the right tone of skepticism.
His mouth quirked and exposed adorable laugh lines that peeked through his GQ-style stubble. “Really,” he said. “I appreciate literature.”
His voice was low, deep, and had just the right hint of tease in it — like he might be calling her out for the book she’d hidden beneath the counter. Had he seen the title? She hoped not.
“Seriously,” he said, “I’m interested in the job.”
“It’s minimum wage,” she said.
“How much is that? I’m new around here.”
No kidding. “$7.25 an hour.” She managed to say this with a straight face.
The professor’s eyebrows lowered. “That’s not very much, is it?”
Obviously Mr. Professor had been spending all his time in ivory towers or something. “Right,” she said, nodding. “And that’s why we only hire high school students. You’re a little old for that.”
He continued to stroke Hugo as he gazed at her out of those impossibly hot brown eyes. “I know, but I need the work. I recently lost my job.”
Something in the set of his broad shoulders suggested that he was telling the truth, even if he was also flirting at the same time. A momentary pang of sympathy swelled inside Melissa. She was in the same boat. She’d given up a good job with the Fairfax County Public Schools in order to take care of Grammy, and now she’d be out of a full-time teaching job until next September. She didn’t know how she’d pay her bills.
Unless she sold the historic building that housed Secondhand Prose. The Lyndons were willing to pay a fortune for it—enough to pay all of Melissa’s bills, cover the property taxes, and give her something left over to invest. But selling out to the Lyndons was the last thing Melissa wanted to do. In her heart of hearts, she wanted to keep Secondhand Prose’s doors open. But that was just silly, wishful thinking.
“I could be very helpful,” Mr. Professor said, breaking through Melissa’s financial worries. “I’m good at organizing things, and I have other experience and qualifications that could be valuable to you.”
She eyed the cat and then his handsome face. “Aside from charming killer cats?”
His mouth twitched again. “I’m an avid reader.”
She rolled her eyes. “Aren’t we all? But really, there is no job.”
“But the sign. And you’re clearly short—”
“The sign has been there for a while. My grandmother put it up before she died. I’m sorry, but there’s no job available here.”
“Oh. I’m so sorry about your grandmother.”
For an uncomfortable moment, their gazes caught, and the kindness and concern in his eyes surprised her. “Grammy was pretty old,” Melissa said, her voice barely hiding the sorrow that had hollowed out her insides. “So let me ring these books up for you, okay?”
Melissa picked up the books he’d laid on the counter while Mr. Hottie Professor continued to lean his hip into the counter, his mere presence disturbing the atmosphere and making Melissa adolescently self-conscious.
“That’ll be $25.00 for the books,” she said in her best customer-service voice. She expected him to hand over a credit card, but instead the guy pulled out a money clip that held a big wad of bills. He sure wasn’t a professor, not carrying cash like that. He had to thumb through several hundred-dollar bills to find a five and a twenty. So who was he? She was suddenly dying to know.
He put Hugo down, but the damn cat continued to circle his legs. “Nice cat,” he said.
“His name is Hugo — well, his full name is Victor Hugo — and he’s not friendly.”
“Could have fooled me.”
The cat meowed as if he knew they were talking about him. What was Hugo up to? He never made friends with strangers.
She handed the guy his bag. “So, where are you staying?” she asked, hoping she might prolong this conversation and get his name, email address, or even his profile on Match.com.
He took his bag and broke eye-contact. “I love your store. Next time I’m going to make friends with the cat in the window.”
“Ha, I don’t think so. Dickens is half-wild.”
“I already figured that out. Have a nice day.”
And with that, the guy turned and strolled down the aisle toward the door, looking amazingly like the hero in the romance novel she’d been reading when he’d first arrived.

Do you have an hour? Curl up with your Kindle and this book for a whirlwind romance that will capture your heart and leave you a little warm and fuzzy inside. Melissa reminds me a bit of myself. She just wants to read her books and save her secondhand shop in memory of her grandmother. She also has two obnoxious cats who pretty much don't want anything to do with anyone else. She also knows how to appreciate a fine male specimen.

Jeff is also quite likable, despite his family history. You've gotta love a writer who holds true to his beliefs, even in the face of adversity. I also love a man who loves to read and gets along well with cats.

The two of them have immediate chemistry, and it's no surprise why. Their attraction goes deeper than just a physical one. To connect with someone like that on such an intellectual level is a really big deal for some of us.

You get a hint of recognizable conflict because Jeff is hiding his true identity from Melissa. He's a part of the family that she hates that is trying to end her stint at the bookstore. It doesn't matter that he also hates them; he's still a part of it. It's a storyline that has been used over and over again, but if well-executed, you won't mind.

My only complaint with this story is that it seemed too short. I know it is billed as a short story. It just felt like the relationship between the two, the conflict, and the resolution, happened way too fast. I also just felt like there was so much more to their story. I was pleased to find a preview of the next book at the end of this, and know that I will be seeing these two again.

I give it 3.5 stars, because it definitely kept me delightfully engrossed for an hour, making for a fun break from reality on a warm spring day. I just want a bit more out of it. 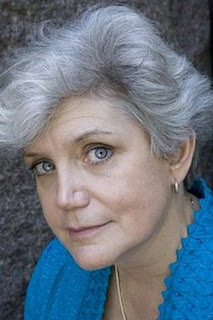 Hope Ramsay is a USA Today bestselling author of heartwarming contemporary romances. Her books have won critical acclaim and publishing awards. She is married to a good ol' Georgia boy who resembles every single one of her Southern heroes. She has two grown children and a couple of demanding lap cats. She lives in Virginia where, when she's not writing, she's knitting or playing her forty-year-old Martin guitar.