If you're in the mood for a sweet historical romance, this one is for you! Enjoy an excerpt from Sara R. Turnquist's A Convenient Escape. Follow the tour for even more and let her know what you think along the way! Best of luck in the giveaway! 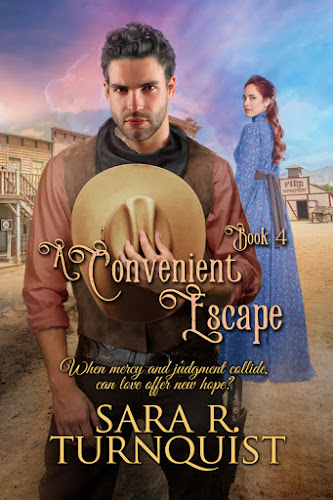 She has nowhere to go. He has nothing to lose.

Lily McAllen has known nothing but hardship and rejection. Her brother, the only person she can lean on, takes a job at the Miller ranch. Now with no ally, she is alone, confined, and vulnerable. She becomes desperate to get away…by any means necessary.

Despite his best intentions, Daniel Hayworth is drawn into a fatal mishap. He feels responsible. And is prepared to do whatever it takes to ensure Lily is cared for…even if that means proposing marriage.

Complicating matters, Geronimo and his raiding band terrorize the surrounding areas. Troubles mount and tensions challenge the growing attraction between Dan and Lily.

Will they make it to the church? Or find themselves victims of lies, disillusionment, or the ire of an Apache rebel?
Read an excerpt:

She prayed he would not pull back. Why would she do so? Why did she wish him to be near? Why did that seem important?

As if answering her prayer, he leaned closer. “That’s just not possible.”

She clenched her hands. “Why not?” The words did not have much force behind them.

“Just…trust me.” His words were clipped.

The manner of his tone sliced through her, stinging as it cut. Her fight against her tears became futile. And one escape.

Why would he be so insistent? Was there something he didn’t trust her with?

Dan covered her hands with his larger ones. “Lily, I…”

What did he care to say? Would he speak things that would endear him to her? She should not listen, yet she waited.

This time it was she who sought his regard while he looked downward.

He continued, “I can’t do that if you won’t trust me.”

In the silence of the moments that followed, she considered his words. And she knew he had been right—there must be some give and take. And he wasn’t asking for much. Only hurt had kept her from seeing it.

She didn’t have ground to stand on anyway. The truth was she had nothing. No one. And nowhere to go. He had been and was being generous. This offer was a gift.

Nodding, she slid a thumb over one of his fingers.

He peered up at her, meeting her gaze at last.

The velvety brown she found there was so soft and deep that the world melted away. Her heartbeat slowed.

Perhaps her trust wasn’t for nothing.

Sara is a coffee lovin', word slinging, Historical Romance author whose super power is converting caffeine into novels. She loves those odd little tidbits of history that are stranger than fiction. That's what inspires her. Well, that and a good love story.

But of all the love stories she knows, hers is her favorite. She lives happily with her own Prince Charming and their gaggle of minions. Three to be exact. They sure know how to distract a writer! But, alas, the stories must be written, even if it must happen in the wee hours of the morning.

Sara is an avid reader and enjoys reading and writing clean Historical Romance when she’s not traveling. Her books range from the Czech lands to the American wild west and from ancient Egypt to the early 1900s. Some of her titles include The Lady Bornekova, Hope in Cripple Creek, The General’s Wife, Trail of Fears, and the Convenient Risk Series.

YouTube: Sara Turnquist  https://bit.ly/sara-youtube
Sara R. Turnquist will be awarding a $30 Amazon or B/N GC to a randomly drawn winner via rafflecopter during the tour.
a Rafflecopter giveaway
Posted by Andi at 12:13 AM
Labels: giveaway