Madam in Silk by Gini Grossenbacher

This one is for fans of historical fiction and is based on a true story! Check out an excerpt before you download yours. Follow the tour for more! Best of luck entering the giveaway. 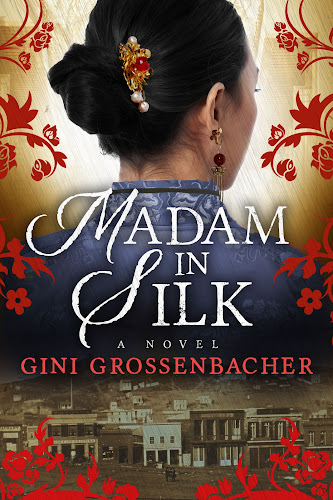 San Francisco,1849. Despite her objections, twenty-year-old Ah Toy and her servant Chen voyage from China to San Francisco with her husband who dies on board ship. With little cash and bound feet, how is she to find employment in the Gold Rush town? Since she is the only Chinese woman there, she opens a "Lookee Shop," catering to miners who pay in gold dust to see her exotic beauty. As her notoriety grows, so does her attraction to the devoted policeman, John Clark. Yet should she put her faith in one man? Will their love survive despite her frightening encounter with Sydney Ducks, threats from rival madam Li Fan, and a tempting offer from Henry Conrad who promises her wealth and security? Armed with her mystical beliefs of the inner dragon and Goddess Mazu, Ah Toy faces much more than the journey from the ancient ways in China to the new world in America. In fact, she must find the true source of courage in a life or death struggle for her own fate, justice, and dignity. Based on page-turning accounts about the life of Ah Toy, one of San Francisco's most legendary madams.
Read an excerpt:

Clark fondled his hat brim. “Tell me which shop, and I shall go find her.”

Chen clenched his teeth. “I think that is not a good idea,” he said.

Clark frowned. “Forever why not?”

Clark’s face reddened. “Chen, are you hiding something? Out with it, my man. Why would it not be a good idea?” He looked up at the ceiling, then let out a heavy sigh. . . .

Ah peered through the crack in the door. Chen was probably wondering if he should tell Clark the truth—or not. She watched him gaze at Clark whose lips pressed flat.

Then Chen broke Ah Toy’s rules for servants—again. . . . “I will face great trouble from my mistress for telling you this. You can never tell her how you learned this information.”

Clark leaned forward, sliding his chair closer. “Of course, Chen, your secret is safe with me.”

“She is to be married. She is out shopping for a wedding garment.”

Clark blinked rapidly. Was he trying not to show his surprise?

She held her breath for a moment. A debate raged inside of her: if she went to Clark, here and now, as she was sorely tempted, her risk was great. After his wife’s loss, Clark had already drifted away from her to New York. How could such a man be trusted?

Clark stiffened; his knuckles white around the rim of his hat. “She is going to wed?”

MADAM IN SILK is California teacher and editor Gini Grossenbacher’s second historical fiction novel. Her debut novel MADAM OF MY HEART garnered the 2018 IPPY silver medal for Historical Fiction; finalist in the 2018 American Fiction Awards for Historical Fiction; honorable mention at the 2018 San Francisco Book Festival for General Fiction; and runner-up in the 2017 Hollywood Book Festival for Genre Fiction. She is also a copyeditor and leads an aspiring writers group called Elk Grove Writers and Artists, providing lessons in novel writing, memoir, poetry, and flash fiction. When she’s not writing, Gini can be found taking long walks, tending the roses in her garden, and barbecuing with her husband and beloved dog, Murphy Brown.
Gini Grossenbacher will be awarding a $10 Amazon or Barnes and Noble GC to a randomly drawn winner via rafflecopter during the tour.
a Rafflecopter giveaway
Posted by Andi at 12:40 AM