If you like to read a variety of short stories, then this is a book for you! Enjoy an excerpt from one of Ann Chiappetta's stories in A String of Stories From the Heart of the Future. Be sure to follow the tour for even more and let her know what you think! Best of luck entering the giveaway! 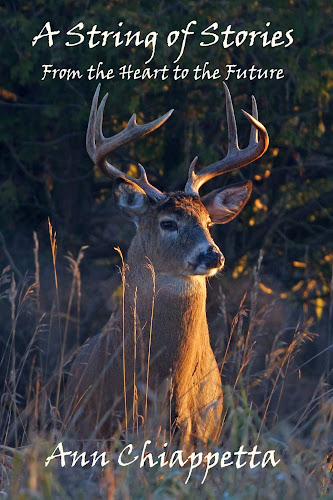 A demon deer and a ghost cat. Sibling rivalry and sexual awakening. Self-image and self-confidence. The chance for an offworlder to breathe free at last on a new planet. Those are just some of the diverse themes of these remarkable stories. Some endings are happy, some are sad, and some are intriguingly open-ended. But once you step inside the author’s world, you cannot emerge unmoved.
Read an excerpt:

Excerpt from "From Lafayette 10"

Finally, Avril heard the hum of the rover. She popped in her eye shields, tightened the band on her ponytail, and put on the sunhat. When the security camera identified the rover as Ralen’s, she grabbed her bag and left to meet him.

The small, light touring craft was outfitted for eight, plus the flight crew. Ralen invited Avril to sit up front with him, since the other passengers in the group knew one another. “You’ll be bored back there by yourself. Besides, I could use the help.”

Avril frowned. “I don’t know anything about aircraft.”

“You can always climb back over if you change your mind.” He turned to welcome the other passengers, greeting them and telling them where to sit.

The aerial tour took them on an east–west parallel and highlighted the colonies. Many of the settlers chose the now defunct volcanic craters to house them, as the rim rock was a natural barrier from the heat and sandstorms. Lafayette 10 was recovering from mineral pirating millennia before. Advanced techniques in modern terraforming and mining restoration proved that planets like this one could eventually be nursed back from the brink.

Ralen turned to face her. “We’re in a holding pattern until I get clearance to land.”

Avril looked out the window. “Is that where we’re going on the lava boat?”

“Yes. We’ll be cleared to land in a few minutes. The port will bring us in by tractor beam.”

Avril watched the air commerce. “This is ten times busier than Strata,” she said as another small craft crossed the airspace beneath them.

“Lava City is a tourist’s dream if you like that sort of thing,” he said.

The craft began its descent. Ralen touched her knee. “Here we go. Welcome to Lava City.”

Dozens of humanoid species milled around in the spaceport’s terminal.

Avril thought she saw a few Hepsonites but couldn’t be sure because of the moisture suits. One was male and the other female, apparent by the size and shape of the bodies. Avril had thought she was the only Hepsonite here, and she felt a twinge of fear in her belly. The only one who didn’t hate her for being so different was her mother.

She started, turning to find Ralen looking at her, an unreadable expression on his face.

Ralen nodded, watching the couple move past. Avril couldn’t help noticing that he was more than a little interested in them.

“Time for the tour,” he said, breaking off his observation and gesturing to the tunnel leading to the boarding area.

The craft was narrow and cramped. The group had to climb a ladder to access the passenger fuselage and cockpit area. Ralen loaded them back to front. He offered a hand–up to Avril, who gratefully took it.

She climbed the ladder, stumbling into him, her shoe catching the last step. Panicking, she flung out her arm and grabbed his utility belt. Their bodies bumped into one another, and Ralen put an arm around her waist to keep her from rebounding.

“Sorry,” she muttered, her face flaming with embarrassment.

“Are you okay?” he asked, steadying her.

She nodded, too embarrassed to look up.

He put a finger under her chin and tilted her face so their eyes could meet.

Avril searched his face for the glint of cruelty she was an expert at detecting but found only her own reflection in the eye shields. 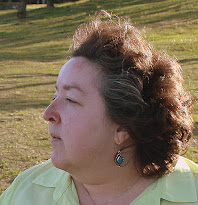 Making meaningful connections with others through writing.

Ann’s nonfiction essays have been printed in Dialogue magazine, among others. Her poems are often featured in Poesis, The Pangolin Review, the Avocet, and Magnets and Ladders. Her poetry is also included in Breath and Shadow’s 2016 debut anthology, Dozen: The Best of Breath and Shadow.

Her first two books, a poetry collection, UPWELLING: POEMS C 2016 and memoir, FOLLOW YOUR DOG A STORY OF LOVE AND TRUST C 2017, are available from all eBook sellers in electronic and print softcover, and as audio books from Audible.

Ann’s third book WORDS OF LIFE: POEMS AND ESSAYS C 2019 can also be purchased in all eBook formats and in softcover. The Audible audio book will be released in Fall 2020. Ann’s newest title, A String of Stories: From the Heart to the Future C 2020, is also available as an eBook and softcover.

Ann Chiappetta will be awarding a $15 Amazon or B/N GC to a randomly drawn winner via rafflecopter during the tour.
a Rafflecopter giveaway
Posted by Andi at 3:30 AM
Labels: book promo