Crafting the fictional world of Bennytown by Matt Carter

Crafting a fictional world is a lot of hard work but pays off in the end. And when you're dealing with a horror story, there's a lot that is at play! Today, author Matt Carter takes us behind the scenes of how he put together Bennytown, in his book of the same name. You can also read an excerpt and then follow the tour for more. Be sure to let Matt know what you think! And then be sure to enter the giveaway at the end.
************************
Hands down, one of my favorite parts of writing is world-building, as a good fictional world is almost a character unto itself when it is done well. Part of this comes with a fascination I had growing up of layered, fantastical worlds in the media I absorbed as a kid, while the rest comes from my study of history in college. One of the things that always fascinated me about history is that very little in it is completely random; almost every event, every concept, every invention or plan is the culmination of events leading up to it, like dominoes tipping into each other one at a time, where it helps to know every step that happened to know how something came to be. This has informed my writing and my low-level obsession with fictional world-building greatly, and proven quite fun to create worlds I would (or wouldn’t) want to live in.

Crafting the world of Bennytown definitely falls into the realm of crafting a world I would very, very much not like to visit, but one that fascinates all the same.

In the story, Bennytown is a major American theme park with a dark history full of madness, monsters, ghosts and all sorts of things that go bump in the night. When I began sketching out the earliest ideas I had for this story, that was pretty much all I had in mind: that I wanted to set it in a major theme park, and that I had a checklist of creepy things and images that I wanted to find a way of fitting into the story.

Crafting the theme park part was easy enough, considering I live in the Los Angeles area and have a lot of the biggest parks in America a short drive away, with plenty of memories both positive and negative from visiting them. Combined with the two years I spent serving ice cream at Universal Studios back in high school, and I had a good basis to start off of. From there, I spent time researching bad things that had happened at various famous parks over the years, using them for inspiration for some of the darkness within the park.

From there, it was a matter of designing and mapping out the park, figuring out what would go where and how it would best fit the outline of a story I was building, and once I had that in place, it was all a matter of figuring out how the various dark forces within Bennytown would make sense. I couldn’t just have ghosts or monsters or other eldritch entities exist within the story simply because I wanted it to be weird and scary, they all had to make sense and have a particular logic of their own.

And that was around the point where I had to start not just building Bennytown now, but Bennytown throughout its entire history. I had to know when it opened, who the personalities behind its construction were, why it was what it was. I had to fill out a timeline stretching across six decades of time knowing exactly what happened at the park in various times that would explain the various macabre denizens of the park. Not all of that history would come up over the course of the book, but in case that information was needed, I would have it ready to be used in the stories.

It is an at times difficult process, crafting fictional worlds that truly feel both alive and lived-in, but one I’ve always found rewarding. A fictional world that looks brand new and shiny is one that will stick out as distinctly artificial, but craft one that’s got a feeling of history and character to it, and the readers will be brought more into whatever fantasy you wish, be it fun and lighthearted or dark and sinister.
When readers visit Bennytown, I want it to feel like a place they can swear they’ve visited, one that is capable of giving them the familiar vibe of a comfortable, family friendly environment before plunging them into the depths of terror. Do I succeed? Well, there’s only one way to find out… 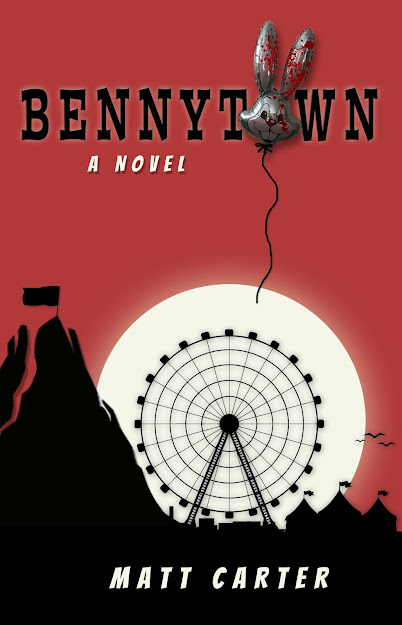 For nearly sixty years, Bennytown has been America’s most exciting family theme park destination. Under the watchful eye of cultural icon Benny the Bunny, the park has entertained generations of children with its friendly atmosphere and technologically innovative rides, acting as a beacon of joy and wonder, where magic is real and dreams come true.

Bennytown once saved sixteen-year-old Noel Hallstrom’s life, and to repay it, Noel has applied for a summer job. Though the work is messy and the hours are bad, Noel is happy to be a part of the Bennytown family, until he sees the darkness beneath the surface. Strange, mechanized mascots walk the park perimeter. Elegantly dressed cultists in wooden Benny masks lurk in the darkness. Spirits of the many who’ve died in the park roam freely, and every night the park transforms into a dark dimension where madness reigns and monsters prowl.

Noel is about to find out more about Bennytown than he ever wanted to know, and that its darkness might have designs on him.
Read an excerpt:

The third escalator is the longest, looking like a black cut has opened in the earth before me. Carefully and quickly, I bound down the steps.

Halfway down, Benny starts laughing over the speakers with a mechanical, staticky roar. His voice mingles with what sounds like a man whistling. The steps shake beneath me as the escalator jolts downward, twisting me off balance. The dolly flies from my hands, tumbling end over end down the moving steps. My arms reach out wildly for purchase, and I grab one of the rubber handrails, slowing my fall, but not stopping it.

I land on my back, upside down with the wind knocked out of me. I try to ignore the stabbing pain from the steps while Benny interviews Flora Fox about her upcoming movie over the loudspeakers.

The voices are shrill and the pain rings in my ears so loudly that I don’t realize there’s a humming sound coming from the bottom of the escalator.

The dolly lies at the edge of the disappearing final steps, tumbled and with a gouge in one of its wheels and a yellow sticker I’ve never noticed on the bottom of its scoop. In front of the dolly, I’m staring straight at the escalator’s base with welcoming spikes ready to swallow my hat, my scalp, and my face. I can picture the flesh being peeled from my bones. I try to claw my way out of my sprawl, but my hands are slick from sweat and rain. My fingers can’t find anything to grip on the polished escalator sides. The motor is getting louder while the grinding vibrates the steps beneath me.

Wordlessly, I cry out, attempting to twist and fight my way free. 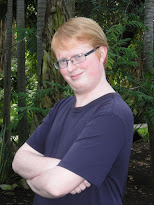 Matt Carter has used his lifelong love for writing, history and the bizarre to bring to life novels like Almost Infamous: A Supervillain Novel, Pinnacle City: A Superhero Noir, and the Prospero Chronicles young adult horror series (all co-authored with Fiona J.R. Titchenell). Bennytown,is his first solo horror novel.

He is represented by Fran Black of Literary Counsel and lives in the usually sunny town of San Gabriel, CA with his wife, their pet king snake Mica, and the myriad of strange fictional characters and worlds that live in his head.

Matt Carter will be awarding a $15 Amazon/BN GC to a randomly drawn winner via rafflecopter during the tour.
a Rafflecopter giveaway
Posted by Andi at 3:30 AM
Labels: horror