A sci-fi adventure involving dream immersion awaits you in Dream Phaze - Germination by Matt Watters. Take a look at an excerpt and then download your own copy. Follow the tour for even more! And then be sure to enter the giveaway at the end. 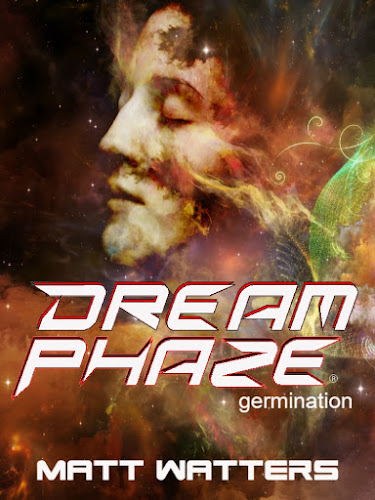 All Saxon Zynn wanted to do was dream, not for himself, but for everyone. Back in 2037, Saxon stated, ‘Dreaming is a reality to be experienced.' A decade of research later and his Dream Immersion technology is poised to become the major entertainment medium of the 21st century, but will unforeseen obstacles prevent him from achieving his purpose?

Dream Phaze is about the inception of engineered dreams and the evolution of indulgence. Set at the crossroads of alternative realities in the near future, it plunges into a world where every human desire, no matter how heroic or evil, can be fulfilled… dreaming just became an adventure.
Read an excerpt:

Twilight was ending as night beat day and engulfed the barren landscape. They gingerly entered the water.

‘Sulphur. Under no circumstances should we dive, splash, or put our faces into the water,’ Saxon instructed. ‘Unusual tactile sensation; it’s sort of thick and soupy. What’s your pain threshold on?’

‘Me too,’ Wendy confirmed. ‘I shouldn’t have shaved my legs this morning.’

‘Don’t go in too far, you might have trouble putting your feet back down on the bottom.’

The three of them lolled in the dense Dead Sea water, looking up at the burgeoning night sky. Small foam bean pillows supported their heads.

‘So, besides the floating sensation, stinging cuts, and the danger of swallowing this muck, what are we doing here, Saxon?’

‘Relax, Kris, enjoy the experience for a moment, we have time. Notice there are very few sounds here.’ Saxon heard someone entering the water behind him, but didn’t look back.

He instantly recognised her voice. ‘Evening, Lena,’ he smiled.

‘Lovely night for a dip.’ Lena waded into the water beside Saxon and reclined.

‘Look up there,’ Kris pointed at a faint glow in the eastern quadrant of the night sky. ‘Meteoroid?’ The radiance grew in intensity, then an abrupt flash exploded into flares rippling out like fireworks.

‘Wow, it’s beautiful,’ Lena whispered, as the sound wave touched them with a faint crack.

‘About 13,000 years ago, just north of this region,’ Saxon explained, ‘early nomadic tribes, hunter gatherers, began staying put in the one place. They collected plants, animal meat and skins, and settled down around their larder to became hunter collectors.’

The others bobbed, mesmerised by the light show above as they listened to Saxon’s lecture-style storytelling.

‘At that time, a sizable meteoroid entered the atmosphere and exploded into a massive meteorite storm covering almost a third of the planet.’

‘So, we’re going to have meteorites rain down on us?’ Wendy asked.

‘One theory goes, this event changed the planet forever,’ Saxon continued. ‘It helped initiate a 1300-year cold period that wiped out the megafauna across North America. Tonight, we will be re-testing the–’

‘I don’t know, Saxon,’ Wendy said concerned. ‘Being hit by a meteorite is not my idea of entertainment.’

Buy Dream Phaze – Germination here: https://books2read.com/dreamphaze1
About the author:
Matt lives in Sydney, Australia and works as a course developer and writer in the Community Services sector.

'This narrative began as a short story in 2014. Over subsequent years it evolved through several plot, character and title iterations until Dream Phaze emerged as an episodic series published online in 2018. These episodes, collectively known as Germination, are now an ebook.

Dream Phaze - Imagination, the second ebook in the series, will be released in September 2020.

Matt is a member of the Australian Society of Authors and Alliance of Independent Authors.

Goodeads: https://www.goodreads.com/author/show/19559598.Matt_Watters
Matt Watters will be awarding a $20 Amazon or B/N GC to a randomly drawn winner via rafflecopter during the tour.
a Rafflecopter giveaway
Posted by Andi at 3:30 AM
Labels: science fiction