Interesting Facts From The Umpire Was Blind! by Jonathan Weeks

Reffing calls have been problematic for a long time. In the sports world recently, we've heard an awful lot about the problems in football. But baseball has also had its fair share. Today, author Jonathan Weeks is sharing some interesting facts from his new book The Umpire Was Blind! Plus you can read a more detailed excerpt before you download your own copy. Be sure to let him know what you think as you follow the tour. Best of luck entering the giveaway!
****************************
INTERESTING FACTS FROM THE UMPIRE WAS BLIND!
--Major League Baseball waited until 2008 to allow video review of questionable home runs. The first official challenge was issued by Tampa Bay manager Joe Maddon on a disputed homer by Yankee slugger Alex Rodriguez. Maddon’s challenge was overturned.

--In 2014, managers became entitled to one official challenge per game with a new one being granted for every dispute upheld. In addition to home runs, fair-foul rulings and fan interference calls can now be reviewed (among other scenarios). Ball and strike calls remain exempt from challenges, however, resulting in a myriad of costly mistakes by umpires.

--Outside chest protectors were first used by umpires in the 1880s. Known as “balloons” or “mattresses,” these obstructive pieces of equipment forced officials to look directly over the catcher’s head, resulting in more high strikes being called. The AL continued to use “balloons” into the 1970s, when they were finally prohibited.

--Joe DiMaggio’s famous 56-game hitting streak in 1941 was kept alive by an errant call at first base made by umpire Steve Basil. Had Basil gotten the call right, DiMaggio’s streak would have stalled out at twenty-four games.

--Don Drysdale’s record of 58.2 consecutive scoreless innings pitched was made possible by umpire Harry Wendelstedt, who ruled that Dick Dietz of the Giants made no attempt to avoid getting hit by a Drysdale pitch with the bases loaded. Instead of awarding Dietz first base, he called the pitch a ball, giving Drysdale the opportunity to work out of trouble and extend the streak.

--In breaking Don Drysdale’s scoreless streak, Dodger hurler Orel Hershiser received help from umpire Paul Runge, who ruled that base runner Brett Butler had interfered with a double play relay from shortstop Alfredo Griffin. Butler was called out on the play and the run that scored was subsequently erased.

--In 1911, AL president Ban Johnson prohibited warm-up pitches in the interest of shortening games. When Red Sox pitcher Ed Karger tried to sneak in a few warm-up tosses between innings one day, A’s infielder Stuffy McInnis stepped into the batter’s box and belted one of Karger’s offerings into the deep recesses of the outfield. Boston players had not even taken their positions yet and McInnis rounded the bases. The umpires counted the run.

--Germany Schaefer of the Senators executed the first officially recorded “steal” of first base in 1911, going backward from second to first in an attempt to draw a throw from White Sox catcher Fred Payne. Unable to find any rule prohibiting the practice, umpire Tommy Connolly allowed the play to stand. A regulation was later implemented disallowing the tactic.

--The 2012 NL Wild Card Game between the Braves and Cardinals was marred by an improperly invoked infield fly ball rule. Cardinals shortstop Pete Kozma dropped a ball that would have put the Braves in prime position to score, but left field umpire Sam Holbrook made it an automatic out when he ruled the pop up an “infield fly.” Replays proved that the ball was too deep and that Kozma was not camped under it—two conditions that must be satisfied in order to invoke the rule.

--In Game 5 of the 1911 World Series, the winning run should not have counted since Larry Doyle of the Giants missed home plate. Under existing rules, it is up to the defensive team to point this out and make an appeal. Fearing that a protest would incite a riot, A’s manager Connie Mack opted not to issue a challenge. Umpire Bill Klem had no choice but to allow the run. 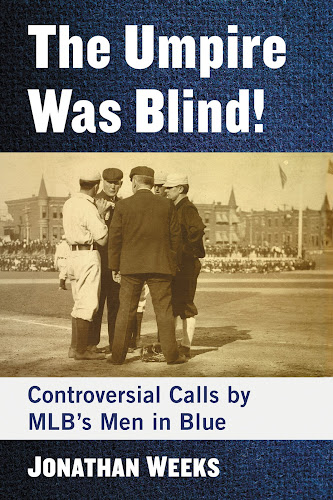 In the words of former American League umpire Nestor Chylak, umpires are expected to “be perfect on the first day of the season and then get better every day.” Forced to deal with sullen managers and explosive players, they often take the blame for the failures of both. But let’s face it—umpires are only human.

For well over a century, the fortunes of Major League teams—and the fabric of baseball history itself—have been dramatically affected by the flawed decisions of officials. While the use of video replay in recent decades has reduced the number of bitter disputes, many situations remain exempt from review and are subject to swirling controversy. In the heat of the moment mistakes are often made, sometimes with monumental consequences.
Read an excerpt:

…“The Streak” was in serious jeopardy on multiple occasions. In fact, DiMaggio extended it during his final plate appearance nearly a dozen times. But never was he more in danger of losing it than on June 10 at Chicago’s Comiskey Park. After a pair of groundouts and an infield pop-up, the Yankee icon came to bat in the seventh inning against right-hander Johnny Rigney, who was one of Chicago’s top hurlers in those days. DiMaggio smashed a sizzling grounder to third, where the sure-handed Dario Lodigiani was stationed. “Lodi” could only block it with his body, but he recovered in time to nail the Yankee centerfielder at first by a quarter of a step. Fortunately for DiMaggio, first base umpire Steve Basil saw things differently, making a “safe” call on the play.

Basil, who had turned to umpiring after his playing career stalled out at the Class-D level, was in his sixth year of major league service. Though generally even-tempered, he was not afraid to assert his authority when his calls were held in question. Never was this more apparent than in June of 1938, when he tossed three members of the St. Louis Browns out of a game for arguing balls and strikes.

According to AL arbiter Joe Rue, Basil was a bit of a tattletale who was constantly trying to curry favor with MLB officials. In particular, he had established intimate relationships with umpire supervisor Tommy Connolly and AL president William Harridge. “Basil was always playing up to Connolly,” Rue asserted bitterly. “And he’d run to Connolly and Harridge with everything.”

There was no need to seek the counsel of league officials on the date in question. In fact, the White Sox hardly protested at all as DiMaggio’s streak was extended to twenty-five games. Basil’s call proved to be of monumental importance when Joe D. grounded into a double play in his final at-bat of the day. Had Basil made the correct decision, “The Streak” would have been divided into two roughly equal halves—impressive, for sure, but not exactly the stuff that legends are made of.

The events of July 17, 1941, have attained an almost mythical quality. DiMaggio had pushed his streak to fifty-six games and was on his way to Cleveland’s Municipal Stadium in a cab when the driver, recognizing the iconic outfielder and his teammate Lefty Gomez, said ominously: “I got a feeling if you don’t get a hit in your first at-bat today, they’re going to stop you.” (Several versions of the quote exist) Flabbergasted, Gomez snapped: “Who the hell are you? What’re you trying to do—jinx him?”

The jinx appeared in the form of Indians third baseman Ken Keltner, who made a pair of spectacular stops to rob DiMaggio. “The Streak” ended that day and “Joltin’ Joe” hit safely in his next 16 games. Many years after the fact, he claimed to have had an encounter with the mysterious Cleveland cab driver. “Now this is thirty years later,” DiMaggio asserted. “He apologized and was serious. I felt awful. He might have been spending his whole life thinking he had jinxed me, but I told him he hadn’t. My number was up.”

Weeks spent most of his life in the Capital District region of New York State. He earned a degree in psychology from SUNY Albany. In 2004, he migrated to Malone, NY. He continues to gripe about the frigid winter temperatures to the present day. He has published several books on the topic of baseball. He would have loved to play professionally, but lacked the talent. He still can't hit a curve ball or lay off the high heat. In the winter months, he moonlights as a hockey fan.

https://www.amazon.com/Jonathan-Weeks/e/B00DXL3JM4%3Fref=dbs_a_mng_rwt_scns_share
Jonathan Weeks will be awarding a $25 Amazon Gift Card to a randomly drawn winner via rafflecopter during the tour.
a Rafflecopter giveaway
Posted by Andi at 3:30 AM
Labels: book promo