Read an excerpt from Dabsy on Society by Kenneth R. Leonard, Sr.

Welcome to the blog tour for Dabsy on Society by Kenneth R. Leonard, Sr.! Check out this excerpt from this historical fiction before you download your own copy. Enjoy! 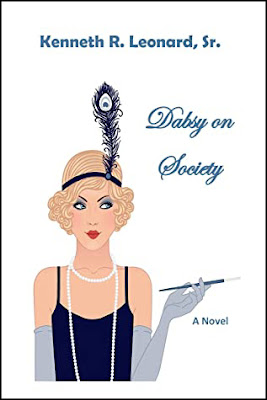 Helen “Dabsy” Dabson was young, beautiful, and wealthy beyond belief; everything needed to embrace the opulence of the Roaring Twenties. Birthed into a life of privilege, Dabsy spent time with friends smoking, drinking, and engaging in merriment. Easily bored, Dabsy willingly broke with tradition to try anything that captured her attention. Already a fun-loving socialite with a conscience, Dabsy decides to take over the society pages of her uncle’s newspaper. She quickly discovers that what started as a lark has turned into a crusade to report the news. Will Dabsy’s avid curiosity put her life in danger?

Excerpt
Dabsy sat with Dan at his club, but she wasn’t watching the dancers or listening to the band. She kept her eyes open and watched the activities in the club. Rough looking men lounged around, their evening dress unable to hide their ugly demeanor and hateful eyes. As one man leaned over to speak to Dan, Dabsy was surprised to see a gun under his suit coat. She wondered if the others also had guns. When she danced close to Dan, she bumped his left side and felt the gun under his arm.
"I’m sorry your car got destroyed.”
“Thanks. Two men got killed in those fires, but it turned out to be a blessing for us. The paper bought me a new Rolls Phantom and the girls new Fords.”
“A Rolls Phantom! Will you take me for a spin?” She could hear the envy in Dan’s voice. “Sure!”
Dabsy noticed Joe’s hate-filled eyes as he observed them exit the club. He let it be known around town that even though he was making twice as much money, he didn’t like being fired and blackballed by a rich brat. Old friends shunned him, and others gave him the cold shoulder. A cloak of invisible leprosy covered him. Dabsy felt he got what he deserved.
“It’s nice of you to let me drive,” Dan said as they cruised down the street. “I’m going to get me one of these.”
“It’s spiffy! It’s a big improvement over the old Rolls. They made lots of changes. I highly recommend it.”
“You don’t need to sell me.” Dan maneuvered a curve faster than necessary. “This beauty hugs the road. You could race this if it weren’t a Rolls.”
Dabsy laughed. “That never stopped me before.” “No, I meant on a track against other drivers.”
“So, did I!”
Dan almost lost control as he glanced at her. The look on her face told him she was serious. “What haven’t you tried?”
“You’d be surprised.” Dan smiled and focused his attention on the road.
Dabsy watched the moon rise above the trees. “I love flying on nights like this. The moon is so bright, and the cities are so full of lights.”
“You don’t mean you fly a plane?”
“Uncle Harry and Herman invested in an aircraft plant. I love barnstorming.”
Dan furrowed his brow. “What’s that?”
“Flying around the country in a two-seater. Landing in fields and taking people for rides for a dollar a minute. The ex-servicemen are doing it to earn a living and to keep flying. What I really want to try is wing-walking. I hear it’s the bee’s knees. It’s supposed to be very exhilarating.”
“You don’t mean to actually walk on the plane’s wing?”
“Yes.” “While it’s in the air?” “Ab-so-lute-ly! Upside down. Doing rolls. All of it.” “Your parents and Harry are okay with that?”
“No, they about cast a kitten when they found out I was flying. But if I try it, they won’t know about it until it’s over.”
“You’re crazy!” “That’s what everyone says.”
“You’re full of surprises. By the way, I meant to ask how you got your nickname?”
“Uncle Harry gave it to me as he observed me gurgling in my crib. Why?”
“The name seems so childish. It doesn’t fit the woman you’ve become. In fact, it’s a bold contrast.”
Dabsy laughed. “I’ve never thought about it meaning anything. It’s a name I like a lot better than Helen.” She gazed out the window a few moments. “When I think about it, I guess Helen seems so confining. I was named after my mother’s aunt; a wonderful woman, but very formal and proper. The name Dabsy is free. Nothing is expected of her.” Dabsy turned to peer at Dan and changed the subject. “Talking of surprises, why do you carry a gun?”
do you carry a gun?”
“I felt you checking it out when we were dancing. Are you afraid of guns?” he asked, evading the question.
“Not at all. I shoot.” “Are you any good at it? “I can hold my own. I have several trophies.”
“With a pistol?
“Pistol, rifle, shotgun. It’s a great sport. Herman taught me. So, why do you carry a gun?”
“Running my club brings in all kinds of people. I never know when someone will try and rob us. I’m not in a good part of town, but that’s going to change. I purchased a building uptown along the main drag. It’ll be ready in a few weeks. Care to check it out?”
“I’m game! The night’s still young.”
The new club was more lavish than the old one. Chandeliers hung from the ceiling and a beautiful oak bar curved around the dance floor on one side. The dance floor was twice the size of the current one. Polished wooden tables and chairs dotted the floor. The bandstand was tiered so that all the musicians could be seen, and the acoustics would bring out the best in the music. The walls were a light blue and set a dreamy mood when Dan changed the lighting.
“Wow! This is sexy!”
“Nothing but the best in everything, including my woman.” Dan wrapped her in his arms and kissed her longingly.
Posted by Andi at 8:00 AM