Crafting a Fictional World by A. Gavazzoni, author of Sketches of Life

What inspires you to write? Each author has a different answer to that question, along with a different method for crating their fictional worlds. Today, author A. Gavazzoni takes us behind the scenes of her writing life. You can also read an excerpt from her book Sketches of Life. Ask her questions as you follow the tour. Best of luck entering the giveaway! 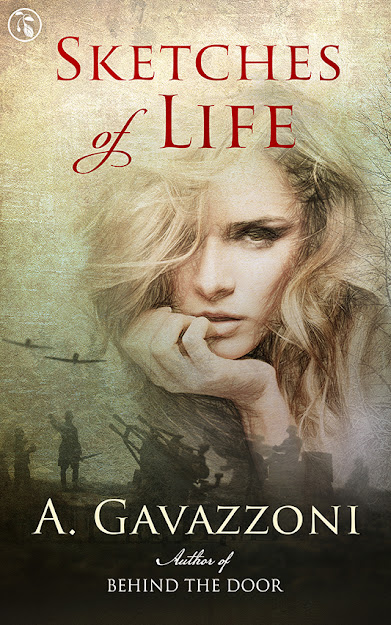 In the middle of WWII, France has surrendered to Germany, and young Lily, half French and half American, has her life turned upside down. A careless girl full of dreams, Lily must leave France and go to her father’s homeland, taking her mother with her. Lily’s mother becomes completely dependent upon her teenage daughter, and Lily is forced to grow up quickly. Trying her best to support them both, balancing work and dreams of continuing her studies, Lily meets her first love and discovers passion and betrayal on her way. Ninon is a survivor. Alone in the world, she works as an exotic dancer in a French cabaret called Le Passioné, where she moves her hips to put food on her plate until a new and dangerous opportunity is presented to her. Although Ninon has lost faith in love and God, life will show her surprises can be found around every corner. France, the United States, Spain, Austria, and Argentina present the backdrops for an epic tale of people trying to adapt to a world in turmoil—one that’s filled with secrets and surprises.
Read an excerpt:

Having nobody else in the world and nothing to lose is terrifying, but it’s also liberating. No matter what I had to do, I would have the courage. I couldn´t disappoint anybody, nobody would cry over my actions, and I had nobody to please.

Things are as big as your proximity to them, and if you keep your distance, nothing can scare you or threaten you. Everything is just a matter of perspective, and the secret to surviving was to keep my heart safe and never expect anything from anyone. In the end, all feelings, good or bad, are only as powerful as you allow them to be.

I learned to live day by day, planning but not living for my plans, trying to solve just the problems I had in front of me and not worrying about things that hadn´t introduced themselves yet. As life had shown me, and Malena once told me, we had no control over the future, and it was as unpredictable as the ocean—it could drown a person if they thought they could tame it.

Available on Amazon
(affiliate link)
Crafting your fictional world
Usually, when I start a book, I have an initial story in my mind, set in some specific area of the world. When I write, however, I live the story inside my mind. My characters talk, they “tell me” what they are going to do, where they are going to go, and sometimes, the whole story changes. Occasionally, I need to make changes to the story due to the fact I’m always worried about writing fiction based on believable characters, places, and events.

I’m a voracious reader, and I hate when I read a book and the facts and places are completely phony. I feel betrayed by the author, so I wanted to write fiction but in a way the reader could read my novel and believe the events really happened, that a disease has scientific basis, that a procedure is really done the way I’ve described, etc., so I compose every scene by making sure it’s as close to reality as possible. I visit places, I take pictures to reference while writing, I study scientific texts, and most of all, I research as if I’m defending a client and I need to prove my point of view for jurors and judges.

For me, writing is a combination of inspiration and hard work. Inspiration is the fuel for the story, but research is what makes the story believable, and I need my readers to trust my words in order to be transported to other times and to feel what I’m writing. Factual accuracy allows a reader to dive into my stories with the certainty they are going to learn about fictional lives through relatable characters…people they could meet on a street corner.


Adriana speaks Portuguese (her native language), English, French and Spanish and she loves to travel. Adriana loves to cook for her friends, to dance the tango, to work out, she is a voracious reader and a proud dog's mom of two girls, Juno and Charlotte.

https://www.facebook.com/A-Gavazzoni-513404948849469/
A. Gavazzoni will be awarding $10 Amazon or Barnes and Noble GC to a randomly drawn winner via rafflecopter during the tour.
a Rafflecopter giveaway
Posted by Andi at 3:30 AM
Labels: giveaway