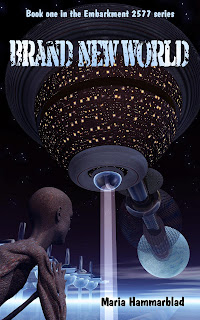 When Alexandra wakes up in an unknown environment, populated by a cat-like woman with a tail and a hologram of a rockstar, she knows she has to be hallucinating. Maybe she hit her head, or finally suffered that nervous breakdown. It doesn't get any better from finding out she died and was taken into the future by the elusive Adam, whom she can't remember, or from people telling her she's on a spaceship.

The last year or so is gone from her memory, and she has no choice but to try to adapt. As days go by, her new environment becomes more and more unnerving. She finds herself helpless, and completely dependent on a man who isn't even human.

"Brand New World" is the first novella in the "Embarkment 2577" series.


I was a real asset in a stressful situation: I slept through the computer coming back online. I woke from Adam stroking my hair and saying my name. It felt good. “Mmm, hi.”
“It’s a shame to wake you, but we need to go.”
“This is a very comfortable floor. You go save the day, and come back to get me when you’re done.”
He laughed softly. “I’ll find you a chair on the bridge that’s even more comfortable.”
“You’re not getting me coffee?”
“I wish I could. Here, put this on.”
He held out a peculiar visor to me. It resembled some futuristic scuba gear. “What? We’re going swimming?”
The man was the epitome of patience. When I didn’t take the visor, he put it on me. “We need to go to the bridge now, and you will need air on the way there.”
Wearing the breathing device was awkward, and the air had a peculiar taste. I could breathe though, so I didn’t complain.
He paused just inside the door to the corridor. “Stay right behind me, just in case. Are you ready?”
As ready as I’d ever be.
I squeezed my eyes shut when he opened the door to the corridor. No harm in delaying whatever horrors might await for a second or two, right? When I opened them again, Adam crouched next to three motionless bodies. “Are they… Are they dead?”
“They’ll be fine, but they’ll have wonderful headaches when they wake up. Come on.”
My plan didn’t seem all that great anymore. What about people who might be sick, or pregnant, or something. Would they die?
“Alex, I pumped in a mix of sevoflurane and nitrous oxide. They’ll be out for a while, but they’ll be fine.” His words woke me from my paralysis.
Strewn with bodies, the beautiful corridors turned into a nightmare. I kept trying to peek over my shoulder to see if a monster might be sneaking up on us, but the visor wouldn’t turn that far.
There was an unconscious Logg in the lift. I shifted my weight from foot to foot, unwilling to go in, and Adam pulled the furry body out.
“Do you think the others made it to the bridge before…?” My mental image of everyone falling to their deaths, put to sleep during the long climb was too horrendous.
He took my hand and led me into the elevator. “I think they picked up masks just like yours, and I think they’re waiting for us.”
Waiting? How could they be? We only had to climb eight floors, and they needed to go thirty-three. Oh no… “You didn’t let me sleep, did you?”
“Just for a little while.”
Great. The entire rescue operation stalled because I needed a nap.
Adam squeezed my fingers. “No matter what happens, it’ll be a long day.”
The top floor was almost empty. It would make sense to empty the ship from there down, and only a few stocky, furry bodies hindered our way. I stepped over one, hoping it wouldn’t wake up to grab my ankles. 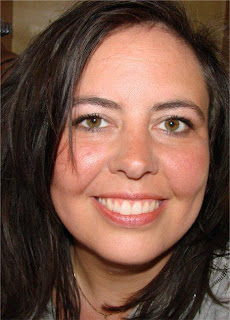 Author Bio:
Born in Sweden in the early 1970's, Maria showed a large interest for books at an early age. Even before she was able to read or write, she made her mom staple papers together into booklets she filled with drawings of suns and planets. She proudly declared them, "The Sun Book." They were all about the sun. She also claimed, to her mother's horror, that her being on Earth was a big mistake and that her alien family would come and bring her home at any moment. This never happened, but both the interest in space and the passion for bookmaking stayed with her.

As an adult Maria's creativity got an outlet through playing bass in a number of rock bands, and through writing technical manuals and making web pages for various companies and organizations. She did write drafts for a few novels, but the storytelling muse was mostly satisfied through role playing online on Myspace. It was here, while writing stories together with people from around the globe, she stumbled onto Mike. They started talking out of character, and she moved over to Florida to him late 2008. Today the two are married and live in the Tampa Bay area with three rescue dogs.