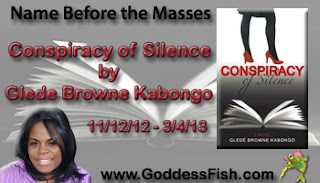 Welcome to the Name Before the Masses virtual tour for Glede Browne Kabongo! She was kind enough to answer some questions so that we can get to know her better. I am also introducing you to her book Conspiracy of Silence. Thanks for stopping by!

Everyone has secrets and sometimes, tough decisions have to be made about whether or not to reveal those secrets. I had a conversation years ago with someone close to me and I was shocked by what she told me. That sowed the seeds for Conspiracy of Silence. I decided to focus the story on a beautiful, Ivy League educated executive who is forced to confront a secret she buried many years ago, and the consequences that follow. The book ends with a dramatic courtroom showdown, which ironically, sets her free psychologically.

Who is your favorite character in this book? Your least favorite?

I don’t have a most or least favorite character. They all presented certain challenges during the writing process. They’re all flawed but truly believe that their actions are justifiable, no matter how terrible or ill-conceived. I will say that the protagonist Nina Kasai perhaps was the most challenging because I needed her to be someone the reader could root for but someone who also frustrated them. One reviewer said Nina made her want to throw her e-reader at the wall. Another reader said she wanted to slap Nina, and this reader is a pretty laid back lady. So I guess I accomplished those goals.

What is it about courtroom dramas that you think keeps readers glued to the pages?

In a way, a courtroom drama is like theater and I think that’s what keeps readers glued to the pages. The characters are larger than life, you never know what they’ll do next or what surprises may pop out of nowhere. There is a lot at stake, and the final outcome often has far-reaching consequences.

Courtroom dramas on TV have long been a vice for people. Do you believe that truth is stranger than fiction when it comes to these cases?

One of the longest running television franchises in history, Law & Order owes its success to “ripped from the headlines” stories so yes, the truth is often stranger than fiction.

What do you have to do, as an author, to make yourself stand out in this genre?

What other projects are keeping you busy right now?

I’m writing my next novel about a woman who receives a mysterious phone call from a stranger telling her to leave her family for good or face prison time for a murder she didn’t commit. I also have my third book lined up and will probably start plotting that next year.

Island Beneath the Sea by Isabel Allende. I recently discovered her work and absolutely fell in love with her prose and meticulous research. I also read non-fiction and have my eye on The Trial of Henry Kissinger by Christopher Hitchens and La Seduction: How the French Play the Game of Life by Elaine Sciolino.

Which book(s) was most inspirational to you and/or is your favorite?

I don’t have a favorite book to be honest. I’ve been a voracious reader since I was nine or ten years old so It’s hard to just pick one. The Count of Monte Cristo by Alexander Dumas is on my list of books I love because it speaks to the tenacity and strength of the human spirit in the face of incredible odds. I like Caribbean by James Michner partially because of my Caribbean heritage but also because of the seamless blending of historical facts and fiction. I was familiar with a lot of the history explored in that book so it was a heart-warming read for me. Every Day a Friday by Joel Osteen is inspirational and is on my bookshelf right now.

What advice do you have for aspiring writers?
Do the work, as in study the craft of writing and the business of publishing. Some writers are naturally gifted and others have to work at it. In both cases, the work still needs to be done. With the explosion of self-publishing it’s now easier than ever to become a published author but if writing is a serious endeavor, one that you’ll focus on as a long-term career, there’s no substitute for the hard work.

Thank you for your time! 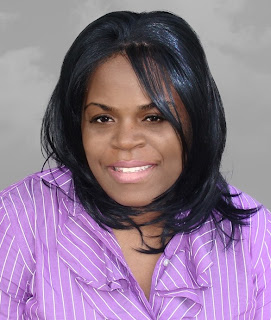 Gledé Browne Kabongo began writing at age 14 when she covered soccer matches for her hometown newspaper. She has also written for the Patriot Ledger and Metrowest Daily News, two Massachusetts based newspapers. She earned a master’s degree in communications from Clark University, and once had dreams of winning a Pulitzer Prize for journalism. These days her dreams have shifted to winning the Pulitzer for fiction, and a Best Screenplay Academy Award. For the past decade, Gledé has worked in senior marketing roles for organizations in the Information Technology, publishing and non-profit sectors. She lives in Massachusetts with her husband and two sons. 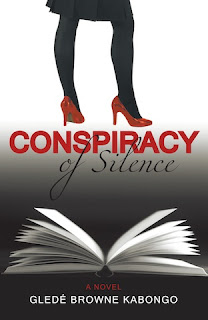 She has the perfect life—and a secret worth killing for.

Nina Kasai is a gorgeous, Ivy League educated executive who would do anything to keep her past a secret, even from her husband. Seventeen years ago, she ran for her life and the truth has been locked away in the pages of her hidden diary, and in the mind of a disturbed woman who will never tell—ever.

When Nina lands the cover of a prestigious business magazine however, she can no longer hide from the powerful enemy she escaped. Phillip Copeland wants to be the next Governor of Massachusetts and he’s not above using his power and influence to silence Nina. He warns her to keep quiet about what happened all those years ago—or else.

As the stakes are raised, both politically and personally, Nina realizes the only way to win this game is to tell the truth. But who will believe her since her diary has been destroyed, and the only other witness isn’t talking?

Nina’s one chance at reclaiming her life hinges on a dramatic courtroom battle where nothing is as it seems. And when the verdict is read, four lives will be forever altered.

The telephone rang at three a.m. A drowsy Nina answered it.
“I have bad news.”
She didn’t need a psychic to tell her that. It was three in the morning.
“What is it?” she asked Dan McCloud.

Nina turned on the lamp on the nightstand and rubbed the sleep from her eyes.

“How could she be dead? I just spoke to her last night. She emphatically told me she was going to lie on the witness stand.”

“It’s a tough break, for her and for us.” Dan McCloud couldn’t hide his disappointment. Even at this ungodly hour, he was thinking like a lawyer.

“How did she die?” Nina asked.

“Heart attack. She was on her way home and collapsed on the bus. She made it to the hospital alive but died shortly afterwards.”

“This isn’t a good time to bring this up, but we just suffered a major setback and we need to rethink our strategy,” McCloud said. “This case is going to come down to your testimony. I’m still optimistic about our chances, but you have to be the most compelling witness in this case. Your recollection of details is what’s going to persuade a jury to vote for a conviction. Can you meet me at seven?”

“What?” he asked without moving.

Marc popped up like a Jack-in-the-Box. “Where did she go?”

To hell is my best guess.


Gledé will be awarding an Italian leather journal to a randomly drawn commenter (US/Canada Only) during the tour. Follow the tour for more chances to win!
Posted by Andi at 3:30 AM
Labels: book promo, excerpts, giveaway, Goddess Fish, guest post