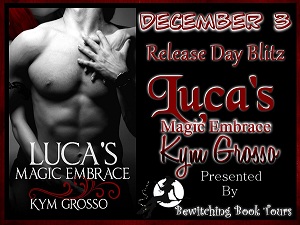 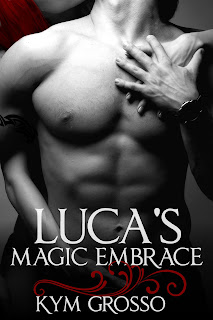 Sexy vampire, Luca Macquarie doesn't do love; especially not with humans. Yet, ever since he rescued Samantha Irving, he can't deny the enigmatic attraction he's developed for the alluring mortal woman. Concerned for her safety, he's determined to bring Samantha back to her coven. His mission is to go find the novice witch and bring her home, nothing more, nothing less; falling for her is not supposed to be part of the plan.

Samantha doesn't want to be a witch, yet that's exactly what she is. After failing to elicit her magic, she escapes to the mountains in an attempt to resume a semblance of her previous human life. When an arsonist torches her cabin, Samantha's worst fears are realized. Aware that her life is on the line, she reluctantly agrees to return to New Orleans with Luca.

"Yes,” was the only word he heard in response to his proposal; Luca lost control. Passionately and provocatively, he took her with a hungry urgency. It wasn’t sweet. His mouth claimed hers, savagely taking what was his. The intoxicating nectar of Samantha only made him kiss her more deeply. He wanted her in a way that he’d never wanted any woman. Determined to possess every part of her body and mind in the moment, he would claim her tonight. She’d be his forever.

Luca tore his lips from hers. “Bedroom. Now,” he commanded. Leading her by her small soft hand, he stopped her before they got to his bed.

“I will have you tonight, Samantha. After tonight, you’ll never forget that you are mine. And I will be yours.”

Samantha silently nodded in response. She was ready to commit to this man, this vampire. Luca was everything she’d ever wanted in a male: strong, loving, trustworthy, and passionate. She knew in her heart that giving herself over to him was all she desired now and for her future.

Luca unraveled the belt on her robe, slid his fingers underneath the soft fabric and slowly pushed it off Samantha, letting his hands glide from the smooth skin of her shoulders to her hands. As the robe pooled at her feet, he gently took her hands in his. She stood bare before his eyes. “You’re enticing, Samantha. I cannot seem to get enough of you. So the question is, do you want to play with me tonight? Be honest with me, darlin’, because I plan to take you to places we’ve never been before.”

Samantha felt womanly, exposed to Luca. She trusted him completely as he released her hands and placed his on her waist. “Luca, please, hurry. I can’t seem to keep my hands off of you.”

“Well, I guess we’ll have to do something about that,” he smiled knowingly. “Turn around, face the wall. Don’t move unless I tell you. It’s time for some fun.”

Without question, she complied and waved her bottom at him, shooting him a sultry look that said, ‘come and get me’.

“Samantha, you are everything I’ve ever wanted in a woman; beautiful, smart.” She let out a small moan; he rubbed his hard aching bulge against her. He wanted to fuck her right now, but he wouldn’t dare. No, he planned to make her beg for mercy as he slowly brought her to orgasm over and over.

Though he was still fully clothed, she could feel his magnificent erection against her bum. She wanted him in her now; she grew wet from the intense ache between her legs. “Please, Luca.”

His hands slid from her ass around to lie just beneath her sensitive bosom. She moved slightly to urge him to cup her breasts. He smiled, smelling the overwhelming scent of her desire, but he wanted to draw out the anticipation, tease her with delight. “No, no, no, darlin’. Not tonight. You don’t get to decide when or how the pleasure happens. You wanted to play, so play we shall,” he whispered into her ear. Goosebumps ran over her skin in response to his hot breath. “Tonight is about wanting what you can’t have until I give it to you. It’s about me savoring every stroke of your flesh. The ultimate pleasure, tasting you while you come, screaming my name. Now, do you want me to touch your lovely breasts? Tell me, Samantha.” 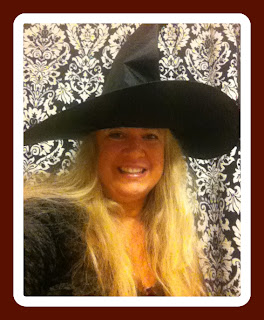 Luca’s Magic Embrace is my second paranormal romance novel, which is the second novel in the Immortals of New Orleans Series. I have also written and published several articles about autism. I developed a late interest in writing after my son was diagnosed with autism and I started advocating on his behalf. Three years ago, I started my own website, www.AutismInRealLife.com and now blog and write articles for PsychologyToday.com.

I live in Pennsylvania with my husband, two children and our dog, Ace. My hobbies include autism advocacy, reading, tennis, zumba and traveling. New Orleans is one of our favorite places to visit with its rich culture and unique cuisine. But we also love traveling just about anywhere that has a beach or snow covered mountains. I love reading mysteries, romances and about all things regarding vampires, werewolves and other supernaturals.