'If It's Tuesday, It Must Be Trouble' Book Tour 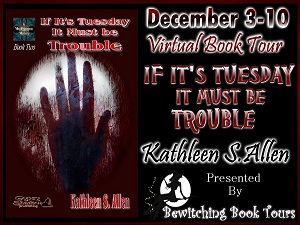 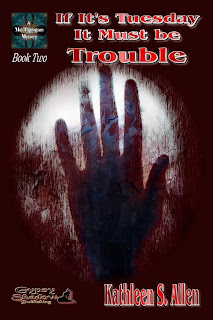 IF IT’S TUESDAY, IT MUST BE TROUBLE!
Mel Thompson Series Book Two
By Kathleen Allen

Mel Thompson, P.I., former cop returns in her second murder case. It’s the first case she’s taken since she almost died at the hands of the murderer from her last case, three months ago.

Things are looking up a bit though, her cop boyfriend moved back in, the back surgery she had seems to have dulled the pain in her leg and she’s working as an intern in a fashion house in order to catch a murderer.

The fashion world is an alien one to Mel but she’s eager to learn in order to figure out who killed an up and coming designer who just happened to be the sister of the senior buyer. Mel plans on being an intern for a few weeks, getting the information she needs and getting out.

This was a quick and fun read. The book is a sequel and often refers to the first book, but it does stand on its own. I have to say, though, that now I am intrigued to read the original book first-hand, to get fully understand Mel's story.

I had moments of snickering thoughout the story, but overall enjoyed watching the mystery unfold. It was a different type, as it takes place in the fashion industry, but still intriguing. 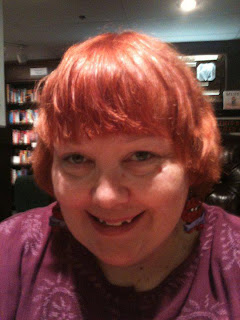 About the Author:
I am an urban faerie born without wings but I fly on the wings of imagination tethered to this mortal coil. Moonlight sustains me and sunlight devours me. Stars swim in my eyes and my soul bleeds on a daily basis. I am a writer.
www.kathleensallen.weebly.com