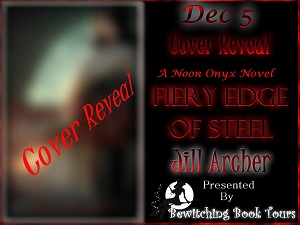 Welcome to the cover reveal for Jill Archer's upcoming book, Fiery Edge of Steel, a Noon Onyx novel. This is the sequel to Dark Light of Day: 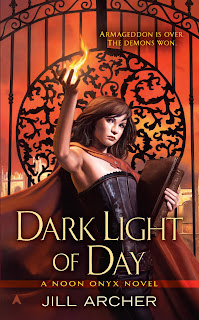 Armageddon is over. The demons won. And yet somehow…the world has continued. Survivors worship patron demons under a draconian system of tributes and rules. These laws keep the demons from warring among themselves, the world from slipping back into chaos.

Noon Onyx grew up on the banks of the river Lethe, daughter of a prominent politician, and a descendant of Lucifer’s warlords. Noon has a secret—she was born with waning magic, the dark, destructive, fiery power that is used to control demons and maintain the delicate peace among them. But a woman with waning magic is unheard of and some will consider her an abomination.

Noon is summoned to attend St. Lucifer’s, a school of demon law. She must decide whether to declare her powers there…or attempt to continue hiding them, knowing the price for doing so may be death. And once she meets the forbiddingly powerful Ari Carmine—who suspects Noon is harboring magic as deadly as his own—Noon realizes there may be more at stake than just her life.

About Fiery Edge of Steel, the sequel:

FIERY EDGE OF STEEL
Lucifer and his army triumphed at Armageddon, leaving humans and demons living in uncertain peace based on sacrifice and strict laws. It is up to those with mixed demon and human blood, the Host, to prevent society from falling into anarchy.

Noon Onyx is the first female Host in memory to wield the destructive waning magic that is used to maintain order among the demons. Her unique abilities, paired with a lack of control and reluctance to kill, have branded her as an outsider from her peers. Only her powerful lover, Ari Carmine, and a roguish and mysterious Angel, Rafe Sinclair, support her unconventional ways.
When Noon is shipped off to a remote outpost to investigate several unusual disappearances, a task which will most likely involve trying and killing the patron demon of that area, it seems Luck is not on her side. But when the outpost settlers claim that an ancient and evil foe has stepped out of legend to commit the crimes, Noon realizes that she could be facing something much worse than she ever imagined…

Genre: Fantasy, with elements of mystery and romance (Note: Fiery Edge of Steel is not UF, although it would appeal to many UF readers) 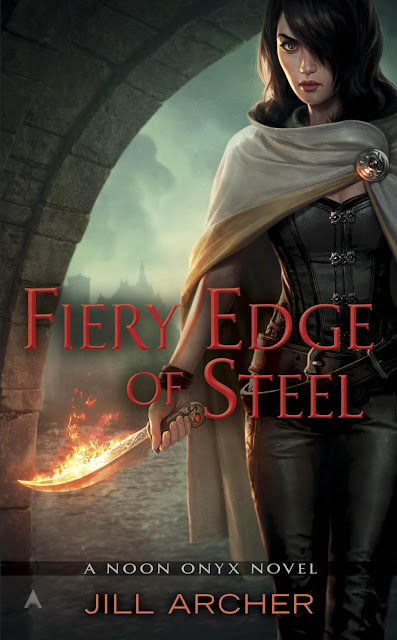 
Check out this tour-wide giveaway! Simply follow the directions as you fill out the Rafflecopter for your chance to win!
a Rafflecopter giveaway
Posted by Andi at 12:00 AM
Labels: Bewitching Book Tours, book promo, Cover Reveal