'The Old Man and the Monkey' Book Tour & Review 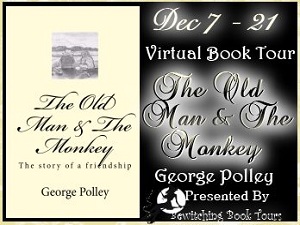 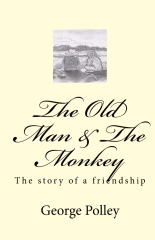 The Old Man and The Monkey
George Polley

The Old Man and The Monkey is about a village elder in Japan and the large monkey who became his friend over the last five years of his life. Since the villagers don't like monkeys, none of them approve of the friendship between the old man Genjiro Yamada and Yukitaro ("snow monkey" in Japanese).

But Genjiro refuses to give up the friendship, even when his wife objects to it. After all, monkeys are nuisances and thieves. But over time, both Genjiro’s wife and the villagers come to grudgingly accept him, especially when, on several occasions, they receive a special blessing from him.

'The Old Man & The Monkey' is a stunningly beautiful story of a relationship which develops between an old man and a creature which is regarded as a dangerous pest in Japan, a snow monkey, in George Polley's moving allegory of dignity in the face of prejudice and racism.

In a small park near one of the rivers that run through the city of Asahikawa, Hokkaido, there is a bronze statue of an old man and a monkey seated side by side on a wide flat stone looking out over the river and the mountains. The monkey is bigger than ordinary snow monkeys; the top of his head reaches to the old man’s shoulder.
Looking at the bags under his eyes, one can see that the monkey, like the man, is elderly. Affixed to the base of the statue is a bronze plaque that reads: “Genjiro and Yukitaro.” These two old friends sit and warm themselves in silence as the years and seasons pass.
As Long as long as the statue has been there, people passing by have paused, wondering how a monkey and a man could become friends because, as everyone knows, monkeys are pests and can be dangerous when humans get too close. Some people tell each other that such a friendship is unnatural, and that because it is unnatural, is impossible. Others believe that Genjiro and Yukitaro are characters that the artist made up. But everyone agrees that the statue is appealing, because the two old friends have such an air of tranquility and peace about them that people come and sit down next to it to enjoy their lunch, or to just sit quietly and look out at the river and the mountains, later commenting on how peaceful the experience was.
So it is that the old man and the monkey receive a constant stream of visitors who sit and enjoy their company in silence and take something of them away to warm themselves.
No one believes the old man and the monkey were real; but I know that they were because the old man was my grandfather, Genjiro Yamada, and Yukitaro was his companion and friend for the last five years of his life.
Now is the time for me to tell their story and reveal for the first time how an improbable friendship like that between a man and a monkey happened, how it was good, and how it ended.

This story left me feeling warm and fuzzy and emotional, all at the same time. Despite our best efforts, we still tend to fear those who are different from us, when sometimes the different ones can make the best friends and blessings.

I honestly thought that this was a folktale that had been passed down from generation to generation in a land overseas. I didn't realize that it was based on a dream that the author once had. It's language and Polley's storytelling make it seems like a tale as old as time.

As an adult, I loved the message of the story, as a way to remind myself to be more accepting. As a teacher, I love this story because of its lessons. I would definitely use this in the classroom.