“Becoming Animals” is a story of a dying girl that works hard to save herself by escaping into a mind of an animal. Before she finally does that, she gets to “ride” many different kinds of animals. But while animals have very similar organs to humans, the way they use them is different. In particular, animal cognition is both familiar and radically dissimilar to ours. Just to give a few simple examples. Humans see in full color spectrum…at least that’s what we think. Dogs see in black in white, while birds see extra colors. Human sense of smell is rather weak, but a rat’s olfactory organs are amazingly well developed. People see the world from a height of several feet above the ground, rats from below an inch, birds from hundreds of feet up in the air. Just this change of perspective is a spectacular mind altering experience. In its essence, “Becoming Animals” is a story of mind-altering experiences and the desire of a child to survive a terminal illness by escaping into a mind of an animal.

A day is a very long time for a rat. So here are a few minutes of running as a rat:

“
He could smell food. Where? The scent overlaid the environment like a map.

Rufus ran in the direction suggested by slight radial variations in the strength of the odor. But the path had to be safe. Rufus always craved food, but when balancing hunger against fear, safety had to win out. Too bright! Stay in the shadows.

The blue luminance on his head was a nuisance. Rufus was stuck in mid-action—his back leg raised over his head, next to the bright blue light, ready to scratch, his paw just quivering on the edge of action. He never actually touched the thing embedded in his brain.

His stomach grumbled, returning his attention to food. Rufus ran again. He stuck to the edges, wary of the brightly lit center. But after he’d twice navigated the perimeter, Rufus realized the food was in a place he couldn’t get to without risk.

He heard a sound, and felt a familiar vibration of footsteps. He was used to the Big Ones—they provided food and water—but he knew this vibration pattern in particular. He paused, waiting to hear what would happen next. His ears turned in the direction of the sound, assessing its danger; his vision was limited to only what was right in front of his snout.

The high-pitched voice raised Rufus’s anticipation of emotional contact and food. After a moment of excitement, he felt his heart rate slow a bit; his littermate was here. She was one of the Big Ones, but she could be trusted; they had grown up together. She smelled right—like home.

Making himself limp so he could be lifted gently, Rufus settled against the warmth of his littermate’s hands. He could hear the slow rhythm of her giant heartbeat. Her breathing motions, and the slight gurgling and hissing sounds that emanated from her—these were comfortingly familiar. He closed his eyes and relaxed.

The change came on suddenly. There was brightness and clarity. Rufus raised his head above the fingers and looked around. There was still a lack of definition, but among the light and dark fuzziness that was the great out there, he could sense the functionality of the space. His home cage was placed up high—he had located it before from its odor, but couldn’t see it. Now he was certain of its location without the need to run and explore first.

Rufus was held high off the ground, and the littermate was gently rubbing the blue thing on his head, making it throb. That was good, for it had started to tickle and buzz.

Everything got sharper, more focused. With all the new information flooding in, Rufus was most pleased to learn where the tasty little snack pellets were stored. He contented himself with the anticipation of their crunchy goodness, satisfied, for now, with the feel of his littermate’s touch.
” 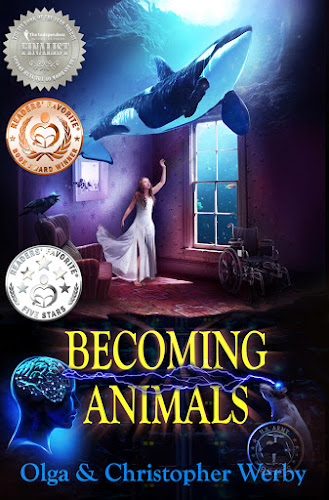 Humans have always wanted to know what goes on inside the minds of other animals. But what if humans could become animals? Toby’s father leads a team of neuroscientists directly connecting the brains of humans with those of animals. And Toby is a prodigy at throwing her mind into the animal subjects in his lab—she’s the best there is.

But Toby suffers from cystic fibrosis and she’s not likely to live into adulthood. Could a radical plan to embed her consciousness into an animal allow Toby to survive? And what does it mean to live without a human body?

Can Toby and her father solve the problem of fully merging two beings before she takes her last breath? Will the government succeed in stopping their efforts before they are done? It’s a race against death and into the minds of animals.
Read an excerpt:

After the major had left, Toby came into Will’s office and slipped onto his lap.

“I’d like to go to work in the lab with you and Ruffy,” she said.

“You heard?” Will asked, gently rubbing the girl’s back.

“School is boring,” Toby said. “And I like playing with Rufus,” she added. She was convincing herself as much as him, Will noted.

Toby didn’t say she’d miss playing with the other kids. Friendships needed plenty of time and some freedom. She was so restricted with her interactions and she missed so much school, she hadn’t gotten to make friends. Will felt the weight of responsibility. Could he keep his little girl happy? Was this the right thing for her?

“You’ll get a lot of time to play with Rufus,” he said. “But maybe you’ll get bored hanging around with us and all those lab rats.”

“There will be more soon. Now that we had a breakthrough, I’m sure we’ll get more animals, more different kinds of animals. But we’ll take it slow. I’ll make sure no one pushes you to do things you don’t want to do. I promise.”

Will hugged his daughter and he felt how fast her heart was beating. Almost as fast as Ruffy’s. 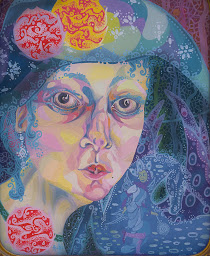 Olga Werby, Ed.D., has a Doctorate from U.C. Berkeley with a focus on designing online learning experiences. She has a Master's degree from U.C. Berkeley in Education of Math, Science, and Technology. She has been creating computer-based projects since 1981 with organizations such as NASA (where she worked on the Pioneer Venus project), Addison-Wesley, and the Princeton Review. Olga has a B.A. degree in Mathematics and Astrophysics from Columbia University. She became an accidental science fiction indie writer about a decade ago, with her first book, "Suddenly Paris," which was based on then fairly novel idea of virtual universes. Her next story, "The FATOFF Conspiracy," was a horror story about fat, government bureaucracy, and body image. She writes about characters that rarely get represented in science fiction stories -- homeless kids, refugees, handicapped, autistic individuals -- the social underdogs of our world. Her stories are based in real science, which is admittedly stretched to the very limit of possible. She has published almost a dozen fiction books to date and has won many awards for her writings. Her short fiction has been featured in several issues of "Alien Dimensions Magazine," "600 second saga," "Graveyard Girls," "Kyanite Press' Fables and Fairy Tales," "The Carmen Online Theater Group's Chronicles of Terror," with many more stories freely available on her blog, Interfaces.com.