Today, author Raj Anand is here to tell us the background of his book Apophis - Into the Folds of Darkness, the first book in the Kleos Chronicles. It's an interesting one! You can also check out an excerpt, plus there's a great giveaway at the end. Be sure to share your thoughts along the way!
*******************************
THE BACKGROUND OF THE BOOK
“Sophie this looks like a good book.”

I suggested to my 18-month-old daughter, while we together sat on the floor of a children’s bookstore in Bangalore in India, one afternoon in January, 2015.

The ever-inquisitive Sophie inquired and I could only recall and picture Socrates standing in the middle of Athens, while he pondered over a similar question.

I turned to the bookstore owner and asked if she had any books on the subject of ethics and philosophy for children.

“Why would you want to teach philosophy to children?”

The lady wondered and affirmed that to the best of her knowledge – no such book existed. And it was in that prescient moment, I became certain of the book that I was meant to write.

‘Philosophy and Children!’ Those two words haunted me for months, as I began to randomly explore various subjects including philosophy, time and space travel. I made a list of philosophers across most cultures, histories and geographies that I could gather. Until one day, I chanced upon what anthropologists and historians call THE AXIAL AGE. A moment in human history less than 150 years across, when several ancient philosophers including Socrates, Plato, Buddha, Confucius, Lao Tzu and several others began to question life and its very meaning.

For an inexplicable reason in over two decades of reading and gathering a rather eclectic collection of books, I had developed an over-arching interest in a few historical figures that had seeded a new premise into humanity’s perception and experience of the world. These new ideas, added to other layers of our cultural subset of experiences, sometimes turned the very reason for our existence on this planet on its head. But over a millennium, as these ideas coalesced to form a new way of exploring life and the world around us; they also began to be misused, mis-appropriated and some unfortunately also became dogma.

To re-examine the original premise by removing these musty layers of dogma in order to discover the fountainhead of this seed – the beginning – became a part of my obsession and promise of this book.

As did an attempt to contemporize the ancient philosophical precepts and to experience them from nine-year-old children’s perspective and their explorations.

Over five years of research and writing this book, I was presented with a veritable set of challenges, including:
To collate the above into a coherent narrative as well as a compelling story.

That was the challenge of writing APOPHIS – now complete. 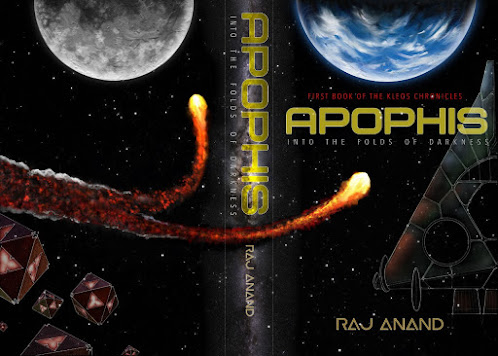 January, 2022: A dark monstrous twin-headed apparition – Apophis – feverishly races past the expanse of the Milky Way galaxy and bolts to the edge of the solar system. Recklessly accelerating, the sinister rock-dyad enters the gravitational keyhole of the blue planet and continues its resolute inebriated journey – to soon arrive with an apocalyptic impact on Earth.

December, 2012: Five sentient beings born in different cities – New York, Hong Kong, New Delhi, Azores Islands and Istanbul, discover amongst haunting memories of their phantasmal past lives, that it is their destiny to save humanity from the evil forces unleashed by the alien fiends – the Skyllats.

And now, the reincarnated 9-year-olds must rely on their shared, ancient wisdom to prepare humanity for the war across the galaxy that is imminent.
Read an excerpt:

The Barred Spiral Milky Way Galaxy
At the Edge of the Solar System
January 17, 2022 (Earth Time)

A dark monstrous apparition, slingshot from across another realm, camouflaged in a jagged, charcoal black rock, adroitly surfed the gravitational waves of the universe. Feverishly racing past the expanse of the Milky Way galaxy, it bolted to the edge of the solar system and arrived from above the plane of the ecliptic – gyrating closer to the sun.

The dark fiend continued its charge forward, cutting across the path of Venus – nearly crashing onto it, before it deftly decelerated and reached a stable orbit in a retrograde rotation around the pale-yellow planet. This tenacious temporary satellite immediately scrambled to steal a fragment of the protesting planet’s enormous momentum. Catapulted along the plain of the ecliptic, recklessly accelerating at an impossible speed – it shattered, splitting into two.

The newly formed rock dyad – a small black moon orbiting a sphere of death – pulled free from Venus. It continued its inebriated journey, salivating at the opportunity to rain a resolute chaos upon an orphic azure-blue bubble still 40 million kilometers away.

Unbeknownst to the alien rock dyad, a faint sliver of gold orbited nearby. The 7.5-meter-tall and 3.2-meter wide Sentinel Space Telescope clothed in a gold foil, with a giant heat-reflector shield strung along its back; cooled to 40 degrees Kelvin by a two stage, closed cycle Stirling cryocooler. Its 0.51-meter aluminum mirror, dutifully scanned any and all Inner Earth Objects larger than 90 meters in diameter that ever dared to fly across its 200-degree angle of regard.

The Sentinel Observatory, alarmed by the presence of the ghostly twin-headed monster, recorded the black rock dyad’s trajectory, shape, size, mass, and rotational dynamics, before it urgently sent a coded message to its home base in southern Japan.

Savinder Raj Anand is an architect and has been teaching Architecture & Design at various Universities in India for more than 12 years. A long-distance runner with a wanderlust to explore the world, and write stories that traverse across diverse cultures. He lives in Goa with his daughter, a dog, and two cats.

Inspired by his then 18-month-old daughter – when she quoted Socrates – while they together sat in a children’s bookstore in Bangalore (LIGHTROOM) in early January of 2015, he has completed this – his first book – as she turns 7 years old.

a Rafflecopter giveaway
Posted by Andi at 3:30 AM
Labels: Goddess Fish