Racing and romance. It's enough to get your heart pumping. Check out an excerpt from this exciting new adult romance, Full Tilt Boogie and then let author Leslie Scott know what you think in the comments. Follow the rest of the tour for even more fun. Best of luck entering the giveaway! 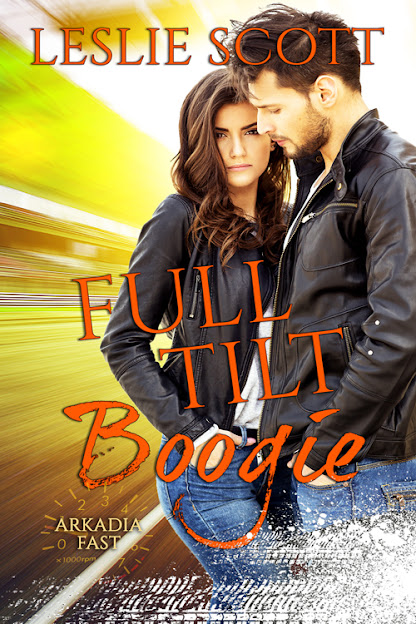 Breanna Casey has only ever wanted two things in life: to race and to get the hell out of Arkadia, Texas. Stifled beneath her family's turbo-charged reputation, she's got her thumb firmly on the self-destruct button. A night of hyper-driven racing and rebellion leads to a one night stand with the one guy who knows how to press all her buttons: Noah McKay.

Torn apart by the toll of his high-intensity enlistment in the Marines and guilt-ridden by what he's seen, Noah McKay left the military to find peace. A chance encounter sends him working for the parents of a raven-haired Amazon goddess with a tongue that cuts sharper than any knife. Quiet is the last thing he'll get.

Finally, she gets her chance. Calloway Racing wants her to drive for them. But that's not all they want. A good friend of her father's, Calloway insists she take Noah along for the ride. Suddenly, her dreams are feeling more like a nightmare. Will they be able to help each other, maybe even find love, when living life full tilt boogie?
Read an excerpt:

The tent was suddenly far too small and suffocating. Abruptly the song changed again. Silently I thanked the DJ for offering me a reprieve. To keep from smothering in Vic’s good intentions, I pulled away and sought refuge with what was left of my cake.

Let’s face it, going back to the table was an epic mistake.

With Vic and Cara on the dance floor and Isaac MIA, that left a surly Noah McKay as the only occupant. And I’d walked straight to him, ready for a fight.

“What’s your deal?” I shot as I tucked my purple skirt beneath my ass and sat down—hard.

He opened his mouth and his tongue slipped out and across his bottom lip, then he took seduction a step further and pulled the shiny, succulent flesh between his teeth.

“Sweet baby Jesus.” I pushed the cake away and let my forehead drop to the table. I couldn’t live like this. I was vastly inexperienced in such things—no matter how much swagger I put on.

He laughed. “My deal? I don’t know whether to throttle you or kiss you.”

Award nominated author of Two Hearts, One Stone and the Arkadia Fast Series, Leslie Scott has been writing stories for as long as she can remember. The happier the ending, the better. Currently, she lives and writes amidst her own happily ever after with her soul mate, son, and domestic zoo.

Twitter: https://twitter.com/leslieSwrites
Leslie Scott will be awarding a $20 Amazon or B/N GC to a randomly drawn winner via rafflecopter during the tour.
a Rafflecopter giveaway
Posted by Andi at 3:30 AM
Labels: book excerpt