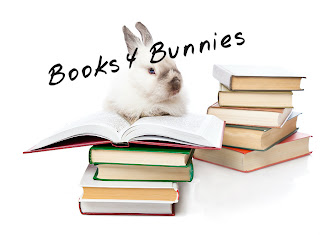 Books for Bunnies
Books for bunnies is an event set up by the blogger over at The Bunny’s Review and coordinated with the help of blogger Alchemy of Scrawl.
These two ladies have worked tirelessly in getting authors to donate eBooks for the event. Currently there are over 100 eBooks that have been donated., along with over 30 print books donated. Some of the print books are even signed by the authors themselves.
The event is to help raise money for the House Rabbit Society. The House Rabbit Society or HRS is a 501 non-profit organization to help raise awareness and to rescue rabbits from animal shelters. Below is a little about the background of the HRS.
House Rabbit Society Background
House Rabbit Society is a national, nonprofit animal welfare organization based in Richmond, California. Our mission has two parts:
In line with our mission, we are against the exploitation of rabbits.
Since HRS was founded in 1988, over 25,000 rabbits have been rescued through our foster homes across the United States. Many of these bunnies had run out of time at animal shelters and were scheduled for euthanasia; others had been deemed "unadoptable" because of age, health, or disposition. Because there is no time limit on our rescued rabbits, HRS foster parents are able to spend time getting to know each individual bunny and can then match him or her with an appropriate home. We neuter/spay all incoming rabbits, obtain any necessary veterinary care, and attend to their social needs.
In caring for so many diverse bunnies, our all-volunteer organization has learned a tremendous amount about their social, behavioral, and medical requirements. By sharing the collected information these rabbits have taught us, we are able to help other people improve their relationships with their rabbits. HRS provides educational materials to veterinarians and humane societies and helps individual rabbit people solve behavior and health problems, primarily through our web site, www.rabbit.org, and our quarterly publication, House Rabbit Journal.
Over the past 20 years, HRS has grown from 300 to more than 8,000 members, with local chapters and educators in over 30 states plus Canada, Italy, Hong Kong, Australia and Singapore.
Our web site, www.rabbit.org, is accessed over 100,000 times a day by people in dozens of countries around the world.
We are asking people to donate money to the HRS at this link through Network for Good. The person that makes a donation will receive either an eBook or print book equal to the amount donated. There are books ranging in price from 99 cents to $27.00. There are several print copies of the books that have been autographed by the author.
The person that donates will receive an email thanking them for donating. That email needs to be forwarded to books4bunnys@bunnysreview.com. This will show the amount that has been donated. Please remember there is not any donation that is too small. Any amount will be greatly appreciated. The HRS will use the money to either help pay for vet bills or help in finding a forever home for the hundreds of bunnies in their care.
Please, if possible, take a moment to donate a couple of dollars to the HRS. You never know what bunny's life you might be saving.
Suzie & The Bunnies - CupCake & Coale
Some of the available books:

The Night Watchman Express (The Crown Phoenix #1) By Alison DeLuca
Orphaned Miriam has always been terrified by the sound of THE NIGHT WATCHMAN EXPRESS as it hurtles by her house. The sound of the train gives her nightmares of an underground factory, and a laboratory where brutal experiments take place.

During the day she has very different problems. Her new guardians, the Marchpanes, have arrived with their son, Simon, to live in Miriam's house. The Marchpanes are plotting to take over her dead father's business.

As they are both strong willed and stubborn, Miriam and Simon develop an instant dislike for each other. They have to work together, however, in order to solve the mystery of what the Marchpanes are doing with Miriam's inheritance.

As they come closer to learning the truth, Miriam is kidnapped and put on THE NIGHT WATCHMAN EXPRESS, and Simon must try to rescue her. In doing so, he will have to confront his own parents and the evil forces behind them.

But as he tries to help Miriam, he is captured. Simon is put in a strange, luxurious prison, where his jailers are as hauntingly beautiful as they are dangerous.

As THE NIGHT WATCHMAN EXPRESS arrives at its destination, Miriam comes to the shocking realization that her nightmares about the subterranean factory and the dark laboratory were not just dreams.

What she always feared more than anything is going to come true.

Losing Beauty by Johanna Garth
Child abuse, cross-dressing, theft, adultery—people in Persey Campbell’s town have terrible secrets and she is the unfortunate repository for all of them. What she can’t figure out is why everyone is so desperate to tell her their worst secrets.
Daniel Hartnett is a lawyer who has it all. People think he’s lucky. What they don’t understand is Daniel has a crap-o-meter that lets him hear the meanings behind other people’s words. He used to think his crap-o-meter was a gift from God. It made him successful with his career and women. Except now he’d like to meet someone and settle down and he can’t turn his crap-o-meter off. As long as it’s on, there are no surprises, no rush of anticipation and no falling in love.
When Daniel meets Persey he discovers the first girl he’s ever met who is immune to his special talent. The only problem is someone else discovered Persey first and is hell-bent on claiming her as his own. Haden is the king of the Underworld with a plan to make Persey his immortal queen. What Haden doesn’t plan on is Persey’s unique ability to compel secrets and how far the people who love Persey will go to protect her from the inner darkness that threatens to destroy her soul.
About the Author: Johanna Garth is a writer of urban fantasy and mythic fiction for adults who resides with her husband and two children in Portland, Oregon. This is her debut novel.

Land of Nod, The Artifact (Land of Nod Trilogy #1) by Gary Hoover
Jeff Browning has been haunted by terrifying dreams since the mysterious disappearance of his father (a renowned physicist). But when he finds a portal in his father’s office, he must overcome his fears in an attempt to find him.
The portal takes him to another dimension – one populated by fantastic and dangerous creatures and also an advanced society of humans.
As Jeff looks for clues regarding what may have happened to his father, he is accused by some of being a spy while thought by others to be a prophesized figure . . . who may be the key to victory in a developing war.
The Last Good Knight by Connie J. Jasperson
Swashbucklers, pirates, sword fighting courageous Knights and Fair maidens abound in The Last Good Knight. In the tradition of a Wilbur Smith and Michael Crichton's Medieval block buster Timeline. Action abounds, it this historical fiction account.
From slaying dragons, to rescuing the King's Whore, to secret missions for good King Henri, no job is too big or too small for the Great Knight, Sir Julian Lackland. But what happens when the only one still willing to take on the bad jobs is too old to be doing them? How does a hero retire from the business of saving people?
Here begins the tale of the life and adventures of the peoples Champion. Invincible on both the field of battle and the bedroom, Lackland is a man of intense passion, the highest honor, and deepest loyalties. A mercenary, a bold warrior and a brilliant tactician, he is at times reckless beyond comprehension, and often suicidal; throwing himself into both battle and love with his entire being.
His heart is forever given to one woman, but she will never give up the sword, not even for him and her choices leave Lackland with no choices whatsoever. Despite the lack of resolution in his personal life, he somehow endures; his innate sense of the ridiculous, wry wit and humor concealing the fragile man that is Julian Lackland. From his days as a mercenary to his years as the arms-master of Waldeyn, obsession and honor rule his life; these two things both make him and break him.
But for all that Julian is the invincible Great Knight, he eventually becomes the Lost Knight. An incident occurs that changes everything and begins his descent into madness. Two great loves form the framework of his life anchoring his sanity and making a love triangle unlike any other. Yet, even in the depths of madness Lackland remains the very soul of knightly courtesy and true nobility; seeking that which was lost, and as always, making the world a safer place
Gabriel's Inferno (Gabriel's Inferno #1) by Sylvain Reynard
Enigmatic and sexy, Professor Gabriel Emerson is a well respected Dante specialist by day, but by night he devotes himself to an uninhibited life of pleasure. He uses his notorious good looks and sophisticated charm to gratify his every whim, but is secretly tortured by his dark past and consumed by the profound belief that he is beyond all hope of redemption. When the sweet and innocent Julia Mitchell enrolls as his graduate student, his attraction and mysterious connection to her not only jeopardizes his career, but sends him on a journey in which his past and his present collide. An intriguing and sinful exploration of seduction, forbidden love and redemption, "Gabriel's Inferno" is a captivating and wildly passionate tale of one man's escape from his own personal hell as he tries to earn the impossible...forgiveness and love.

Posted by Andi at 3:00 AM
Labels: giveaway