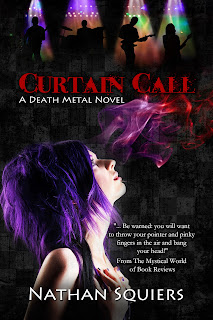 Curtain Call: A Death Metal Novel by Nathan Squiers
Book Blurb:
A promising career in the music industry was on the horizon for up-and-coming heavy metal band, Bloodtones. Even for their non-human members, this is the opportunity of a lifetime!

Yes, life was good… until it took a hellish turn.

After a bizarre encounter, Bloodtones' lead-singer Bekka finds herself sharing her body with a slew of terrified beings and in mortal danger from wraithlike forces capable of superhuman feats.

When fans can be otherworldly assassins and every mood-swing can end in an exploding amp, Bloodtones' rock-solid future is rapidly crumbling before their very eyes. What hope do the five have against a force that neither their magic or paranormal members can begin to explain? With no choice but to fight, Bekka and her band-mates soon find themselves struggling for not only their music…

… but their very lives. 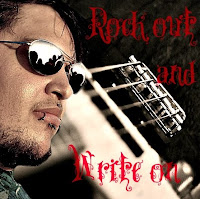 Born in Massachusetts in 1986, Nathan Squiers (The Literary Dark Prince) grew up in Andover, where his affinity for story-telling flourished due to a love of books and movies as well as an overactive imagination. At the age of 13, Nathan and his mother moved to Upstate New York to be closer to their family.

After surviving public school, where he spent most of his days locked away in the AV room watching old 80s movies on Laserdisc and planning out his next video project, Nathan began a shaky college career. A love of weaving tales and telling stories was motivation enough to pursue an education in English, and, as luck would have it, a series of phenomenal professors were available to get him pointed in the right direction. It was in his first years of college that Nathan began to actively pursue a writing career, starting his first literary journey with a piece that would later become "Noir", the first book of the Crimson Shadow series.

Like any good story, a chaotic turn of events brought Nathan from the very brink of insanity and loneliness to the warm, comforting embrace of Megan, his best friend, lover, kindred spirit, and--more often than not--personal handler. It was with Megan at his side that Nathan was able to continue his writing (sometimes solely motivated by the young lady's threats of dismemberment if he tried to stop). With Megan's help, Nathan was able to see Death Metal, his fourth manuscript, through the publication process.

Nearly ten years later, The Literary Dark Prince continues to invent stories and put them into a literary sequence that he hopes will be somehow decipherable by other readers. As a lover of all things creative, he works in both novels, novellas, short stories, as well as comic book scripts (just don't ask him to draw something if you don't like stick figures and poorly-executed shapes).

If he's not submerged in the realm of fiction or burning out his retinas with horror movie marathons, Nathan is planning/getting a new piercing/tattoo or enjoying life with his lovely fiancé.
Posted by Andi at 1:39 AM