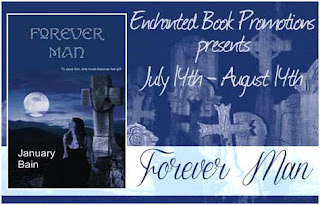 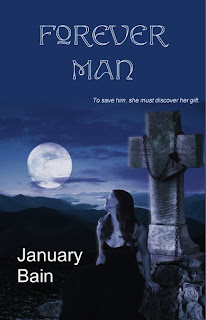 What if you had been given the gift of healing and could save those you loved? And furthermore, discovered you could save the one you love from a vampire’s kiss. There is a catch; of course, the cost of such a healing could mean your own death…

Ellie Hightower is discovering such gifts in the novel, Forever Man by January Bain. She is telepathic, young and bright and has been running from these new found gifts all the way to Nome, Alaska where she encounters the man of her dreams, Mike Stone and an ancient evil force out to take him away from her. Will having goodness and light on her side be enough to save them from Katrianna, a newly resurrected vampire that looks to enslave Mike in her nefarious web?

To find out the truth you will need to read, Forever Man, the first in the FOREVER SERIES by January Bain.
Read an Excerpt:

While I waited for her to return I looked out the window, admiring the view of snow-peaked mountains when I heard the screeching of brakes and a thud, then realized someone had hit a dog with a half ton truck right in front of the restaurant. The driver, a young woman in obvious distress, jumped out and cradled the animal’s head in her lap. In an instant I turned and rushed for the stairs, taking them two at a time.

As I reached the woman she looked up at me with stark pleading in her eyes. “I didn’t see him! Please, I need help!”

Crouching down beside them, I carefully laid my hands on the whimpering dog. It looked like a husky, probably a sled dog. He or she was still breathing, but it was labored and loud. I could also see blood on its soft white fur. My heart instantly melted and reached out to the poor creature with its pain-filled, whiskey-brown eyes that seemed to beg me to do something. Despite the gut-wrenching plea, I felt helpless, sheer happenstance had brought this poor animal to this end and I had no power to save it from its fate.

Hesitantly, I reached my hands out and laid them on the poor dog’s head and its eyes seemed to tell me that it knew its fate. Tears flowed and the image of the dog blurred. I felt its pain as my own as I closed my eyes in sheer anguish.

Please God, let this beautiful creature be okay. Suddenly, something came alive inside me like a dam bursting its banks, and a great tidal wave of energy flowed through me from my very core. It was so strong it made me shake and my legs, cramping in the crouch, almost gave way.

A surge of pure power seemed to drive through my hands into the dog as I concentrated my thoughts on it and then all I could see and feel was hot, white light surrounding me for a few brief incredibly thrilling seconds. The light blinded me, its power as strong as the noonday sun. A sense of pure aliveness electrified me, as if I was at the pinnacle of my strength and could rise up and fill the world with goodness and healing. Then, just as suddenly, the floodgates in my mind closed and the white hot  energy retreated back into my hands that began to shake violently with the excess energy.

The sensation left as abruptly as it had come and I fell back exhausted from the effort. The dog whimpered, shook itself and sat up. It looked at the two of us as if nothing had happened, its brown eyes shining and its tail wagging as if it didn’t even remember the last few minutes of its life.

The woman, her eyes huge in her round face, looked at me with complete wonder. “How could this be? One minute I thought it was dying, then you came along and now it’s up and fine? It doesn’t make any sense.” The woman shook her head, unwilling to believe her own eyes.

I knew exactly what she meant. Under the sense of complete exhaustion I was now aware of lurked the feeling that the world had slid sideways and then realigned itself in a new configuration.

Standing up, I felt immediately light-headed and woozy and stumbled forward from severe vertigo, catching myself from falling just in time.

“I don’t know—I guess it wasn’t—as hurt as you thought—it must have just been stunned.” I tried to put a sensible spin on recent events, my tongue feeling wooden and clumsy in my mouth. My slurred words made me sound drunk or slow I realized from a muddled distance, my voice echoing in my head.

“But didn’t you see the bright light just before the dog got up?” The woman was not to be deterred from her new sense of wonder.

I knew I had to get away, but an overwhelming sense of fatigue was slowing down my reaction time and was it was like being forced to move in deep, heavy water.

“Who are you?” The woman asked, her tone blunted by suspicion now.

My Thoughts:
Forever Man has a good premise to it. Ellie is desperately seeking a new life, which she finds in Nome, Alaska. She is fortunate enough to land a new job, new place to stay, and fast friends. It doesn't hurt that her new boss, Mike, is a hottie and that there is instant chemistry between the two of them. Could he be her Forever Man?
What Ellie doesn't know is that she is endowed with a special gift for healing. She has an inkling of her powers, but has never been educated on them, nor really experimented with them. She ends up with several opportunities to try them out in her new surroundings. She is put to the ultimate test when the evil Katrianna  shows up, with nothing but Mike on her mind.
Katrianna's true identity is more alluded to via descriptions as opposed to being stated outright. The reader knows full well who she really is and can deduce her plan, almost as soon as she shows up in Alaska. The mystery lies in precisely how she is going to carry out her evil deeds. A slight twist at the end may catch you a little off-guard. I would have loved a bit more of an explanation as to how it was possible.
This is the first book in the new Forever series. I would love to see more character development and have the story flesh out a bit more. Experiment some more with plot and the characters and this could turn into a really interesting series.
Buy links: Paperback | Kindle
About the author: 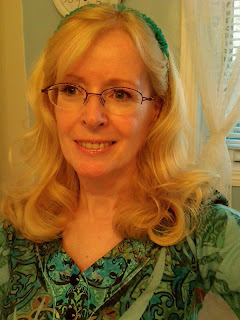 January Bain hails from Ashern, Manitoba,
Canada. Married to the love of her life, her
husband Don, she has combined her love of
romance with her interest in the paranormal
and vampires to produce the FOREVER SERIES
of books. She teaches English and Computer
courses during the day, and writes at night and
in very spare moment she has. She hopes to
touch your heart with this first book in the
series, Forever Man and would very much
enjoy hearing from her readers.
www.januarybain.ca