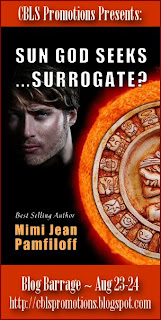 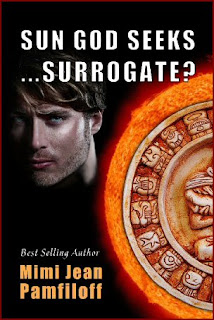 Sequel to ACCIDENTALLY IN LOVE WITH…A GOD? and The New York Times Best Seller,  ACCIDENTALLY MARRIED TO…A VAMPIRE?, this story has it all! Vampires, gods, and our favorite evil Mayan priests, the Maaskab.

BLURB:
When 24-year-old Penelope learns of a new miracle drug that could cure her ailing mother, it’s the answer to her prayers. Until she sees the cost. But for every door that closes, a window opens. In this case, the window calls herself Cimil, and she’s quite possibly the most insane person Penelope’s ever met. Could it be because this complete stranger just offered Penelope one million dollars to carry her

But Cimil’s brother isn’t your everyday millionaire. In fact, he gives new meaning to the word hot.


Wondering which screw in her head had come loose this time, twenty-four-year-old Emma Keane strapped a parachute to her back in preparation for yet another fun-filled jungle mission.

“Dammit! Stop wiggling!” she barked over her shoulder. “And that had better be your flashlight!”

Well, actually, it was a cranky, rather large warrior named Brutus strapped to her back and wearing the parachute because she had yet to find time for skydiving lessons.

In any case, looking like a ridiculous, oversized baby kangaroo wasn’t enough to stop her from making this
nocturnal leap into enemy territory—Maaskab territory. She had scores to settle.

Emma sucked in a deep breath, the roar of the plane’s large engines and Brutus’s growls making it difficult to find her center—the key to winning any battle. And not freak out.

Funny. If someone had told her a year ago that she’d end up here, an immortal demigoddess engaged to the
infamous God of Death and War, she would have said, “Christ! Yep! That toootally sounds about right.”

Why the hell not? She’d lived the first twenty-two years of her life with Guy—a nickname she’d given her
handsome god—obsessed with his seductive voice, a voice only she could hear. Turned out, after they finally met face-to-face, their connection ran blood deep. Universe deep, actually. A match made by fate.

Emma rubbed her hands together, summoning the divine power deep within her cells. One blast with her
fingertips and she could split a man right down the middle.

“Careful where you put those,” Guy said, cupping himself.

Emma gazed up at his smiling face and couldn’t help but admire the glorious, masculine view. Sigh. She knew she’d been born to love him, flaws—enormous ego and otherworldly bossiness—and all.

His smile melted away. “Please change your mind, my sweet. Stay on the plane, and let me do your fighting.”

“Can’t do that,” she replied. “The Maaskab took my grandmother, and I’m going to be the one to get her back. Even if I have to kill Tommaso to do it.”

Guy shook his head. “No. You are to let me deal with him.”

Emma felt her immortal blood boil. She’d trusted Tommaso once, and he’d betrayed her. Almost gotten her killed, too. But she’d known—well, she’d thought—it wasn’t Tommaso’s fault. He’d been injected with liquid black jade, an evil substance that could darken the heart of an angel. That’s why, after he’d been captured and mortally wounded, she’d begged the gods to cure him.

Then she did the unthinkable: she’d put her faith in him again.

He’d turned on her a second time, the bastard. Yes, his betrayal—done of his own free will—was her prize on that fateful night almost one year ago when her grandmother showed up on their doorstep in Italy, leading an army of evil Maaskab priests, her mind clearly poisoned.

“If Tommaso hadn’t helped her escape, we could’ve saved her,” she said purely to vent, because she really wanted to cry. But the fiancée of the God of Death and War didn’t cry. Especially in front of the hundred warriors riding shotgun on the plane tonight.

Okay, maybe one teeny tiny tear while no one’s looking.

“Do not give up hope, Emma.” Guy clutched her hand. “And do not forget…whatever happens, I love you. Until the last ray of sunlight. Until the last flicker of life inhabits this planet.”

Brutus groaned and rolled his eyes, clearly annoyed by the sappy chatter.

Emma elbowed him in the ribs. “Shush! And how can you, of all people, be uncomfortable with a little affection? Huh? You bunk with eight dudes every night. That’s gross by the way. Not the dude part. I’m cool with that. But eight, big, sweaty warriors all at once? Yuck. So don’t judge me because I’m into the one-man-at-a-time rule. That’s messed up, Brutus.”

In truth, Emma didn’t know what Brutus was into or how he and his elite team slept, but she loved teasing him. She figured that sooner or later she’d find the magic words to get Brutus to speak to her.

Accepting a temporary defeat, she shrugged and turned her attention back to the task at hand. She took one last look at her delicious male—seven feet of solid muscle with thick blue-black waves of hair and bronzed skin. Sigh. “Okay. I’m ready,” she declared boldly. “Let’s kill some Scabs and get my granny!”

She glanced over her other shoulder at Penelope, their newest family member. Her dark hair was pulled into a tight ponytail that accentuated the anger simmering in her dark green eyes. Pissed would be a serious understatement.

“You better believe it,” Penelope replied. “These clowns picked the wrong girl to mess with.”

Guy frowned as they leaped from the plane into the black night.

In real life, he’s an enigma. Maybe just a teensie jealous. Definitely overbearing. He’s also a voice only she can hear.

So who or what is he? He won’t say. But if she wants to be free, to be normal, Emma will have to trek to the jungles once ruled by the Mayans and find the forgotten ruin holding the answers.

However, the ruthless deity she’s about to unknowingly unleash on the modern world might not be so easily extracted from her life. Bottom line, he’s got enemies, and now, so does she.

BLURB:
“If you love her, set her free. If she comes back, she’s yours. If she doesn’t…Christ! Stubborn woman! Hunt her down, and bring her the hell back; she’s still yours according to vampire law.”--Niccolo DiConti, General of the

THE DETERMINED VAMPIRE: Niccolo DiConti has faithfully served as leader of Her Majesty’s army for over a millennium, but he’d rather sunbathe in the Sahara than spend another grueling day under his demented queen’s command. However, no one has ever left her side and lived to tell. So when a powerful goddess prophesies he will meet his salvation—a human woman he must turn into a vampire with her consent—he eagerly rises to the challenge. After all, how hard could it be to seduce a human female into taking the immortal plunge? Harder than he thinks. Because his mate won’t be born for another three centuries, and when he wakes up in the goddess’ tomb, not only is his life a mess, but his destined female isn’t about to settle for a coldhearted vampire. Can he win her over before it’s too late? Not if his enemies have anything to do with it.

AN UNWILLING BRIDE: On the night Helena Strauss meets the fierce, devastatingly handsome vampire who saves her life in the jungles of Mexico, she knows her world will be forever changed. Because an attraction this mind blowing only comes along once in a lifetime—or existence. And when he claims she is his one true mate, destined to be his for all eternity, it’s a fairytale come true. So what if her knight in shining armor is a vampire? Nobody’s perfect. But discovering the powerful, overbearing immortal doesn’t “do love”? Deal breaker. Helena will flee and set out to accomplish the impossible…sever the otherworldly bond between them. And it turns out, Helena is just the leverage Niccolo’s enemies need to break the mighty warrior and wipe out his people.

WARNING: This book contains sexual content (For some of you, not enough. I know. I’ll try harder, I promise.), adult language, hot men with unrealistically large physical characteristics, female whining (What? I whine all the time. It’s a healthy form of venting!), silliness, snark, sarcasm, and blatant abuse of the English language.

ABOUT THE AUTHOR:
Before taking up a permanent residence in the San Francisco Bay Area, Mimi spent time living near NYC
(became a shopaholic), in Mexico City (developed a taste for very spicy food), and Arizona (now hates jumping chollas, but pines for sherbet sunsets). Her love of pre-Hispanic culture, big cities, and romance inspires her to write when she’s not busy with kids, work, and life…or getting sucked into a juicy novel.

She hopes that someday, leather pants for men will make a big comeback and that her writing might make you laugh when you need it most.

Posted by Andi at 6:00 AM
Labels: Coffee Beans and Love Scenes, paranormal romance