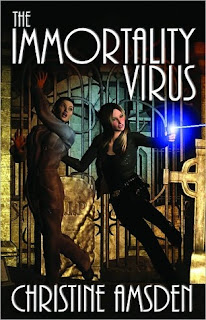 In the mid-21st century, the human race stopped aging. Those who know why aren't talking, and the few who are brave enough to ask questions tend to disappear. To an elite few, The Change means long life and health, but to the ever-increasing masses, it means starvation, desperation, and violence.

Four centuries after The Change, Grace Harper, a blacklisted P.I., sets off on a mission to find the man responsible for it all and solicit his help to undo The Change -- if he's still alive. To complicate matters, Grace's employer is suspected of murdering his father, and when the police learn of their connection, they give her a choice -- help them find the evidence they need to convict Matthew Stanton, or die. But if they discover Grace's true mission, they won't hesitate to kill her in order to preserve their shot at immortality.


“Check him for an ID chip,” McMillan said.

Grace checked both wrists, but didn’t find the tiny metal button that acted both as tag and as a neutral interface for portables. She also did not see any sign that such a chip had been ripped out of his skin by the same people who had stolen his clothing. This man had probably been born on the streets. “Nothing.”

“Good,” McMillan said. He subvocalized an instruction to his portable. It must have opened up a com link because a moment later he said, “Send a cleanup crew to my location beacon…no ID…10-4.”

“W-wait! Shouldn’t we find out what happened here? Someone murdered this man.”

McMillan actually laughed, a sound that infuriated Grace. He caught a glimpse of her face and the laughter died immediately. “Just like me. I bet I said all the same things my first day. It ain’t fair, is it?”

“So you’re just going to accept it? Accept a man being murdered in the middle of a crowd of witnesses? You’re going to accept not knowing his identity and not letting his family know he’s dead?”

“The cleanup crew will take fingerprints,” McMillan said. “The census gets almost everyone’s fingerprints. If they come up with a contact, they’ll let them know.”

“Then he’ll join the ranks of the nameless, faceless dead. C’mon, let’s go.”

It took her a moment to find her voice. When she did, her words dripped out like acid. “Would we have had time if he’d had an ID bracelet?”

“We would not have. We’d have called in the homicide team and they’d decide. Get in the car.”

This time, Grace complied, but she sat in stony silence as McMillan lifted off and began circling the area anew.

“It helps if you don’t think of them as human,” McMillan said after a while. “More than one officer has called this job pest control.”"

Science fiction isn't usually one of my favorite categories, but I decided to take a chance on this book. I did enjoy it. It was full of lots of action as Grace fought her way through the farms and tried to figure out who was a friend and who was a foe. Another aspect that intrigued me was the original cause of the immortality virus resulted from its creator trying to find a cure for the Alzheimer's that plagued his wife. Coming from a family that has suffered for generations from the disease, I can appreciate the desire to correct that flaw in the aging process.

The thought of living forever, though, is somewhat scary. This book shows some of the problems with that many people being on earth. People can't walk without being shoved up against someone else. There isn't enough food to feed everyone. They have created nutribars to maintain nutrients. And I love the Soylent Green reference.

The action keeps on going, up to the very end. And the end is just the beginning of a new chapter.

Christine Amsden has been writing science fiction and fantasy for as long as she can remember. She loves
to write and it is her dream that others will be inspired by this love and by her stories. Speculative fiction is fun, magical, and imaginative but great speculative fiction is about real people defining themselves through extraordinary situations. Christine writes primarily about people and it is in this way that she strives to make science fiction and fantasy meaningful for everyone.

At the age of 16, Christine was diagnosed with Stargardt’s Disease, a condition that affects the retina and causes a loss of central vision. She is now legally blind, but has not let this slow her down or get in the way of her dreams.

When she's not writing, Christine teaches workshops on writing, usually at Savvy Authors. She also offers professional editing services. She maintains a book review blog on her website with occasional writing tips thrown in for the fun of it.

Christine lives in the Kansas City area with her husband and two children.