'Heart of the Ozarks' Book Review and Giveaway 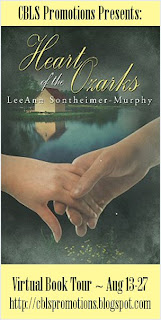 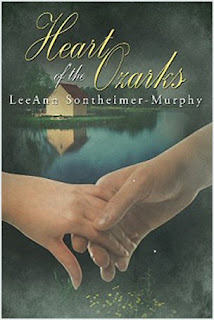 After St. Louis TV weathercaster Cole Celinksi loses his almost estranged wife and three children in a car crash, his boss orders him to take a leave of absence. Against his will, Cole leaves the city in late May to find the rest and relaxation everyone else thinks he needs. Without anywhere else to go, Cole heads for Lake Dreams, a resort on the quiet side of Lake Taneycomo in the Ozarks he visited each summer as a child with his grandparents. Some of his best memories were made in the lakeside vacation haven with his summer friend, Maggie. Upon his arrival, Cole learns Maggie now runs the place. Twenty years have passed but  from the minute he returns, they reconnect and soon their mutual attraction ignites. He fishes in the lake, takes Maggie to visit some of the places he remembers and begins to find out who he truly is. Before he can heal, he must learn to deal with his loss and to see if he can create a new family with Maggie and her children. It’s a task he’s not sure he can handle but if he wants to be with Maggie, he must. A near tragedy brings them all together into a close knit unit and afterward, Cole may be able to make his dreams reality.


Maggie took three steps forward until she stood in front of him and put one hand on his chest. She stared at him for a moment stretching out long and then stood on tip-toe to kiss his mouth, very gentle and soft. It wasn’t a lover’s kiss, not quite, but intimate and Cole’s reaction surged through his body with a rush. Her mouth’s brief caress whispered affection and familiarity.

“Go get changed,” she said, “We’re not fancy at Dove Chapel but shorts won’t do. I’ll come pick you up in a half hour, okay?”

When she rolled to a stop beneath the cabin’s porch, he hurried down, wearing the single pair of Dockers he’d brought along with a button-down shirt. Maggie smiled, dressed now in an attractive navy blue and white print dress, hose, and dark blue heels. She’d also put on more make-up than he’d seen her wear yet and tamed her hair into a bun on the back of her head, held in place with a plastic clip.

“You look lovely,” Cole said, his eyes drinking in her beauty.

“Thanks,” she laughed, “Don’t turn my head or I’ll get nervous.”

She drove around the winding curves along the back roads to the old church, handling the car with skill. They didn’t talk much but she sometimes broke into song, practicing he guessed. Cole realized he’d never ridden with Maggie at the wheel before. He recalled during the last summer he spent here driving Pop’s Impala with Maggie riding shotgun to Dove Chapel.

When the church came into view Cole’s chest tightened with sudden anxiety. Too late to turn back, now he wasn’t sure he should have come. He offered up his first prayer in a very long time and begged God no one be present from St. Louis.

“Will people ask who I am?” he said as they climbed out of the car.

“Probably,” Maggie replied, “And everyone will stare at you and be nosy.”

His heart slowed and his stomach clenched. “Tell me you’re kidding.”

If he hadn’t wanted to hear her sing and watch, he’d gone back to the car but he sighed instead. “All right, I’ll try to be on my best behavior.”

They settled into a pew midway down the right side of the aisle. As Cole looked around the once familiar church, he could almost believe he’d been transported back to Mayberry or to a sound stage somewhere. The humble country church appeared to date to the early 19th century and he figured it probably did. Before he could analyze his thoughts further, a couple in their sixties appeared and greeted Maggie.

Cole cringed and restrained from ducking his head like a bashful child as Maggie rested one hand on his knee and said, “This is Cole Celinksi, an old friend. He used to spend his summers at the resort when we were kids. Cole, this is Irene Matthews and her husband, Tom. They used to own a little motel over on the other side of Taneycomo, where Branson Landing is now.”

“Hi,” Cole said, extending his hand in greeting. “It’s nice to meet you.”

He repeated the phrase for the next ten minutes until the service began and everyone settled into place for worship. Maggie remained in the pew through the opening song but then she headed up front. Cole watched, awestruck, as she stood in front of the upright piano and clasped her hands. From the rear of the church, someone struck up guitar chords for the melody and she sang in a clear, full voice. The sound of it filled the little old church and resounded around the room. For Cole, it seemed as if she sang to him alone. Her eyes never left his face as she trilled out the lively song and as the message tucked within the music penetrated his heart, tears trailed down his cheeks, slow and steady.

Until then, he’d never realized how angry he’d been with a god who allowed his kids to die or how high a wall he’d erected around his faith to hide it. Listening to Maggie’s pure voice, he realized God sent joy to his people, a joy to dance about even when the devil’s on your back. He’d shut himself off from joy and wallowed in sorrow. In her voice, he heard echoes of his children’s laughter and Cole moved his lips, singing along with Maggie without sound. As soon as she finished, she came to the pew and slid in beside him.

Cole reached out and squeezed her hand, speechless with emotion. As the pastor took the pulpit and began to preach, Maggie handed him a tissue from her purse and whispered, “Are you okay?”

He nodded, mopping away his tears. “I’m good, Maggie. Your song touched me.”

Maggie slipped her arm through his and leaned against him. Her whisper came like a breath of wind, for his ears only, “I’m glad.”

Although the sermon lasted a full thirty minutes and the volume increased, Cole didn’t hear a word of it. His mind reflected on the song but his awareness of Maggie beside him increased until he thought of nothing else but her and where their friendship might go from this point.

Her soft perfume permeated his nose and beneath it he could smell her lavender shampoo. Each breath she drew he felt and when the congregation joined in song, her voice matched his. Since he came to Branson, Cole’d known several quiet moments with Maggie but this one eased his inner turmoil in a different, more powerful way.

The thought struck him he belonged with Maggie and maybe he’d find his way home with her help.

He liked it almost enough to forget the idea scared the hell out of him.

Cole is a mess, having lost his wife and three kids. He begins to feel rejuvenated as as he catches back up with Maggie, the one who had gotten away when they were kids. She is his true other half. She is also a widow and has two kids. The odds of these two lost loves reuniting is high, though both being available due to death is a random coincidence. Perhaps the fates meant it to be that way. They had both suffered unimaginable loss, even though they were estranged from their partners. No one else could quite understand it the way that they do.

I felt like their relationship got too heavy too fast in some respects. At the same time, they were old flames that never died out. Cole is more mourning the loss of his children as opposed to a lost companion. Maggie and Cole fit together like two pieces of a puzzle, so their connection was to be expected.

The story focuses a lot on the two of them rediscovering each other. There are a few instances where Cole is reflecting on what he has lost. In some ways, I would have liked to have read more of that, though it could have taken away from the romance aspect of the novel.

Instead of dwelling on every minute detail, I appreciated how Lee Ann would skim over several days with a summary, to show the passage of time. I did feel like a lot of it was predictable, but it still helped to pass time during a very long car ride.

AVAILABLE AT:
Amazon - B&N - ARe - Bookstrand 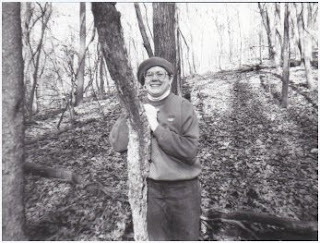 ABOUT THE AUTHOR:
Lee Ann Sontheimer Murphy is a full-time romance author. A native of the old historic city of St. Joseph, Missouri, one time home to both Jesse James and the Pony Express, she now lives and writes in the beautiful Missouri Ozark region. Her romance novels include Love Never Fails, Witness Protection Program, Sing We Now of Christmas, A Patient Heart, In Love’s Own Time, Miss Good Samaritan, In The Shadow of War, Guy’s Angel, and Heart of the Ozarks, all from Rebel Ink Press. She also has six other novels and several novellas available. Her work also appears in more than twenty anthologies and she has multiple short story/non-fiction credits.

She is a member of RWA, Missouri Writers Guild, EPIC, and the Ozarks Writers League. Her work also appears in multiple anthologies. She earned a BA degree in both English and History from Missouri  Southern State University as well as an AA Degree in Journalism from Crowder College. She worked in broadcast media for a decade and also has a background in education. Her weekly column “Hindsight” appears each week in the Neosho Daily News.

She is married to Roy W. Murphy and the couple has three children, Emily, Megan, and Patrick Murphy.

If Lee Ann – or Lee as many of her writing friends know her – isn’t writing, she’s reading or spending time outdoors.

In Neosho, Missouri, the small town she now calls home, she serves on the local library board, is active in the annual Relay For Life fight against cancer, has worked with the local Arts Council, and is active in her parish.