'The Boss and Her Billionaire' Book Barrage and Giveaway 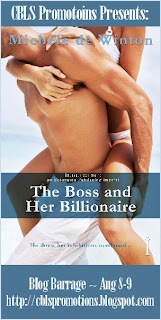 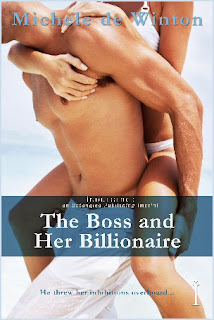 Title: The Boss and Her Billionaire

Cruise director Michaela Western has everything she wants—everything except a sex life. But there are no secrets on cruise ships. She risked her job once for a dalliance with the Captain, and won’t do it again for a few minutes of toe-curling pleasure. Until a devilishly handsome new staffer with a body made for sin tempts her to walk on the wild side...

Investment billionaire Dylan Johns always gets what he wants. He is used to giving orders—not taking them—until he’s forced to go on hiatus from his investment company. To bide his time and carry out an old dream, he takes a job on a cruise ship—and ends up taking orders from his gorgeous, but uptight, new boss. He is determined to loosen her up with a fun onboard romance, but their no-strings fling turns serious and Dylan is forced to confess his lies.

When the affair threatens to shatter Michaela’s own career dreams, she finds herself caught between the devil and the deep blue sea.

“Okay then, bandmaster. Take us away,” George called and sat back in his seat.

The band started up, a soaring number with orchestral strings and a fabulous cello part played on the bandmaster’s keyboard. Her heart was swept up with the incredible music to a point somewhere close to the center of the high-arched theater ceiling. Her head swayed, and she wanted nothing more than to be pulled up into someone’s arms and swung around the stage. Someone with a broad chest at the perfect height for her to rest her head on. Someone just like Dylan Johns.

The stage began to brighten, and in among the props Michaela discerned the smallest amount of movement. “Oh,” she gasped. Two statues were actually people, painted white and now moving through the set.

“You like?” George’s grin flashed brightly even in the dimmed light of the audience. “That Dylan makes a better statue than anything made of stone,” he whispered.

“The bastard,” Felicity hissed. “Saying that a woman couldn’t do your job. As if he would do any better—he needs a staff of ten to make sure he doesn’t forget anything.”

Michaela smiled. Oh, it was good to smile.

“And the captain said it’s Dylan who’s been telling tall tales? The bloody cheek! I’ll have that man on toast.”

“You fox!” Felicity’s delight was immediate. “Was he scrumptious?”

“Oh, God!” Michaela’s heart dropped again at the thought of the gossip that was even now whirling around the ship. “Everyone’s been saying I seduced him. That I used my position to take advantage.”

“And I bet it was him that snared you, wasn’t it? The toad, trying to look squeaky clean.” Felicity switched from triumphant sex-gossip to compassionate friend in a heartbeat. “What’s he trying to prove, that he’s hot enough to score cruise director for starters and then have dessert of those dancing twins? Just wait until I get hold of him.”

“Like I said, I don’t do holidays. If I’d had to sit around and read a book for this long, I already would have gone crazy.”

Dylan smiled at her, a coronary-inducing, thigh-quivering smile. She wanted to throw herself at him, but he stood up. “So, ready for some fun?”

He’d said it again. Fun. Of course. For a moment, she thought he was going to say something different. That there might be something more between them than a bit of fun. But no, fun was just what she needed. At least for now.

“Can we start again?” she asked.

Dylan’s smile was delicious—the green of both ocean and forest in his eyes, and the heat in their depths sparkled. “To fun?” he asked and held out his hand.

“Fun,” she said, taking it, her heart racing.

“Now, about that snorkeling,” he said. “Race you to change?”

Michaela wondered at what his definition of fun might be. As she changed into her pale blue bikini in the luxurious bathroom, her skin tingled, and when she emerged she felt Dylan’s gaze as if his eyes had physically stroked her.

“I ate this book up, just could not turn my kindle off! The story cleverly eschews the romance novel formula by having the female lead in the position of power as the cruise director...and the hunky male lead is a dancer. I particularly enjoyed the dance scenes - the rehearsals, description of performances and interplay between dancers. Often i find the support characters are barely sketched in other romance novels but in this story they are fully fleshed, interesting and often hilarious. And the chemistry between the leads bursts off the page - they're hot! Move over Love Boat...this has made me want to go on a cruise!”- Megan Beard, Amazon review

"Better than the love boat. Yep, it's a big call but I think Michaela Western makes a better Cruise Director than Lauren Tewes. More smarts, more sass, and more self respect. Eventually anyway. I really liked it. I wasn't sure I was going to, because I didn't know how having the hero go from Investment banker to dancer was going to play out, but it works. Really works. I loved Dylan, and the sex scenes were hot. If this is a debut I'm looking forward to the next one." – Jess, Amazon review

“I loved this book! It has a great premise, being set on a cruise ship in the middle of the pacific, and it breaks some of the usual boring 'rules' of romance by having a sexy dancer as the male lead, and his boss as the heroine. The chemistry sizzled, and I really got into the characters. It kept me up reading into the small hours, and I had work the next day, but it was worth it! Even the side characters worked for me. The banter between Michaela and her friend Felicity cracked me up - which is something I'm always looking for. For a debut, this is an especially good one. Looking forward for more from this writer.” - Trudi Jaye, Amazon review

My thoughts:
This is the kind of a sizzling story that makes for the perfect beach read. A sexy Australian man who is willing to satisfy every desire of the woman he desires? Yes, please!

Finding your own billionaire is completely a fantasy for most women, yet the way this is written, it seems almost plausible. Michaela is down-to-earth and independent. She knows what she wants and what is right. Dylan may be rich and gorgeous, but doesn't play that up in an obnoxious way. Money is just a part of his life. He is beautifully torn between dedication to his family and a desire to fulfill his dreams. He only thinks he knows what all of those dreams are. It's up to Michaela to help him discover the rest of them, and vice versa.

This steamy read will keep you up late and the pages will keep flying. I managed to polish it off in one evening. I look forward to more work by this new author! 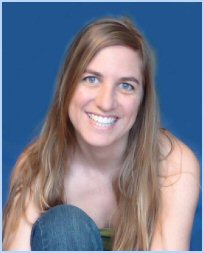 Michele was born in the mid 1970’s amid a burgeoning sprawl of vineyards and new retirement homes. Despite training in law (or perhaps because of it) she has been a dancer, producer, writer, and all round arty type in  various countries for most of her life. Now back home in New Zealand after travelling a plenty, she is a mom to one and writes full time in an office surrounded by whispering trees.

You can find Michele on:
Facebook http://www.facebook.com/michele.dewinton
Twitter https://twitter.com/MicheledeWinton
Post a comment on her blog http://micheledewinton.blogspot.co.nz/
Drop her a line through http://www.micheledewinton.com
She also blogs at The Naked Hero as The Luna goddess: http://www.thenakedhero.com
And on the Indulgence blog: http://entangledindulgence.wordpress.com/

Posted by Andi at 3:00 AM
Labels: Coffee Beans and Love Scenes