Guest post from Shirley Ann Wilder, author of 'Too Many Cooks' and giveaway 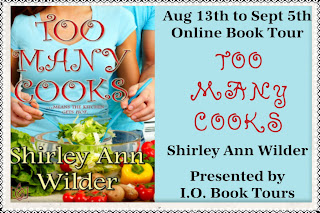 Today's guest post comes from Shirley Ann Wilder, author of Too Many Cooks.

The First Line of my Novel – Where did it Come From?
Probably the most important sentence in a book is the first line. And perhaps equally important is the last line—depending on whether it’s a transition or a real “hook” that will grab your reader or at least keep them questioning what comes next? Honestly, coming up with a first line of “Too Many Cooks” was not as easy as it may appear.
I knew what I wanted the scene to include, but there were several ways of getting there. At the first writing, I tended to be a bit on the vague side of what the main character was overhearing. Then my critique group had the opinion that being too vague would only confuse the reader and they felt I should nail down exactly why the medical professional was having the phone conversation and whom it was about.
That didn’t sit well with my inner instincts, but I thought they had a point. Anyway, after several rewrites and changes, I compromised. Lucky for me, my editor, Chris Keeslar, was able to help me adapt the first line just enough to offer up questions for the reader and at the same time, convey the fact that Estelle is over-­reacting and is emotional due to recent events in her life.
In Romance novels, the last line has to wrap up the “happily ever after.” Everything has to be solved and there shouldn’t be any questions left unanswered. The exception to this, I suppose, would be if the book was the first of a series and then of course, you might want to dangle something for the reader to encourage them to seek out the second book.
Probably one of the best first lines I’ve ever read belongs to a fellow author, R. Ann Siracusa’s, first novel. It’s not a Romance, but one of the best books I’ve read in a long time, set in post WWII Sicily. She begins the Prologue with this: It was an inconvenient time and place for her to die.
Who could not be fascinated by that bombshell? It was a powerful beginning to a powerful book. I have used that as a benchmark to a goal I hope to achieve in my writing; a first line that knocks your socks off and leaves the reader begging for more.
While the first line is important, the body of the book has to keep the reader interested and invested in the characters. They have to root for the heroine and hero. If the author is able to achieve that standard and meet those goals, the book most likely will be well received.
That is the hope of writers worldwide.

From the time she could hold a pencil, Shirley Ann Wilder wrote stories. Being the youngest of six children, she was overlooked many times but found wonder and magic in reading books. As a youngster she was especially fond of horse books and read every one of Walter Farley’s Black Stallion books.

That passion for horses carried over into her adult life and with her husband and four children, raised Quarter Horses and German Shepherds. Shirley’s other passion was writing, but it was put on hold until the three sons and one daughter were in high school.

After developing a severe allergy to the equine species and having to give up the major part of horse involvement, Shirley wrote a weekly column for a community newspaper and a monthly column entitled “On the Wilder Side” for the California Horseman’s News in the which she recounted the humorous episodes that happened during the Wilder Family’s horse era. Shirley also published in college literary magazines, but her real quest was to write novels.

After taking numerous writing classes and amassing many unfinished manuscripts, one of her writing instructors suggested she join Romance Writers of America. Taking that advice she also joined the local San Diego RWA chapter has since completed six novels. She served on the Executive Board as Co-President of RWA- San Diego for 2006 and 2007 and held several other chair positions. She credits her fellow writers for the support and encouragement that has kept her writing during recent difficult times.

Shirley Ann was widowed in January of 2008 when her husband died of stage four colon cancer after battling it bravely for three years and four months. Three of her grown children live near her in suburbs of San Diego and one son lives in Kentucky. They have blessed her with four granddaughters and one grandson.

Since her husband’s death, Shirley has become an advocate for colonoscopies and is currently working on a non-fiction book about the grieving process and all one encounters when suffering the loss of a mate. “John was my hero and I will miss him forever, but he always encouraged me to keep writing and to stay strong.” 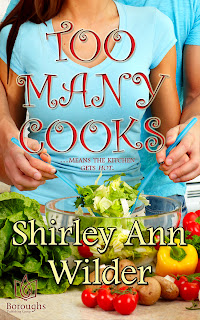 Book Blurb:
Bitter news leads a San Diego widow and widower to true love—and to a scheme to marry off their adult children, a plan that goes deliciously awry.

Gaetano Lorenzo was the sweetest man that the widowed Estelle Bennett had ever met. That morning began terribly, with awful news, but now the owner and head chef of a local San Diego ristorante was offering up Italian delights: red wine, delicious food, walks on the beach, laughter when she’d never thought she’d laugh again…. Estelle felt twenty-five. She and Gaetano had found the recipe for love, and a simple variation might just get their adult children to settle down, too. A scoop of sugar, two ladlefuls of lust, a pinch of deception and a whole 24 oz.-can of danger—Suddenly, ingredients were coming from everywhere! But kitchens are crazy places, and variety is the spice of life. And for anything to get cooked, things have to get hot.