Get to know Robert B. Lowe, author of 'Divine Fury' 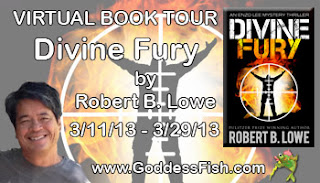 Today, I would like to welcome author Robert B. Lowe to the blog. He has quite an interesting past, as well as character in his latest book Divine Fury!

I wanted to focus on San Francisco and something unique about the area. Somewhat by chance, I thought about the gay and lesbian culture here and how that has been a big part of the area for decades. Harvey Milk, of course, is part of SF history. Also, it seems plausible that a gay candidate from here would seek statewide or national office and receive push back from some circles. That was the seed of the plot.

'Divine Fury' is the second book in the series. How many more do you anticipate?
I’m working on the third one. I suspect there will be more but I may take a break for a book or two.

What is it about reporter Enzo Lee that is so captivating?I try to keep him as a relative normal-guy hero. He gets bruised when he falls down and is never a bet to beat up someone bigger and tougher than he is. He’s sort of a blend of smart, urban professional guy but with some blue-collar softball-beer-and-pizza-with-the guys tendencies, too. He’s not looking to be a hero but he’s the guy who will reach out and grab someone before they get hit by a bus.

What kind of research do you need to do when crafting a political thriller such as this one?
I have an unbalanced army vet in the plot and I read about Timothy McVeigh, the Oklahoma City bomber, the book about the army sniper who was recently killed, studies of the Black Hawk Down incident in Somalia and conservative anti-government groups to get a handle on him. I also get details on types of weapons, visit places in the book to get accurate descriptions and even consult menus at restaurants to describe the food.

Congratulations on winning the Pulitzer Prize. Please tell us more about that.I won it with a partner for investigating the sports program at the University of Arizona. We found a lot of skullduggery and misuse of public funds. A lot of people were fired and indicted. We took on a very powerful institution in Tucson and withstood a great deal of pressure, some of it coming down from our own newspaper. It was a small-town version of Watergate in a way and I think why we got it.

What was one of your other most memorable stories from your days as an investigative reporter?

Also in Arizona, I investigated a story in a rural county about doctors and other county officials who were requiring poor mothers to agree to be sterilized to have their babies delivered there. Sometimes they were pressured to agree to this while they were in labor. Some of the Spanish-speaking nurses who had to apply the pressure said it was an effort to reduce welfare costs. We spent weeks in 100+ degree weather finding victims in these small rural towns. Ultimately, we stopped the practice. I learned a lot about how power gets abused in small towns.

What are some of the positives and negatives of being an investigative reporter? Would you ever return to that career?

Just being a reporter is enjoyable in many ways. You meet many different types of people, most of whom are interesting or remarkable in some way or you wouldn’t be interviewing them. You see parts of a community – such as the very wealthy and very poor – you probably wouldn’t see otherwise. But the investigative work is hard slogging. It talks a long time and often you don’t know if you’ve got a story until the end when you confront the “bad guy.” Maybe he has a pretty darned good explanation. I could see perhaps doing some non-fiction work that uses investigative techniques. My first book, Project Moses, focused on genetically modified food and crops. My book now in progress looks at the Big Pharma drug industry. There is plenty to expose in a non-fiction work in those areas.

You cite a long list of mystery novels and writers as having shaped your lifelong reading habits. Who is currently on your reading shelf?

I’ve recently read some Anne Patchett who is inspiring in her ability to create wonderful characters. I’m reading A Beautiful Mind by Silvia Nascar because I have a character with mental problems in the next book and I’m looking for ways to portray him. I recently read Jon Meacham’s biography of Thomas Jefferson which I didn’t think was his best effort but Jefferson’s a pretty fascinating guy.

You are a self-proclaimed food snob. What are some of your best recommendations, particularly in the San Francisco area?

Well, in Divine Fury, I have a scene at Fringale which is a country-style French restaurant somewhat out of the way in the South of Market area. Particularly for lunch, it is amazingly reasonable and the food is great. There is a wonderful dim sum restaurant called Yank Sing which is in the Rincon Center in downtown SF. They have an amazing selection including vegetarian dishes. I’m taking my college-aged daughter to Green’s for lunch as I write this. She’s a vegetarian but I’m clearly not and always have a great meal there. There are always dishes you’ll never have anywhere else. It also looks out over a marina so has a great view on a clear day.

What is something readers may be surprised to learn about you?I’m something of a serial career changer having moved through journalism, law, high-tech business and, now, novelist. Along the way, I looked at being a private detective, interviewed to be a private-injury lawyer (ambulance chaser really), worked two days as a business broker before quitting, and came close to buying some auto smog-test stations. I also got fired from a job picking grapes in France.
Anything else you would like to add?

Just thanks for taking the time to find out some of my background and what my books are about in preparation for this. 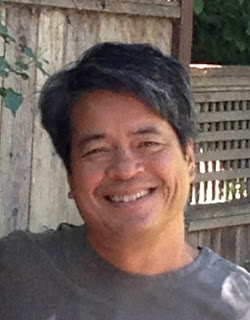 Robert B. Lowe is a Pulitzer-prize winning author whose fiction is based in San Francisco, his adopted home.
His past experiences – a 12-year career in investigative journalism and a Harvard Law School degree – enable him to write gripping mystery thrillers in both the legal and journalistic fields. Lowe draws his inspiration from John Grisham, Dick Francis and Lee Child and adds his own San Francisco twist. Readers will enjoy his references to the city’s landmarks such as Chinatown, North Beach and Pacific Heights  and the Bay area’s foodie culture.
Divine Fury is Lowe’s second novel. His first was the best-selling Project Moses which reached the Amazon Top 20 Mysteries list and was a finalist in the Best Indie Books of 2012 competition hosted by the Kindle Book Review.
Divine Fury continues the adventures of Enzo Lee, a jaded journalist rehabilitating his career as a feature writer in San Francisco who stumbles into scandals and criminal conspiracies that require his investigative expertise to unravel.
When Lowe isn’t writing he enjoys a day at the golf course and spending time with his wife and daughters.
LINKS: 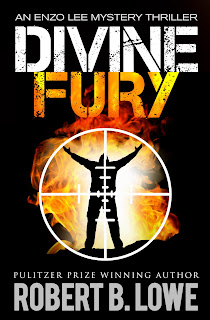 DIVINE FURY
By
Robert B. Lowe

Candidate Andrew Harper was a college basketball star, a crusading prosecutor and a beloved Congressman. He is also openly gay. When the San Francisco politician gets the inside track to become California’s next governor, it sends shockwaves through the political and religious establishment.

Reporter Enzo Lee is cajoled into leaving his comfortable niche covering fluffy features for the San Francisco News to cover the historic campaign. A series of campaign events are mysteriously and dangerously disrupted. A key endorsement is scuttled at the last minute. An earlier murder takes on new significance when it is linked to a Watergate-style break-in involving computer spying.

But, finding the culprits behind political sabotage and high-tech hacking take a back seat when it’s discovered that a troubled war veteran armed with guns and explosives has begun a violent journey from small-town Montana to the City by the Bay.

When Lee becomes a target himself he must dodge attempts on his own life while trying to expose the conspiracy and, with the help of police allies, foil an assassination plot.
Divine Fury is the newly released second book in the Enzo Lee series from Pulitzer Prize-winning author Robert B. Lowe. The series was kicked off by the best-selling ProjectMoses, the bioterroism thriller that made the Amazon Top 20 Mysteries list and was a finalist in the Best Indie Books of 2012 competition.

Divine Fury is a page-turning thriller with suspense, action, romance and enough twists to keep the reader guessing.  It also focuses on a timely theme as the issues of same-sex marriage and gay rights become a major cultural battleground in America.

Lee saw the bright flash from the other side of the street an instant before he felt more than heard the boom of the explosion that tore through the bank of newspaper boxes and sent out a shock wave that shattered windows halfway up the office building behind. He saw a plume of smoke from across Market and heard the sound of glass breaking and falling, accompanied by the screams.

The first ones were screams of shock, surprise and fear by people around him. Two seconds later, he could hear people hurt and maimed howling in agony and those around them shouting for help.

Everyone was staring at the bomb site as the smoke continued to rise and the sound of glass hitting the pavement seemed to go on forever. Lee was staring in that direction as well when he saw Walberg. His face was streaked with black paint but Lee still recognized him. Walberg was climbing over the barrier. When he reached the other side, he reached into his coat, pulled out a gun and started walking toward the yellow Cadillac.

Lee pushed through the people in front of him and jumped the barrier. He started after Walberg. He saw Connors standing up in the Caddy next to Harper with one hand on his chest, holding him where he was seated. Like everyone else, she was staring in the direction of the bomb site.

“Bobbie!” yelled Lee, trying to get her attention. “Bobbie!” There was too much commotion . Too much noise. He couldn’t get her to look his way. Desperate, he reached into his pocket, found his cell phone and threw it at the Cadillac. Then, he sprinted after Walberg.

Robert will be awarding a $25 Amazon Gift Card to a randomly drawn commenter during the tour. Follow the tour for more chances to win!
Posted by Andi at 3:30 AM