Review of 'Praying for Daylight' by J.C. Isabella 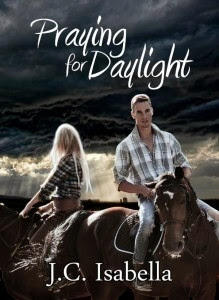 Kate Kelly gave up everything to be a star. Her life was on the fast track as country music’s hot newcomer, but that meant leaving her hometown of McCree, Montana and the boy she loved behind.

Dustin O’Brian didn’t think he’d ever see Kate again. After leaving him with a gaping hole in his heart, he figured being in the same room with her, much less the same state, would take a miracle.

When he finds Kate hiding out in the old Kelly house, he realizes something went wrong. Dustin wasn’t sure what those Hollywood folks had done to send her running, but he was beyond happy she’d sought him out for company…once he convinced her that he’d keep her being back in McCree secret.

Things were looking up, and he had high hopes that Kate would be his once more.

That is until Death comes knocking at her door.

And Dustin realizes that the future he wants with Kate is one they will have to fight for.

“And the winner is…Kate Kelly!”

The roar in my ears was almost too much to bear. I dropped my beaded clutch, stumbled, nearly fell face first into the lap of a famous director sitting beside me, but I made it. I made it all the way up the shining, gold stairs, all the way to the clear glass podium. I barely registered the tall blonde woman handing me my first award.

I thought about everything that brought me to this point, and my stomach rolled in nervous excitement.

Kaitlin Kelly, a little nobody from a small town, McCree, Montana.

I was being honored as hot new artist of the year.

I eyed the microphone, which was just a little high for me, and stood as tall as I could in my cowgirl boots. They were baby blue with silver stitching, and matched my short white ruffled dress perfectly.

“Uh, wow,” I gasped, squinting through the bright lights of the stage. “I can’t believe this. I feel so happy, and blessed. And I didn’t even write a speech because I never thought I’d win…and I know I have so many people to thank, but I just can’t remember their names! So, thank you…uh, to my manager Jake, my sister—Cheyenne, you don’t know how much…what you have done means to me. I love you. You’re my best friend. Uh, and I’d like to thank my manager Jake. I couldn’t have done this without you. And I…I just love everyone, and I think I’m starting to make a fool out of myself…” I felt a clammy hand on my arm and glanced back at the blonde woman. Music started to play. I had to wrap this up. “Uh, so thanks to everyone. I love you all!”

And I was whisked backstage. Lights flashed as cameras snapped. I posed this way, that way, stuck out my leg like I was taught. I held up my award, bursting with pride.

I made music and toured the country with other stars. Life was more than I could ever ask for. I was having a blast.

Who’d have thought that I would spend my senior year of high school on the road, getting to hang out with some of country music’s brightest stars?

I was one of them now. I had my award and congratulations at the after party. So many people peppered me with questions about my second album and what I had planned for it.

To be honest, I was so caught up in everything else, I really hadn’t put much thought to it. Once I had some down time, I’d have to think about what I was going to do.

“Honey, you were amazing!” my sister said, hugging me later that night at the after party. She was older than me by about ten years, and she had a son, Ben. I didn’t think she’d go for me having a music career, but she supported me every step of the way. Some people thought my sister took advantage of me, by exploiting me when I was only sixteen. But it was my idea. I wanted this more than anything in the world. I had to convince her.

Not that she didn’t benefit. My rise to fame brought attention to her talent as an interior designer, and now she was in talks for her own TV show on the home improvement channel.

An arm came around me and I was swept off my feet in a crushing hug. Jake, my manager, nodded. “You’re a star.”

I smiled. “Thanks guys, I couldn’t have done this without you.”

“Oh, after this, we should all go eat hamburgers in our gowns like the other famous people!” Cheyenne grinned with excitement, and I watched Jake share the giddiness with her.

“So.” I looked up at Jake when my sister was snatched by a singer looking to revamp her kitchen. “Any progress?”

Jake shook his big blond head. “No, I’m being a chicken.”

I glanced at the crowd gathered on the rooftop of a swanky hotel. It was full of the elite, and I almost felt out of place. “You can get any one of the girls here, so why can’t you just ask out my sister? I mean, I’m planning a wedding in my head here. Ben loves you…it’s like, perfect.”

“I know. I don’t want to screw this up. I mean, it’s Cheyenne. She’s gorgeous and smart, and she smells like sugar cookies.”

I rolled my eyes. Never would I have thought big, tough Jake Parsons, would revert to his teenage ego at the thought of approaching my sister for a date. “Why don’t you tell her you love her and pop the question?”

He blanched. “I haven’t kissed her, and I’m going to ask her to marry me?”

“You know you want to…” I smirked.

“Yeah, but I can’t just get down on bended knee and give her the ring.”

“Wait, you have a ring?” I nearly dropped my drink. Holy Lord. My sister was just as crazy about him, so I was going to have to do something to end the insanity. It’d been like this for a year now. She was constantly wondering if he’d date her, and if ben would like him for a stepfather. Jake was pestering me daily about her favorite colors, flowers, and whether or not he could be a dad to Ben.

I lowered my voice, “Uh, where did you get a ring?”

He blushed. Like, actually blushed! “It belonged to my aunt. It’s a family heirloom.”

“Oh my god! Cheyenne is going to love that!”

“Really?” His chest puffed up.

“You know how she is about mass-produced stuff. She loves things with meaning.”

“Great…but it still doesn’t help that we haven’t been on a date yet.”

“How about you come over tomorrow?” I had it all worked out in seconds. My plan would go perfectly. He’d come over, I’d make up a sudden excuse to leave and take Ben with me. “Tomorrow is pancake night. Eat with us, and then you ask my sister out, or I’m doing it for you.”

He nodded. “Right, pancakes. Should I bring a bottle of wine?”

“Red or white?” He wasn’t hearing me. “Maybe flowers?"

“Unbelievable.” I stood on my tiptoes and locked eyes with him. “Bring chocolate milk.”

“Yes, the kind with chocolate in it.” I rolled my eyes, heading to grab sparkly water from the bar. He’d figure it out, or I’d ambush him in the front yard tomorrow, snag his wine, and hand him a bottle of Ben’s favorite milk.

I have read JC Isobella's other books about McCree, so I was happy to join the book blog tour for this title, as well. Praying for Daylight features many of the characters that have been in the other books, which is always nice to see in a series that features different characters' stories.

Kate Kelly is famous, but seems to have been able to maintain a level head. Unfortunately, fame often comes with a price. Someone who calls himself Death keeps calling her and threatening her and her family. Desperate to protect herself and all of them, Kate disguises herself and flees to her small hometown of McCree, where she unwillingly gets sucked back in with her old friends and the one she left behind. Everyone takes care of everyone back there, so it's not surprising that she would want to return. She attempts to maintain her disguise, but in a small town, people are going to figure out things pretty quickly.

A bulk of the story focuses on Kate and her relationship with Dustin, as the two of them try to figure things out again for themselves. Death is omnipresent, yet not at the forefront. The friends work together to devise a plan to protect Kate and to bring down Death, while also enjoying their reunification.

I did have a hard time getting a good sense of the passage of time. For example, it seemed like they were talking about making plans for an upcoming weekend, and then in the next chapter it was suddenly a month later. The narration of the story alternates between Kate and Dustin, which I think had an impact on that. I admit that I wasn't quite sure about the true identity of Death until it was revealed, though it ended up making sense. Overall, it's a sweet story that passes quickly. I felt like it was more a contemporary young adult read, though the characters are 18. I also think you can read this one as a stand-alone, but it's more enjoyable to read the other books first, to understand the backstories of the others. 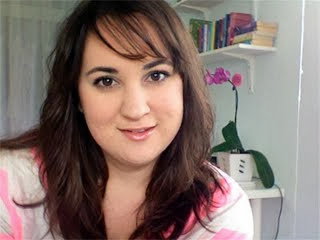 J.C. Isabella is the author of Chasing McCree and The Unofficial Zack Warren Fan Club. Ever since she discovered romance novels in high school, she has been a self proclaimed fan. This led to penning her first YA . When she isn't thinking up new recipes for the cookbook she hopes to one day write, she is brainstorming a new novel and listening to country music. She lives in the tropics of Florida with her big fat Italian family and ornery feline companion.