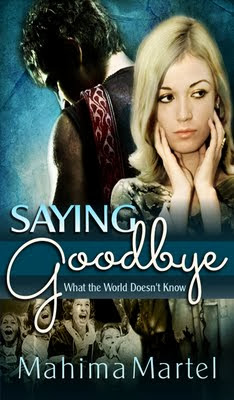 No matter how strong the relationship, or powerful the attraction at some time we all must say goodbye.

In 1964 the winds of change blows across the Atlantic from England to America and sparks a cultural and social revolution. Traditional values of the past are replaced with more modern attitudes caused by the hottest tunes and the latest dance craze.

Vivacious Hollywood starlet Frankie Robinson has no romantic expectations when she meets the dark and introspective Alex Rowley, guitarist for one of the hottest British bands—The Dark Knights. During their first dance, they step into each other's rhythm, as though partners in another life.

For an eager young couple, neither Frankie nor Alex anticipates the scandal their public relationship will cause—reputations must be protected and images need to be maintained. As Frankie and Alex dream of a life together, agents and managers worry of the monies lost and the dangers to their perspective clients. Frankie and Alex are to be kept apart no matter what tragic cost. Behind the closed curtains of celebrity life, Frank and Alex find a way to keep their private love alive despite all obstacles.


Both Alex and Frankie stood up and she walked him to the door, following him outside where dawn had just begun to show in the sky. Alex rapped on the car window to wake Chase. Chase sat upright behind the wheel of the car, immediately ready to go. When Alex turned around, Frankie wrapped her arms around him. They kissed, not wanting to part.

“Wrap it up!” yelled Marcus from the front door.

Alex glanced up at Marcus and then down at Frankie with a sad discouraged look.

“What’s the matter?” she asked.

“I feel like I’m losing my very best friend,” he said.

“You’re never going to lose me. I’m always going to be your friend.”

Alex dared to kiss her once more. “I’ll call you when I get home.”

Alex stepped away from Frankie. He felt he needed to say something to Marcus, but not sure of the words. He settled for, “Goodbye, Mister Robinson.”

Marcus said nothing and merely waited for Frankie to return to the house. She didn’t until Chase had pulled out of the driveway and the car was out of sight. She turned and said to Marcus, “I can’t believe you were so rude to him.”

Marcus didn’t care; Alex Rowley was on his way home to England and away from his daughter.

Mahima Martel - My premierre focus in writing is love within drama, or dramatic love. I am fascinated by the human condition and what drives people to do what they do. Mostly, I have found it is love, or lack of love that motivates people, whether it is to inspire to greatness, or to the depth of depravity. “Saying Goobye, What the World Doesn’t Know,” is based on a true story I uncovered hidden deep within the tabloids of the early 1960’s. I could definately see how the love of these two characters could inspire each other to great heights...and it did so.