Review of 'This Morning I Woke Up Dead' by Mindy Larson What would you do? What rules would you break to be with your soul mate? This morning Hadley Christensen and Dominic Morris woke up living their dream lives. They are engaged and each has promising careers in the medical field. They are happier and more fulfilled than they have ever been, and they are ready to begin their happily ever after.

Sadly, on her way to work, Hadley is in an accident. Before taking her last breath, she realizes she is already dead - and everyone on Earth is too. Now Hadley and Dominic must each find a way to live without one another. How do they continue when they are two parts of one flame?

Hadley is given permission by the Masters to contact Dominic in the hopes he will also realize he is already dead. If Dominic can open his mind to hear Hadley they can be together forever. Is Dominic ready to give up life the way he knows it?

I loved the idea of this story. I traditionally enjoy stories about the Afterlife, because no on can really know what happens up there. Mindy's description is of a beautiful place, where those who have passed on are given tasks that they must complete. They are allowed to interact, somewhat, with those of us still on Earth, who are called the Unknowns. Usually, it is something like encouraging them to tell the truth, protecting them from themselves, and the like. Another is to sometimes convince someone that they are already dead, to prepare them for moving on.

The part about us on Earth having to realize that we are already dead is honestly extremely depressing. I personally choose to not look at life that way. For this story, though, it is essential to the plot.

I also love the idea of soulmates. We are all on some kind of quest to find our perfect match, our other half. Hadley and Dominic have that in each other. To be tragically ripped apart is heartbreaking, on both sides of their relationship. All Hadley wants to do from the other side is to let Dominic know that she is still with him. She wants to be with him, no matter what. Dominic is devastated without Hadley and just wants to know that she is still there. He wants to figure out how they can be together again. Unfortunately, that probably only means one thing. He would have to die, as well.

There are also certain rules that must always be followed. The characters are willing to bend them to be with the ones they love, regardless of the consequences.

Conflicting emotions run rampant in this book. I feel elated to think about life after death, and that loved ones are still with us on some level. I also feel very sad with all of the death. Even those moments of potential happiness are clouded by sadness.I was often reminded of 'The Lovely Bones,' with the descriptions of the afterlife, all of the rules, and those conflicting emotions.

Something else I noticed in this book is the passage of time. Hadley, who is on The Other Side, has no set rules with the passage of time. Nothing is keeping her tethered to it, in the way that clocks keep us tethered to it here on Earth. What feels like a blink of an eye to her may actually be several months on Earth. This was especially evident at times throughout the story, when she and Dominic would take turns telling their own versions of the same memory. I understand the time confusion from Hadley's point-of-view. Sometimes, though, the passage of time was strange when Dominic was telling the story. I had the most difficulty in trying to sort out the truth about his sister's relationship with the two men in her life, as well as her daughter's real age. Somehow the timelines don't quite match up in my mind, or the descriptions of what Ruby is doing seem developmentally different than the other implications of her age. I would come across one of these descriptions, take a few perplexed moments to ponder it, and then made myself keep on reading. I really did enjoy this story, and that carried me through my confusion.

I felt like the story could have ended where it did. But there is an epilogue that reads to me more like the first chapters of the sequel. It's pretty long. Yet I am curious to see where Mindy Larson's imagination takes this story next. 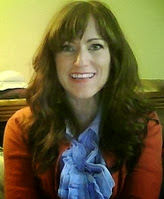 Mindy Larsen has always had a vivid imagination that has only improved with her love of reading and writing. She spent much of her childhood entertaining her three younger brothers with her stories and today she is bringing her imagination to life in books.

When not writing, Mindy enjoys spending time with the love of her life and four children while playing disc golf, cooking, baking, traveling and exploring.