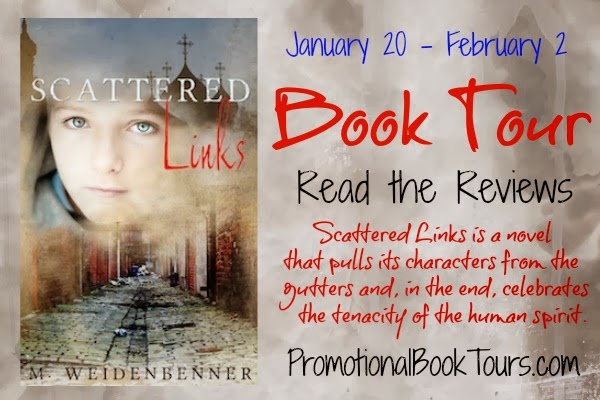 Scattered Links is a novel that pulls its characters from the gutters and, in the end, celebrates the tenacity of the human spirit.

Thirteen-year-old Oksana lives on the streets of Russia with her pregnant mama and abusive aunt—both prostitutes. When Mama swells into labor, Oksana makes a decision to save herself from abandonment, a decision that torments her forever. When her plan fails and her aunt dumps her in an orphanage, she never has the chance to say goodbye to her mama or tell her the secret that haunts her.

Scattered Links is a story of family and the consequences that come from never learning how to love, of a girl’s inability to bond with her adopted family and the frustrations that follow.

How can a child understand the mechanics of forming a healthy relationship when she never had a mother who answered her cries, held her when she was frightened, fed her when she was hungry, or loved her unconditionally?

Only when the child meets a rescued abused horse, and recognizes the pain in his eyes, does she begin to trust again.

Scattered Links, (initially titled Love is Just a Word), was the winner of the 2013 Aspiring Writers Competition, sponsored by Write on Con and The Reading Room. Scattered Links was intended to show a glimpse into the life of a child with RAD, reactive attachment disorder, so prevalent in children who never had unconditional love in infancy.

This novel was inspired by Michelle’s journey to Russia to adopt her orphan daughter. Upon seeing the neglect of orphanage children and learning of the effects of RAD in post-institutionalized children, Michelle researched this disorder, committed to giving her daughter the best chance at a healthy life. Sadly, many parents can’t cope with the behavior from kids with RAD and re-home their children like pets.

This book grabs you by the heartstrings and doesn't let go throughout the entire story. Oksana has been born into poverty and despair. Her plight gets even worse when her mother gives birth, with Oksana being the one to do the delivery. My brain cannot comprehend how a mother can feel so detached from her children, nor how an aunt and sister can be so vindictive and cruel.

Thank God Oksana is stubborn and smart. She takes matters into her own hands, making a connection with a pastor, as well as doing something else to which she cannot admit, until it becomes necessary to do so. Her secret remains well hidden for a long time, and I didn't quite guess it until it was finally revealed.

Oksana is also very lucky. She and her baby sister are both adopted by a family back in America. She is given everything that she didn't realize that she needed: clothes, food, shelter, and love. Her greatest love is between her and a horse named Boris. Animal therapy does wonders for children who have all kinds of special needs. She has a hard time adapting to calling new people her family, and understandably so. I wish Jack and Katie would have known more about adopting children from another country, before they had brought her home. Quite often, parents adopt children from other countries, unaware of the traumas that those children have faced, and are ill-equipped to handle the consequences. Some people get lucky. I would say that Oksana and her situation falls somewhere in the middle.

I feel like Weidenbenner did a great job capturing the voice of the young Russian girl who is completely confused, yet determined to make things right. She is able to take a horrible story, to soften it so that it is palatable to read, yet hit you with the intense emotions. This is definitely an author to keep an eye on in the future.

Michelle grew up in the burbs of Detroit with five brothers. No sisters. Each time her mom brought the boy bundle home from the hospital Michelle cried, certain her mom liked boys better than girls. But when her brothers pitched in with the cooking, cleaning, and babysitting—without drama, Michelle discovered having brothers wasn’t so bad. They even taught her how to take direct criticism without flinching, which might come in handy with book reviews.

Michelle blogs at Random Writing Rants where she teaches and encourages writers how to get published.

Random Writing Rants
Teaching adults and teens how to get published