Check out a deleted scene from 'Murder, Mystery & Dating Mayhem' by D.E. Haggerty

I barge into the police station at full speed nearly running into the desk. “Where are my old ladies?” I ask in between gasps. The sergeant behind the desk raises an eyebrow at me but doesn’t say anything.

Jack almost crashes into me from behind. “Man you’re fast,” he pants. “Where are they?” He asks as his eyes search the area.

I shrug and point to the desk sergeant. She stares at us but doesn’t respond. “Ma’am? We’re here to bail out our friends?”

“Yeah,” I nod. Isn’t that what you do when someone gets picked up by the police? Fortunately, I’m not an expert.

“We don’t do that here,” she finally says after a long silence.

The woman sighs. “I don’t even know who you’re talking about.”

I tilt my head at her confused. I’m sure I saw a police car with the quirky quintet in it. I take a deep breath and rattle off the names of the ladies. “I saw them in a police car coming this way.”

“Have a seat” is her only response.

I look at Jack and raise my eyebrows but he just shrugs. We move to the plastic chairs set against the wall and sit down. Only a few minutes pass before Noel comes out. He swaggers towards us with a huge grin on his face. I collapse in relief against Jack. Noel grabs my hand and pulls me out of the seat. He gives me a hard closed mouth kiss and then rests his forehead against mine. “Those ladies are beyond crazy,” he whispers.

“You’re telling us.” I can practically hear Jack roll his eyes as he responds.

“Please tell me you didn’t arrest them.” I whisper to Noel. He chuckles as he pulls away from me. “Come see for yourself.”

I look at Jack but he just shrugs in response. He stands and we follow Noel to an interrogation room. The ladies are sitting around the table gabbing away looking for all the world as if they’re having a coffee klatch. They don’t even notice us arrive. I clear my throat and wait.

“Oh hi Izzy,” Betty says and then turns to Ally who is sitting next to her. “And did you see the blonde one? I tried to pinch his bottom but he ran away.”

I feel my face heat as I turn to Noel. “What exactly happened?”

Noel leans against the wall and crosses his arms across his chest. He’s back into detective mode. “These ladies decided to check out the mining company. They were demanding to see the CEO and harassing the poor receptionist. Security came and tried to get them to leave but of course they wouldn’t.”

“We had every right to be there,” Betty butts in. The other ladies nod and grunt their agreement.

Noel shakes his head but doesn’t contradict them. “The police were called and they were asked to leave.”

“It doesn’t sound like they did anything bad enough to have them hauled to the police station.” I say and cross my arms, worried that my old lady gang is being targeted because of their relationship with me.

Noel looks at me quickly before turning to the ladies. “Didn’t they?” He raises an eyebrow at them.

The ladies look down at their hands and squirm in their seats. “Oh god, what did they do?”

“I didn’t do anything,” Ally whispers.

“Shush,” Betty says, but Martha speaks anyway. “It’s not our fault. They were just so scrumptious.”

Noel shakes his head and looks to me. “According to the two arresting officers, they were sexually harassed.”

The ladies harrumph. “Everything is sexual harassment these days. Look at us. How could we ever harass anyone.” Betty now looks the picture of innocent. Yeah right.

Jack grabs a seat. “Which officers are we talking about? What did they look like?”

I sigh and bang me head against the wall. Why me? Noel grabs me and pulls me out of the room. He leans his forehead and against mine and whispers. “It’s okay. They’re not under arrest. The officers just thought they’d teach the lady crew a lesson.” He shakes his head. “They have no clue.”

I smile and give Noel a quick kiss. “So I can take them home?” 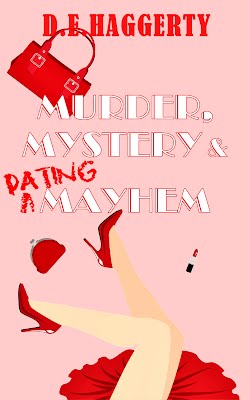 My name is Izzy. I drink too much, am clumsier than a newborn foal, and my brain-to-mouth filter often malfunctions. My daredevil husband killed himself in a parachuting accident five years ago and my best friend Jack has decided it’s time I jump back in the dating pool. He’s perfectly happy to throw me in if I don’t listen. Just when things in the dating world start to heat up, my grandma dies. Only her knitting group of Jessica Fletcher wannabes is sure it’s murder. I’m not convinced but I’m always up for a bit of excitement as long as it doesn’t lead to a night in jail. Well, more than one night anyway. Will I miss my chance at love because I’m chasing imaginary killers? Did someone really kill grandma or am I and my merry band of geriatric thieves imagining things?


“Excuse me,” I say as I try to catch the bartender’s attention. The bartender, however, is more interested in the young girls prancing around than in me. I sigh and lean onto the bar ensuring that the girls are visible. “Excuse me,” I say again, but this time I use a sultry voice – or at least that’s what I’m going for. The bartender finally looks my way and I smile when I see his eyes immediately lured to my cleavage. Gotcha! “Tequila shot with a beer chaser, please.” He jumps to fulfill my order, but nearly trips as he attempts to maintain eye contact with my bosom and reach for the tequila bottle at the same time.

I hear someone chuckle beside me and turn to see a hotter than hot piece of male specimen staring at me. I immediately feel my face burn. The bartender saves me by slamming my drinks down in front of me. I grab the tequila shot and quickly down it before latching onto the beer to soothe my burning esophagus. Good thing I have lots of practice or I would probably spit the beer out like a college freshman during rush week, although I may have coughed just a teensy bit.

Sufficiently fortified, I turn to the man again and notice him watching me. He raises an eyebrow. “I tried that trick earlier,” he says, tilting his head towards the bar, “but the bartender didn’t seem impressed with my assets.” I look him up and down. “You look pretty hot to me,” I say and then slap my hand over my mouth when I realize my comment probably sounded like some lame pick-up line. “Sorry.” Is it possible for my face to spontaneously burst into flames? “Sometimes my mouth opens before my brain can stop it.”

The man laughs and shakes his head. He reaches out to shake my hand just as a loud, obnoxious bell rings. “That’s my cue,” I say as I jump off the barstool. I wobble a bit, and hottie reaches out to steady me with his hand on my elbow. I gasp as a current of pure electricity moves through my arm. I startle and nearly trip in my heels.

I manage to steady myself and smile at Mr. Dreamboat before going off to search for Jack. Before I can find him, I catch sight of another cocktail waitress. I grab a glass of red before locating Jack, who is surrounded by women who are obviously on the prowl. To the casual observer, he seems to be reveling in the attention, but I see his eyes frantically search the room before landing on me. I immediately stalk forward, grab his hand, and pull him away.

I was born and raised in Wisconsin, but think I’m a European. After spending my senior year of high school in Germany, I developed a bad case of wanderlust that is yet to be cured. My flying Dutch husband and I have lived in Ohio, Virginia, the Netherlands, Germany and now Istanbul. We still haven’t decided if we want to settle down somewhere – let alone where. Although I’ve been a military policewoman, a commercial lawyer, and a B&B owner, I think with writing I may have finally figured out what I want to be when I grow up. That’s assuming I ever grow up, of course. Between tennis, running, traveling, singing off tune, drinking entirely too many adult beverages, and reading books like they are going out of style, I write articles for a local expat magazine and various websites, review other indie authors’ books, write a blog about whatever comes to mind and am working on my fifth book.