Introduction to the Shisa by Pauline Creeden, author of 'Survivor'

Introduction to the Shisa:

(Revelation 9:3-9) Then out of the smoke locusts came upon the earth. And to them was given power, as the scorpions of the earth have power. They were commanded not to harm the grass of the earth, or any green thing, or any tree, but only those men who do not have the seal of God on their foreheads. And they were not given authority to kill them, but to torment them for five months. Their torment was like the torment of a scorpion when it strikes a man. In those days men will seek death and will not find it; they will desire to die, and death will flee from them. The shape of the locusts was like horses prepared for battle. On their heads were crowns of something like gold, and their faces were like the faces of men. They had hair like women’s hair, and their teeth were like lions’ teeth. And they had breastplates like breastplates of iron, and the sound of their wings was like the sound of chariots with many horses running into battle. 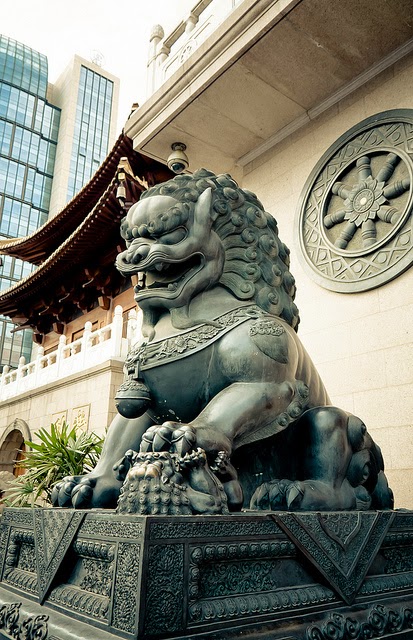 When I first read this description in Revelation of the locusts from the bottomless pit, my mind was immediately drawn to the Shisa or Fu-Dog statues that I’d seen all the time growing up. Several Asian cultures have them, and they are considered to be wards of a house to keep out the bad and keep in the good. Gargoyles in general tend to have made a presence in architecture for centuries.

So what if it’s all prophetic?

People often get glimpses of things that belong only in the spiritual realm, so in my mind, I wondered if all these little statues, which don’t seem to have basis in a real creature that existed in the past, could be glimpses of the future. Taking that idea and the scripture in Revelation, I imagined a creature that would torment and bite humans, causing them pain and a state where they cannot find death (zombie-like). And because the Shisa have breastplates like iron, they would be nearly indestructible. Then came the best part: the warning buzz which would strike terror in all who knew they were coming.

Taking an element from one of my favorite TV shows, Falling Skies, I made the aliens more believable by making them familiar, and slowly adding the other elements described in Revelation, as well…such as the scorpion tail. In the Sanctuary End Times Series, the Shisa are both demons and aliens, making their impact more dramatic and realistic for many readers.


Left Behind for the Hunger Games Generation

In a heart-racing thriller described as Falling Skies meets The Walking Dead, Jennie struggles to find a safe place for what s left of her family. But it seems as though there is no place sacred, no place secure. First the aliens attacked the sun, making it dimmer, weaker, and half what it used to be. Then they attacked the water supply, killing one-third of Earth s population with a bitter contaminate. And when they unleash a new terror on humankind, the victims will wish for death, but will not find it…

When the world shatters to pieces around her, will Jennie find the strength she needs to keep going?

Sanctuary crosses boundaries and borders and incorporates elements of all kinds of action and intrigue, from thriller-like adventure to a post-apocalyptic tale of life after aliens invade. Thus it will delight readers seeking something truly different, while disappointing those who anticipated a shallow, one-dimensional subject and story line.”

Pauline Creeden is a horse trainer from Virginia, but writing is her therapy. In her fiction, she creates worlds that are both familiar and strange, often pulling the veil between dimensions. She becomes the main character in each of her stories, and because she has ADD, she will get bored if she pretends to be one person for too long.