Sebastian and the Tarot Cards - Thoughts by Debra Kristi, author of the Mystic's Carnival Collective Stories

Sebastian and the Tarot Cards by Debra Kristi

Hi! I’m thrilled to be here and thought it would be fun to touch on Sebastian’s deck of tarot cards. He reads the cards for Mystic’s Carnival patrons and can be rather theatrical, with skull makeup and a cloak. Maybe he’s channeling his dark side. Maybe he’s trying to hide his face. Or maybe he’s just looking for a larger tip. I’ll let you draw your own conclusions―for now.

To make the cards believable to the reader, Sebastian had to show just enough without bogging the reader down with too much information. I decided to give him his own style to reading the cards. It was a little scary. There is always the chance that someone who knows the details a thousand times better will complain, but it was a chance I was willing to take…after much research.

One does not just write a tarot card reader into book and give them nothing to work with. Sebastian had to know his stuff, which meant I had to know my stuff. I poured through books and went to reading, seen the cards dealt countless ways. The last reading I had done, the guy threw the cards on the table every which way. The entire deck! He read them based on which cards fell where and at what angle and in which order. He was so fast it was hard to follow, but the experience really fueled my muse where Sebastian was concerned.

Last year I traveled to New Orleans to research a different book. But of course, New Orleans is a treasure trove for someone in Sebastian’s line of work and I couldn’t pass up the opportunity to explore. I found my way to a shop perfect for furthering my education in the art. They stocked everything I could possibly imagine needing. I picked up several decks that day. I would later come to realize Sebastian used a custom deck created especially for him and his purposes. Those purposes being other than reading the cards for the patrons.

I had the brilliant artist Carrie Osborne create some creepy, cool skull cards for Sebastian. The dragon skull ended up on the cover (of course!). 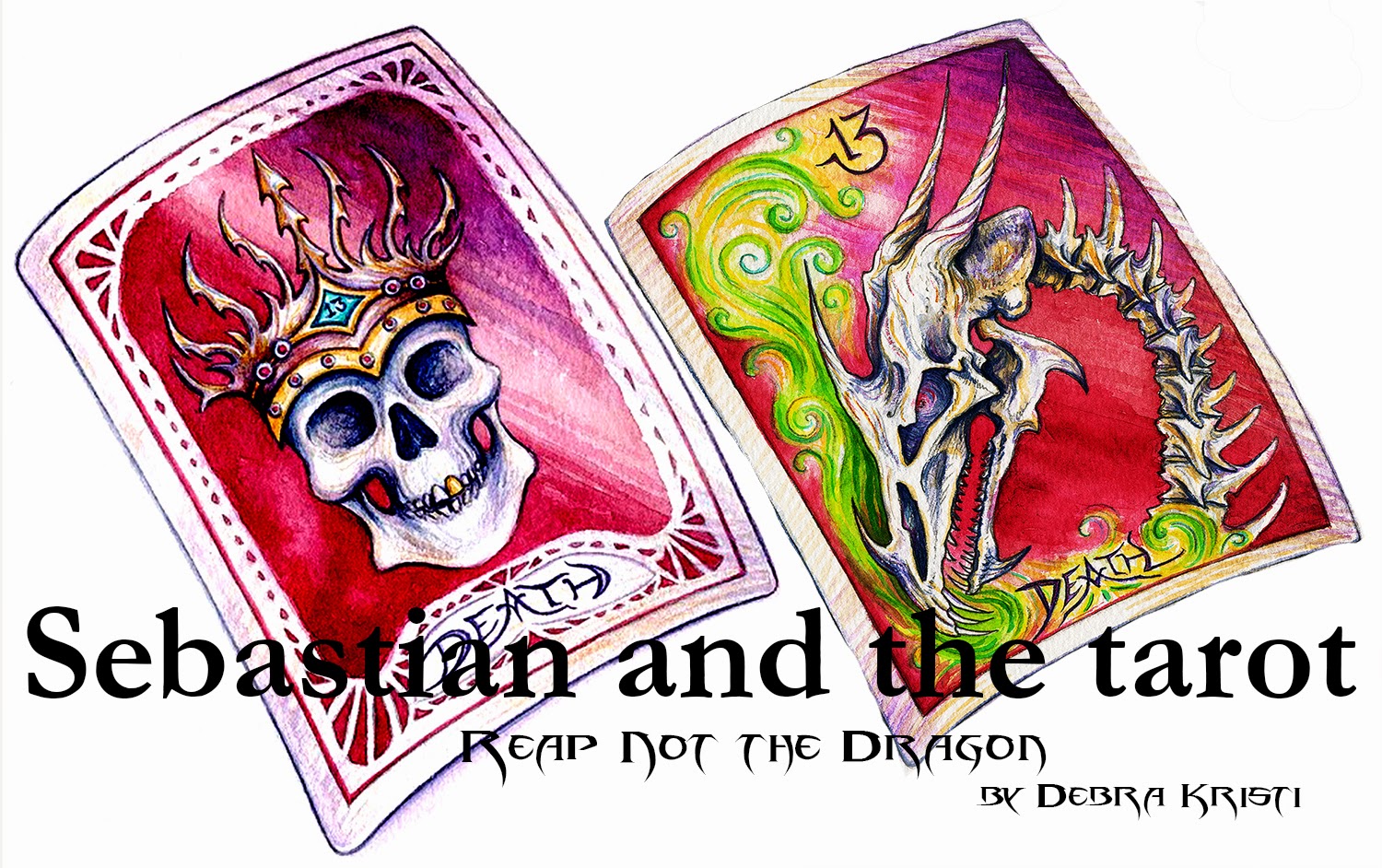 Do you think Sebastian should get a deck of cards based on the carnival and the cast? Wouldn’t that be something special?

I had so much fun writing these books and sharing about my tarot card experience! I want to take a quick moment to thank the readers and fans, because you are the most important part of being a writer. Also, a huge thank you for having me here today! It has been a pleasure, and all the support is truly awesome. Wishing you all kinds of crazy magic in your daily life.

A Magical Universe… Hidden throughout the worlds are magical portals leading to the secret dimension where Mystic’s Carnival is nestled. A self-aware fair that is both carnival and circus combined, and filled with a plethora of supernatural and paranormal beings.

Performers and runaways, Kyra and Sebastian, are away visiting the human realm when they find themselves at odds. Stay hidden, or interfere with a human’s destiny?

Kyra thinks saving Marcus’s life is easy – slick as dragon snot – and a one-time deal. The resulting bond tying her to him and enslaving her as protector is unexpected.

She didn’t expect one good deed to turn into an endless chain of good deeds. Or to complicate the relationship with her best friend, Sebastian. And she especially didn’t expect it to place her life on the line.

Kyra’s dragon must keep Marcus alive and salvage her relationship with Sebastian without losing herself or dying.

Love is stronger than fear…or is it?

The last thing Sara remembers is a conflicted night out with her boyfriend, Matt, and laying out under the dark night’s sky. How she came to be seated among the crowd under the Big Top is a mystery. When and how did she get there? She doesn’t wait to find out. Whether it’s due to basic fear or the scary, hideous clowns, Sara and Matt run. Run beyond the tent walls into the deep, dark alleys of the carnival. What they find along their mad dash to the parking lot will have them redefining their idea of fun zones, thrill rides, and date nights. Fear is an eat-you-alive monster. Refusing to be defined by that monster, they will confront those fears. What they find?

Perceptions can be excruciatingly misleading…and some monsters have hidden claws.

A Reaper with a mission.

Sebastian is finished following commands. Higher powers be damned. He has his own agenda – find Kyra and help restore her memory.

At first his plan goes better than expected. But as life starts looking up for the would-be Reaper, his metaphorical sickle becomes caught in a web of complications.

Things are never smooth for Sebastian and Kyra.

A detour?unexpected and unwelcome?delivers Sebastian into the depths of an grave situation. Misfortune and misunderstanding are the cards dealt to him. And events fail to flip in his favor.

Creatures from hell all want a piece of the young Reaper. If Sebastian ends up dead, that’s okay. For he has a more grievous beast to worry about. To save the woman he loves, Sebastian will venture into the heart of an all-powerful fire demon.

Sebastian must find a missing dragon and the key to Kyra’s memory without being devoured by sinister beasts or?even worse?consumed by his own inner demons.

Debra Kristi found it rather dull always staying tethered to reality. She decided to let whimsy get the best of her, and with the help of her muse she began bringing magical stories to life in 2010. It’s been nothing but write, write, write and type, type, type ever since. Born and raised a Southern California girl, she still resides in the sunny state with her husband, two kids, and three schizophrenic cats. A lover of fanciful stories at a young age, she hadn't realized the writer bug infected her until much later in life. As a result, her stories pull from a rich history of experiences. When not busy drumming away at the keyboard or chatting it up on social media, Debra is hanging out creating priceless memories with her family, geeking out to science fiction or fantasy television, and tossing around movie quotes.