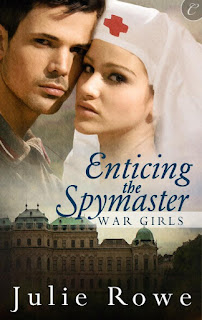 Judith Goddard is hiding in plain sight. A dual citizen with family ties to Belgian royalty and the British military, she works as a Red Cross nurse in a German hospital, learning what she can, ever fearful her true allegiance will be discovered.

British Expeditionary Force Captain Michael Lawrence is on a mission to rescue the daughter of his mentor. He doesn't expect to find a strong beautiful woman in place of the naïve girl whose love he rejected years earlier.

Jude is shocked when Michael turns up in her hospital, wounded and in German uniform. Though he broke her heart, she agrees to flee Belgium with him—she has information about an imminent attack that she must deliver to the British War Office, before it's too late.

Posing as a married couple, Jude and Michael journey to the border, in constant danger of discovery—and of giving in to their mutual passion…

The ballroom of the Belgian Royal Palace had rarely been this full. Not even on special occasions when the royal family invited guests from around the world to celebrate momentous events.

Judith Goddard stood in the main doorway, looked out across the room and swallowed a mouthful of worry and fear. So many men in the room, most young, one hundred sixty-three at last count, but she wished it were empty. She wished none of them were here at all.

A ballroom like this should be filled with music, light and elegantly dressed couples dancing to an orchestra. Not rows of wounded men, their clothing torn and bloody, their groans and harsh whispers the only sounds. But the rank smell of burnt flesh and old blood overpowered everything else. She stepped inside, approaching one of the wounded who'd just come out of surgery, and wondered if the stench would ever come out of her hair or clothes.

Possibly, if one used enough soap.

Would it be possible to wash away the smells of suffering and death from her memory?

Since the war started, she'd seen a never-ending stream of wounded. The palace had been completely overrun by the German army at the beginning of their aggression. First as a military headquarters, but within weeks the larger ballroom had been converted into a hospital.

She focused on the man she was caring for, bandaging his leg where the surgeon had stitched the skin closed. There wasn't time for woolgathering.

There wasn't even time for regrets.

"Nurse? Nurse, can you help my friend?"

Shock held her immobile for several long moments as she gazed into the face of Captain Michael Lawrence, a protégé of her father. A man who shouldn't be in the middle of an enemy hospital, miles behind enemy lines, surrounded by enemy soldiers. A man she'd been in love with for years.

Her heart pounded out a fast tango in her ears as she stared at him wide eyed, taking in his muddy clothing. Michael, a proud member of the British Expeditionary Force, was wearing a German infantry uniform.

Frowning, she opened her mouth to demand an answer to the first of many questions, but he spoke before she could with a sad, tired lift to one side of his lips.

Wearing a German uniform and speaking German with the accent of a man from Hamburg.

Behind him, a wave of men staggered into the once elegant ballroom. Some on their own, most in pairs and threes holding each other up, all of them wounded. Nurses directed them to any open space.

She swallowed her questions. "Yes, of course. I'll be right there." She tied a knot in the bandage, securing it around the stump that used to be a leg. Thank God the soldier was still unconscious.

Watching Michael out of the corner of her eye, she washed her hands in a basin of bloody water with a narrow bar of strong soap, then shook them dry. He led her across the ballroom, manoeuvring around gurneys, cots and pallets littering the floor.

Michael brought her to a man whose breathing was visibly fast and shallow. She grabbed a canteen of clean water and knelt next to him. "Here's the water. Drink it slow."

He pursed his mouth to catch the precious liquid, but his lips wavered and his head dropped back so it spilled across his face. Julie Rowe’s first career as a medical lab technologist in Canada took her to the North West Territories and northern Alberta, where she still resides. She loves to include medical details in her romance novels, but admits she’ll never be able to write about all her medical experiences because, “No one would believe them!”. In addition to writing contemporary and historical medical romance, and fun romantic suspense for Entangled Publishing and Carina Press, Julie has a short story in the Mammoth Book of Medical Romance.

Her book SAVING THE RIFLEMAN (WAR GIRLS) won the novella category of the Gayle Wilson Award of Excellence. Her writing has also appeared in several magazines such as Today’s Parent, Reader’s Digest (Canada), and Canadian Living.