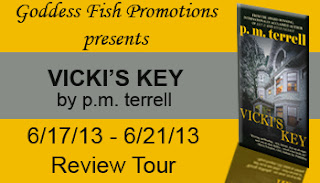 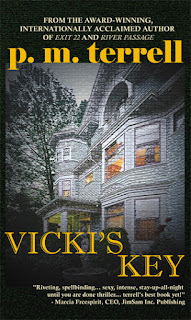 Following a failed mission, Vicki Boyd leaves her job as a psychic spy with the CIA, determined to start her life over in a small town assisting an elderly lady. But when she arrives, she finds that Laurel Maguire has suffered a stroke and is confined to the third floor of her home and her nephew Dylan has recently arrived from Ireland to care for her. Vicki very quickly falls in love with the charming, handsome Irishman. But all is not what it seems in Aunt Laurel’s old, rambling home. And when the CIA arrive on her doorstep to convince her to accept one last mission, she finds her past and her future are about to collide… In murder.

Vicki let the end of the towel drop so it brushed against her knees as she held the top against her breastbone. With one hand, she pulled the shower curtain back.

He returned her stare silently.

“How long have you been there?” she asked, tugging the towel to cover her breasts.

She felt exposed, though the towel was doing an adequate job of covering the front of her body. But his eyes didn’t waver from her face while his own remained entirely expressionless. The rage he’d displayed earlier was gone, and so was his broad smile. He simply looked at her impassively as though he was immersed in his private thoughts.

“What are you doin’ here?” he asked, finally breaking the silence.

She clasped the towel to her. “I—I was taking a shower.”

She thought of the shower in her own private bathroom, and how insensitive she must appear to have let herself into his private space without asking. She opened her mouth to respond but the words would not come. “I—I” was all she could manage.

He dropped his hand from the doorframe. Without taking his eyes off hers, he moved deliberately across the bathroom until he stood in front of her. His eyes wandered to her hair, and Vicki realized she was trembling from the air conditioning against her wet skin. Without speaking, he took her towel and wrapped it around her. As the bath sheet was draped around her slender body, he took the corner and began to gently rub her hair with it. He stopped after a moment, his hand against her face and gazed at her cheek as he brushed it with his thumb.

“What were you cryin’ for, Woman?” he asked.

There is a reason that p.m. terrell is an award-winning novelist. This book has plenty of action and suspense, to keep you glued to your Kindle or paperback, as the scenes unfold in front of you. They are so clear that you can envision them taking place on the big screen.  Those who love those CIA thrillers are going to love this book

Vicki is a fun character, with her psychic abilities, known as a "remote viewer." She is pretty vulnerable at the start and has to regain confidence in herself again. Enter Dylan Maguire, the lovely Irishman, who will make readers swoon, as well. The romantic element adds some heat to the fire.


p.m.'s biography demonstrates why she is the perfect writer for a CIA suspense thriller, and why she is able to carry it out so well. This is only one book in the Black Swamp Mysteries series. I look forward to checking out the other ones! 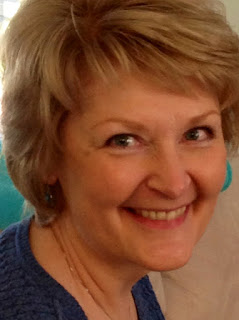 
p.m.terrell is the award-winning, internationally acclaimed author of more than 18 books in 4 genres. A full-time author since 2002, she previously opened and operated two computer companies in the Washington, DC area. Her specialties were in the areas of computer crime and computer intelligence and her clients included the Secret Service, CIA and Department of Defense as well as local law enforcement. Computer and spy technology are two themes that recur throughout her books. She is the co-founder of The Book 'Em Foundation, whose mission is to raise awareness of the link between high illiteracy rates and high crime rates. And she founded the annual Book 'Em North Carolina Writers Conference and Book Fair which takes place each February.

Author's blogs: www.pmterrell.blogspot.com and www.vickisangelfish.com (inspired by the angelfish "front" used by the CIA in the Black Swamp Mysteries series)

p.m. will be awarding a $20 Amazon gift card to one randomly drawn commenter. Follow the tour for more chances to win!
Posted by Andi at 3:30 AM