Review of Murder: Double or Nothing by Lida Sideris

Welcome to the review tour for Murder: Double or Nothing by Lida Sideris! This mystery novel has one of the quirkiest cast of characters I've read in a while! Get more of my thoughts, plus a sneak peek into the book below. Follow the tour to read others' thoughts. Let the author know what you think in the comments. And then win a book in the giveaway! 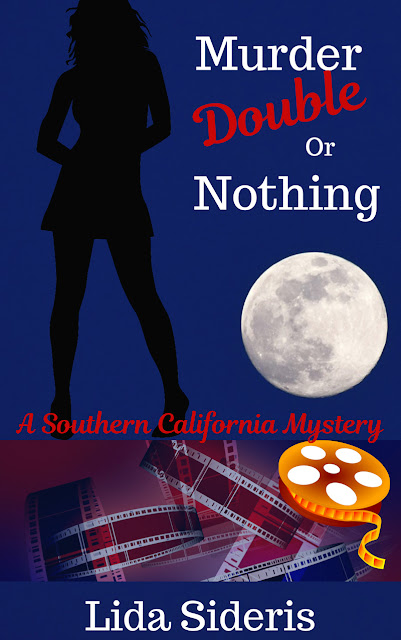 Murder: Double or Nothing

Corrie Locke, newbie lawyer and daughter of a late, great PI, is learning the ropes at the Hollywood movie studio where she works--and where things are never what they seem. Life imitates art when a fictional murder attempt turns real--right before her eyes.

With more than a little help from friends and a crazy movie legend, Corrie trips down a trail littered with wisecracks, mysterious messages, and marginally legal maneuvers to track down the killer. Meanwhile, clues keep disappearing and Corrie makes an enemy whose deadly tactics keep escalating. Will her impromptu sleuthing skills be enough to catch the mysterious assailant before he takes her down?


He pedaled the bicycle hard and fast down the narrow, deserted alley, stealing glances behind him. It was a late, warm Friday afternoon somewhere on the eastside of Los Angeles where police protection was scarce and hoodlums plentiful. Two and three story buildings huddled together on both sides of the rider. Graffiti stained the walls.

Hunched over the handlebars, the cyclist whizzed past a dented metal dumpster, unsettling newspapers and milk cartons pressed against a doorway. The collar of a gingham dress shirt stuck up beneath his red pullover and a backpack flopped behind him. Chuck Taylors clinched his nerdiness, as did the argyle socks. He looked fresh out of a computer lab, on his way to the library. There was nothing unusual about him, if you didn’t count the bulging eyes, gritted teeth and heavy panting. His expression belonged on a trapped animal.

A black sedan barreled around the corner, tires grinding and coughing up pieces of asphalt. Leaning his torso out of the passenger window, a muscular guy in a white T-shirt clutched a revolver. He aimed at the cyclist, fired three times and missed.

The rider angled around a corner and skidded to a stop. Dropping the bicycle on its side, he stumbled over the upturned wheel moments before the car crushed the bike beneath its fat tires, spitting out a tangle of metal and chrome. The car parked, and two thugs spilled out. They raced after the cyclist, guns drawn. The nerd careened toward the side of a brick building and jumped up, arms outstretched above his head. The silver cuff around his wrist glinted as he grabbed the bottom rung of a fire escape ladder, legs flailing wildly. The ladder creaked and swayed. He’d barely started the climb when the hoodlums fired. And missed again.

The nerd scrambled onto a landing and dove through an open window.

**My thoughts**
This is one of the quirkiest set of characters I have seen in quite a while! Corrie is a relatively newly minted lawyer who also works as an amateur detective. She was raised by a very famous PI who passed away a year ago (or did he?) and who taught her everything she knows. She learned how to be a PI, as well as some illegal maneuvers to protect herself and get some information.

Then there is her boyfriend Michael, who is trying to learn how to keep up with her, and his best friend Jason, who is extremely attractive and has a weird history with Corrie. Lacy is the elderly woman with whom the victim was living, who seems to know a lot more than she ever divulges (which can be quite maddening!) and likes to control every situation around her. And then there are all of the people at the studio who have little tidbits of information slowly being pulled out of them. The real detectives seem a lot dumber than they should be.

And of course, Corrie puts herself into danger as she pursues information in this case, which she accidentally found herself in the middle of.

I felt more like I was reading something in the cozy mystery genre as opposed to a regular mystery, but I guess that's neither here nor there.

It is the third book in the series, which means there is a lot of backstory on characters like Corrie and Michael. You get hints about this background, but not a lot of detail. A lot of it, you almost don't need to know to understand and appreciate this story for what it is. But at the same time, I felt like I was missing out on some information and wanted to go back to the first two books to fill in those small gaps.

As Corrie pursues her own investigation, she gets stonewalled by witnesses and professionals. Information is given or merely hinted at. You feel like you're in a front-loading washer getting tossed around as you're also trying to make sense out of the bits and pieces. I found myself asking WTH on a regular basis. And yet, I didn't want to put the book down. I had to find out what those weird little pieces were adding up to be and make them fit, just as much as Corrie was trying to do.

It was an interesting ride and somewhat different than others I have read this year, but was a fun one to go on.

Thank you to the author and Goddess Fish for the review copy. All thoughts and opinions are my own.

Lida Sideris' first stint after law school was a newbie lawyer's dream: working as an entertainment attorney for a movie studio...kind of like her heroine, Corrie Locke. Lida lives in the northern tip of Southern California with her family, rescue dogs and a flock of uppity chickens. She was one of two national winners of the Helen McCloy Mystery Writers of America Scholarship Award for her first book.


Lida Sideris will be awarding a copy of the book (US ONLY) to a randomly drawn winner via rafflecopter during the tour.