The Sin Eater by Jack Maro 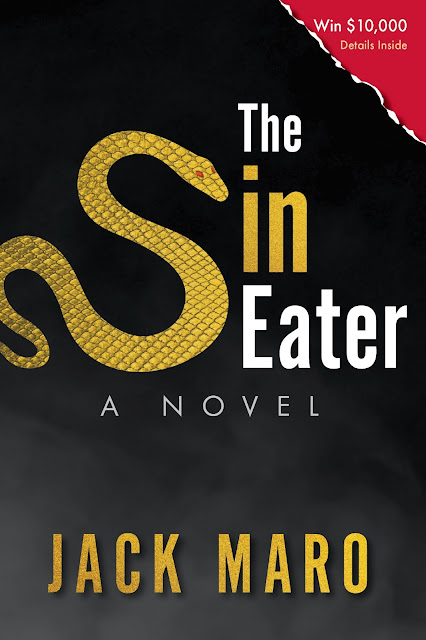 An unconventional rabble-rousing lawyer is gone. Suspended from an elite firm for the extreme behavior he performed on behalf of his clients, he has now departed with the intent of keeping his whereabouts unknown.

The firm needs him back to address a problem that threatens their very existence — and probably their freedom. One of the four partners has died, and another has become comatose. Both hold the key to the inner workings of the firm’s complex financial structure, having been secretly infused into an intertwining set of legal trusts and financial ruses.

Bri, the senior partner’s estranged daughter and the firm’s former lead investigator, has been summoned to deal with her father’s condition and to seek out the missing lawyer, a man who happens to be her ex-boyfriend. Jeffrey, her former protégée and replacement, accompanies her on this quest.

Their search brings them into contact with a whimsical cast of characters who provide new information concerning the whereabouts of the missing lawyer. Bri and Jeffrey traipse across multiple states, searching for him and the pieces he has left in his wake. Instead they find a story full of intrigue, humor, and philosophical overtones that has the potential to reveal the beginnings of a sordid secret.

Available on Amazon
(affiliate link)
$0.99 for a limited time!

I was compensated via Fiverr for sharing this post. I only share those books that I feel will be of interest to my readers.
Posted by Andi at 8:02 AM