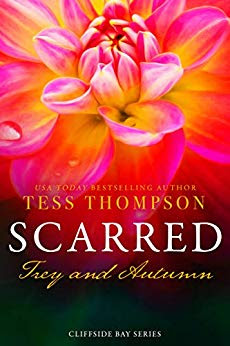 For Autumn Hickman, online dating has been an exercise in nothing more than coffee and failure. There simply isn’t a man on the planet who can compare to her best friend, Trey Wattson. And while Trey is everything Autumn has ever wanted in a partner, she knows the man who loves life’s most beautiful things could never cherish anything as scarred and mangled as her.

Trey Wattson is in love with his best friend, but he can't seem to reach her. She’s guarded, and for good reason, but Trey doesn’t care. He knows Autumn’s soul, and it’s the most beautiful thing he’s ever seen. Desperate to claim Autumn’s heart for his own, Trey conspires with The Wolves to create a fake profile on the dating site Autumn frequents. But the more Autumn trusts Trey’s online persona, the more it becomes clear that Trey is gambling with the very thing he wants most of all.

Return to Tess Thompson’s beloved Cliffside Bay and discover for yourself why true love is built on honesty and trust, and why best friends often make the very best life partners, in this anonymous online romance set in your favorite charming small town.

**My thoughts**
Autumn has physical scars that have prevented her from getting involved with anyone. Trey has emotional scars from his horrible ex-wife, making him unavailable. Pursuing a man like that is not worth it until he is ready, believe me.

And now Trey is finally admitting that he is in love with Autumn, but isn't sure how to convince her to take their friendship to the next level.

Trey and the Wolves concoct a plan, with her brother Stone's permissions, to create a fake profile on the dating site she has been using to try to win her over that way. They liken it to the movie You've Got Mail. I am really torn on this tactic, because it could go either way. She's either going to be swept off her feet or extremely pissed that he lied to her. A good book will have elements of both.

I have no idea what I would do in that situation. In my younger years, I may have swooned. Now I feel the opposite. But at the same time, it is giving him some insight on how to get through to her. I admit I kept vacillating through the story.

Trey's pain is familiar to me as I went the opposite in my longest relationship, starting with dating the man who was so scarred by his ex-wife to becoming best friends instead. Autumn's pain actually makes me want to cry as she goes through the motions of self-doubt.

Autumn's scars, of course, go much deeper that just the physical ones, including bits of her past and upbringing, which are also discussed in other books featuring her brothers. She is given an amazing opportunity to reconnect with someone from her past that made me emotional. And then a whole scene with some of the other women sharing their own scars literally brought me to tears.

Another great installment in this series.

Thank you to the author and publisher for my advance review copy. All thoughts and opinions are my own.