Review of Waiting for a Miracle by Jennifer Wilck

Welcome to the review tour for Waiting for a Miracle by Jennifer Wilck! Today I have an excerpt to share with you, as well as my own thoughts on this story. Be sure to follow the tour to find out what other people are saying about this book as well. Let the author know your thoughts. And then be sure to enter the great giveaway at the end! 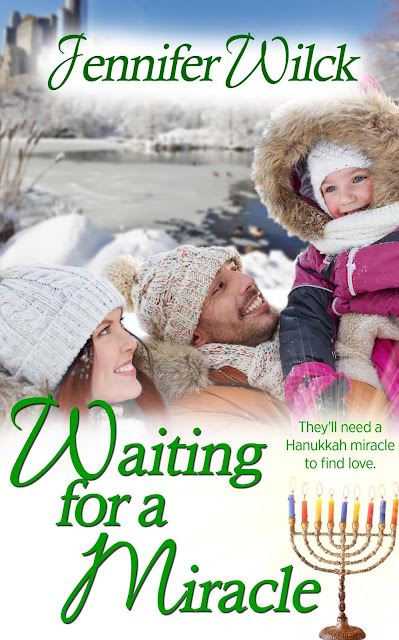 Waiting for a Miracle

Benjamin Cohen, widowed father of six-year-old Jessie, is doing his best to hold it together through order and routine. The last thing he needs is his matchmaker mother to set him up with her next door neighbor, no matter how attractive she is.

Rachel Schaecter's dream of becoming a foster mother is right within her grasp, until her meddlesome neighbor tries to set her up with her handsome son. What's worse? He's the father of her favorite kindergarten student! She can't afford to let anything come between her and her dream, no matter how gorgeous he may be.

Can these two determined people trust in the miracle of Hanukkah to let love and light into their lives?

When Jessie wanted to make Rachel a Hanukkah card, he’d thought it was a great idea.

He’d paused. She’d written “love.” Maybe it was time to let her know he was interested if Rachel hadn’t gotten the hint from his kiss. But a kiss could be accidental. Was his an accident? He hadn’t thought about kissing her ahead of time. If anything, his thoughts were occupied with Rachel’s plans to foster a child, how her plans would change her life, and how those changes would affect his daughter. But desire overtook him, the kiss necessary and natural as breathing, at least to him. So what did it mean?

It meant he wanted to venture outside of the box he’d built for him and Jessie. He wanted to get to know Rachel better and see if she shared the same feelings. She loved kids. She was a great teacher and loved his daughter. Did she want to have children of her own someday? There were so many questions he needed to have answered. So he’d strategized how to get Rachel to fall for him. Throwing caution to the wind, for once in this new life of his, he’d gone ahead and signed his name.

He’d assumed she’d call, if only because his name was on it. Was he stupid? Presumptuous? He had no idea. But he wanted to convince Rachel she was wrong, that they could get to know each other outside of school, without worrying about consequences. He planned for the card to be an opening. She’d made it clear they couldn’t cross the line. He wanted her to see the line was negotiable.

He needed to make his message a little clearer.

**My thoughts**
In the midst of a zillion Christmas romances, it's kind of fun to have one pop up that revolves around Hanukkah. After all, that is a holiday based on a miracle as well, right? So why can't it inspire a miracle in the realm of love?

Rachel and Benjamin are both lonely this holiday season and looking for love, though they are not necessarily consciously aware of it. Rachel's ex-boyfriend had cheated on her and Benjamin's wife died a few years ago. Benjamin's mother is Rachel's neighbor, and she is quite sneaky and adamant about pushing the two of them together. It made me laugh a bit and reminded me of how my parents used to manipulate different situations to do the same thing to me. She means well, though perhaps her methods are a little questionable as she forces the encounters, and not always so gently.

The main obstacle at this point is that Benjamin's daughter Jessie is in Rachel's kindergarten class. Rachel and Jessie do have a special relationship, which I know can happen between a teacher and student, especially a child who is in need of a maternal figure. But oh, dating a parent while the child is in your class can be a huge problem, whether or not it is in the employee handbook. I want to tell them to just hold on until the end of the school year and then themselves go for it. It could be frustrating to wait, but it would cause less disruption and probably fewer problems. And I know Rachel is aching to be a foster mother and is concerned about how this would impact her chances.

Plus they really need some time to get to know each other and to keep working on their communication skills. When Benjamin's wife died, he relied on strict structure to get through each day. Rachel doesn't like that, especially because her ex was so controlling, and it causes a lot of friction between the two of them. If they are going to make this work, they need to take it slow. But in this story, they are off to a good start.

They are definitely attracted to each other. At first I found it odd that they hadn't really interacted prior to this holiday break, so this attraction was new and kind of out of left field for each of them. I had to remember this was a different kind of school than I taught at and you don't have as much parental interaction as I did. I think if they did have that kind of interaction, they would have gotten themselves into trouble with their attraction much earlier!

I appreciate that this is a slow burn kind of a story. It is short, so it whets your appetite for a bit more. But during a crazy holiday season, it's also nice to read a shorter story, because I could do it in one sitting. I do want to revisit them some time in the future to see how things are going.

Thank you to the author and publisher for supplying me with an advanced review copy via Goddess Fish. All thoughts and opinions are my own.


Jennifer started telling herself stories as a little girl when she couldn’t fall asleep at night. Pretty soon, her head was filled with these stories and the characters that populated them. Even as an adult, she thinks about the characters and stories at night before she falls asleep or walking the dog. Eventually, she started writing them down. Her favorite stories to write are those with smart, sassy, independent heroines; handsome, strong and slightly vulnerable heroes; and her stories always end with happily ever after.

In the real world, she’s the mother of two amazing daughters and wife of one of the smartest men she knows. She believes humor is the only way to get through the day and does not believe in sharing her chocolate.

She writes contemporary romance, some of which are mainstream and some of which involve Jewish characters. She’s published with The Wild Rose Press and all her books are available through Amazon and Barnes & Noble.

Jennifer Wilck will be awarding a $25 Amazon/BN GC to a randomly drawn winner via rafflecopter during the tour.